If you spend time on the internet, you will witness grammar arguments—namely, the importance of correct grammar to some and their ire at those who use it incorrectly. From memes to Facebook posts to corrective Tweets, there’s no end to reminders that “your” is possessive and “you’re” means “you are.” Cecelia Watson, author of Semicolon: The Past, Present, and Future of a Misunderstood Mark, explains that she used to have visceral reactions to grammatical errors. But her new book illuminates how arbitrary the rules are, utilizing the semicolon as a means to explore punctuation’s place in writing and reading.

The central idea driving Watson’s narrative is that the semicolon has been a polarizing punctuation mark since its creation. Invented in the late 1400s by Italian humanist Aldus Manutius, the semicolon was just one of many punctuation forms tested during the 15th century. But unlike others, it proved to have staying power—even if its place has been a contentious one for the past several centuries.

Much of the book isn’t about the semicolon; it’s about the ways in which punctuation is codified as a set of hard rules that are constantly challenged. Watson writes about the unending war between grammar and style, how attempts to make punctuation and grammar a science changed the way we thought about the two, and the feuding grammar guide authors who built up the notions we now believe about correct punctuation. 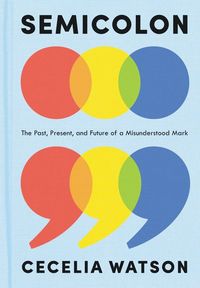 As Watson points to instances when semicolons wrought legal mischief or caused fights between editors and authors, it isn’t entirely clear what she’s arguing. The facts she pulls together are intriguing, such as the legal case that saw Massachusetts battling for years over whether a semicolon a) belonged in a legal statute about liquor sales and b) whether it justified a ban on sales after 11 p.m. And her analysis of semicolons in works by writers like Raymond Chandler and Rebecca Solnit is fascinating, encouraging the reader to ponder what the semicolon does to their own reading experience. But the sum of these parts is unconvincing.

If one is predisposed to the semicolon, there is ample defense of it here; if one is not so predisposed, Watson’s book won’t tip the scales. There’s little to suggest that the semicolon is different from any punctuation mark, be it the comma or the hyphen, in terms of provenance and the conflict it drives between style and grammar.

Punctuation also intersects with society in ways that amplify divisions, particularly socioeconomic ones. Although she discusses the fact that some people find grammar easy to grasp while others struggle, Watson doesn’t consider the nuances of privilege around what forms of expression are considered correct. “The semicolon is a place where our anxieties and our aspirations about language, class, and education are concentrated,” she writes, but Watson doesn’t follow up with analysis that does justice to this idea. Missing as well is the semicolon’s place in cultural spheres beyond writers and readers; there’s no discussion of its place in internet linguistics, which is changing the way punctuation is used.

Semicolon fails to justify centering the titular punctuation mark at the heart of its story, which seems like an arbitrary choice given that much of the book’s analysis isn’t about the mark. It’s about style, interpretation, understanding, and the place of punctuation within the larger frame of language.

Watson says punctuation spells out the unsaid in language, which is an engaging way of exploring a facet of written language. But as a case for the semicolon, her book falls short.

Bridey Heing is a freelance writer based in Washington, DC. More of her work can be found here.