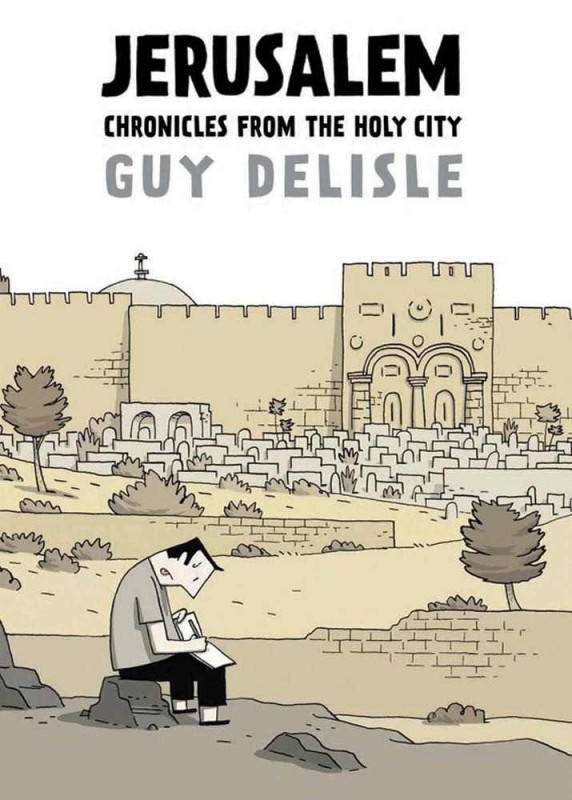 With its status as winner of the Fauve d’Or, or best comic book award, at this year’s Angouleme Comic Festival, a pretty serious honor, and its topic (the artist’s year in Israel with his wife, who works for Doctors Without Borders, and children), one could easily anticipate some major heaviness from Guy Delisle’s latest. Don’t shy away, though. Luckily, the volume itself is mostly literally weighty, addressing complex and heated issues with grace and deft charm. Delisle doesn’t pick sides, and he doesn’t let anyone off the hook, but he also doesn’t preach or depict himself in any noble light. The result seems to be a very real and well-rounded picture of day-to-day life, a journal comic that happens to be as much journalism as autobiography, with plenty of lightness that also doesn’t trivialize the situation in Jerusalem. Delisle’s self-awareness is excellent, but he has enough going on around him that the book doesn’t devolve into pure navel gazing, and, somehow, the visuals are compelling, even with umpteen panels of the artist himself sketching in a cafe, on a street corner, or in a park. Smart and fun, Jerusalem is undoubtedly one of the highlights of this year in comics. (HB) 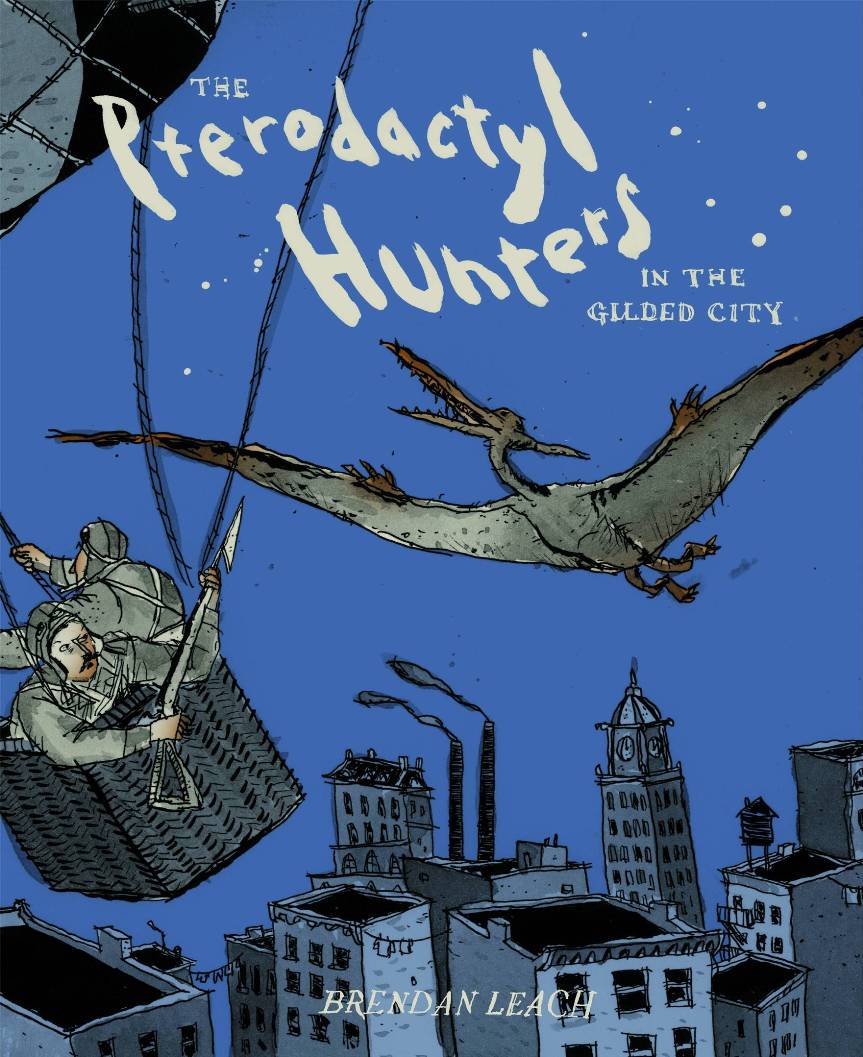 The Pterodactyl Hunters in the Gilded City
by Brendan Leach
Top Shelf, 2012
Rating: 8.2

Brendan Leach’s debut looks like another high concept genre gimmick, with pterodactyls plaguing New York City circa 1905. This slim graphic novel (and 2010 Xeric Award winner) has more depth than most works that freely mix historical eras with such boyhood fascinations as robots, monsters and dinosaurs. Leach builds his own little compelling world with minimal effort, with only a few lines of dialogue and a newspaper front page filling in all the history and details we could want. It’s a world that looks like real world turn-of-the-century New York but with bands of municipal employees in hot air balloons hunting flying dinosaurs with harpoons and sticks of dynamite. Leach focuses less on the action or the backstory than on the family drama surrounding a young would-be ptero hunter wilting in the shadow of his older brother, who is the most celebrated ptero slayer of the day. Gilded age dinosaur hunters might sound like one of DC’s old Silver Age larks, but Leach approaches it with a literary sensibility, pinpointing the jealousy, shame and fear that motivates and paralyzes the younger brother. If pterodactyls really did plague the gilded age, this is the story Stephen Crane would’ve written about the intermittently brave men who undertook the fight. Leach’s scratchy, cartoony artwork probably would have been sneered at back then, but it’s a strikingly distinctive style for a newcomer. (GM) 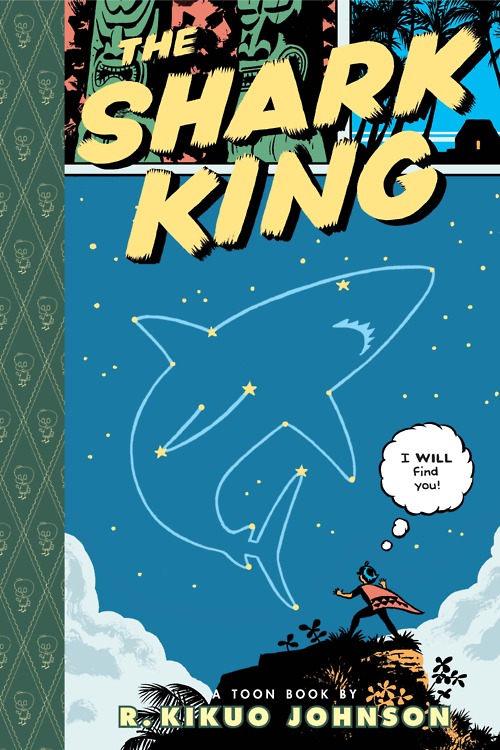 There are many reasons the better iterations of the Toon Books line are worth picking up for your kids: the publisher’s stable of excellent artists, frequently from the world of adult comics; its lovely color printing; its gentleness that doesn’t cross the line into syrup; its educational bent that rarely lectures. The Shark King fits right in with its better titles. Written and drawn by R. Kikuo Johnson, it retells a Hawaiian myth about a shape-shifting god who, much like Zeus from the Greek myths, fathers a child with a human woman. Not a ton happens in its story, but its pages are beautiful, full of action and vibrant color, and it doesn’t talk down to its audience (although it does minimize the violent elements of the original, understandably). It also doesn’t romanticize its setting, which is gorgeous and matter-of-fact at the same time, and Johnson clearly has a gift for depicting movement without minimizing setting. (HB) 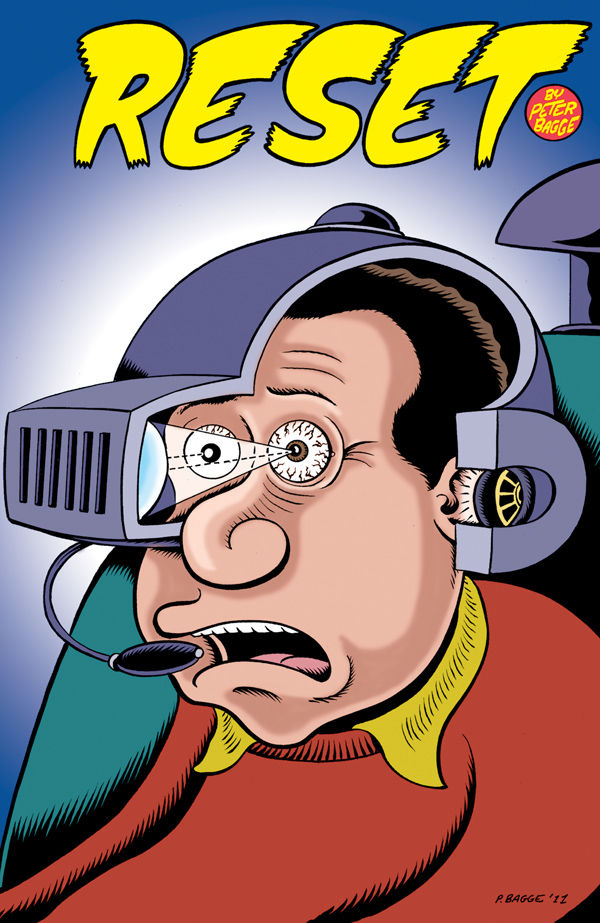 Peter Bagge’s latest ode to miserable normalcy starts when ex-celebrity comedian Guy Krause attends a court-ordered D.U.I. class after an off-screen road rage scuffle. He spends the next few pages muttering through instructional videos and mocking a drunk driving victim who cries over his family’s death. Anyone who’s ever tripped across Neat Stuff or Hate will automatically realize that this buzz kill introduction reeks of the regret and cynicism synonymous with its indie god author. What other writer would have the balls to start a famous comedians’ tale at its least funny and glamorous? Desperation is the point, though. Protagonist Guy Krause’s trajectory goes from self-pity to sci-fi when a research contractor offers him the opportunity to be a test pilot in a new “game” that allows the user to relive his or her memories through a virtual reality visor. Krause considers this bizarre alternative only because his cash supply and career options have imploded. The title comes from a feature on the mechanism that allows the gamer to abort their real-time journey through the past to return to a static start point. Which is coincidentally how much of this issue felt: static and anchored. Bagge is using the virtual world as a way for his schlubby everyman to play archaeologist on his own psyche, but all he offers for now is bland pretext. It’ll be interesting to see whether the story takes on a Christmas Carol optimism or forces its test subject further down the ladder of existentialist humiliation. As of now it’s hard to tell as the story stretches its exposition past its snapping point, only showing a brief flashback before Krause stops the process to shred more Archie Bunker gruff. At least there’s still hope this narrative will open up its crowded panels and stagnant pace to deliver the social barbs its creator is probably hiding under his next three issues. (SE)

the pterodactyl hunters in the gilded city