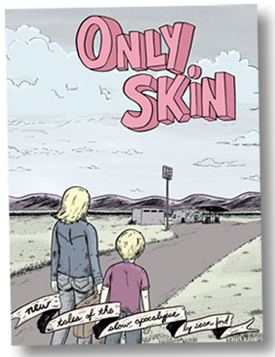 Only Skin
by Sean Ford
Secret Acres, 2012
Rating: 8.2
Secret Acres doesn’t like to do anything easy, and Sean Ford’s Only Skin is a perfect fit for the publisher. The tale features two siblings attempting to deal with their father’s death and a series of mysterious attacks and disappearances in a small town surrounded by wilderness. The only thing about this narrative that’s black and white is the art. Everything else focuses on the oddness, liminality and flaws in jumping to conclusions. Rather than favoring vigilante action, Only Skin wants you to hold back and think before rushing off into danger, especially as there might not be an answer to your question. What’s more frightening: the unknown in the woods or the unknown in your neighbors? Ford doesn’t come down on one side or the other, but beautifully teases out the horror in his premise. The presence of a ghost who resembles the iconic sheet with eyes and a mouth is a particularly interesting choice, seemingly harmless and all the more frightening for it. The ending leaves one unsettled in a way that’s rare in any medium and calls to mind Werner Herzog’s gift for evoking the uncanny in a truly Freudian sense. (HB) 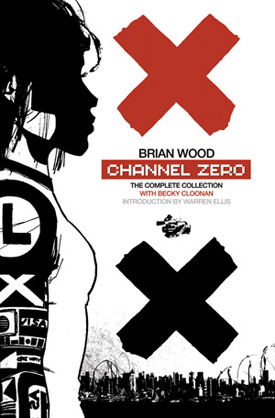 Channel Zero: The Complete Collection
by Brian Wood
Dark Horse, 2012
Rating: 5.8
As much as some people want to make the case that the 1990s was not a terrible time for comics, it’s far too close in time to invite much nostalgia. Instead, upon seeing something like Brian Wood’s Channel Zero for the first time in 2012, I was inclined to react with irritation rather than warmth. That’s not to say Wood’s story, which focuses on free speech vigilantes and hackers warring with a censorship-based regime, doesn’t have compelling energy. Wood’s central image, freedom fighter Jennie 2.5, is covered in vivid tattoos from head to foot and remains equally interesting and understandable as an inspiration. The problem with this book asks what this expanded edition, with many early drafts and Wood’s explanation of them, delivers: its author didn’t have so much a script as an idea. And it shows. Characters receive full-page introductions then do nothing, setting the stage for dramatic action that rarely arrives. Instead, there’s a lot of talking and specifically, sloganeering, but not much in the way of doing. Do you really miss 1997, with its self-important anti-advertising guerrilla windbags? You have to be caught up in the moment for something like Channel Zero to work, and we no longer are. (HB) 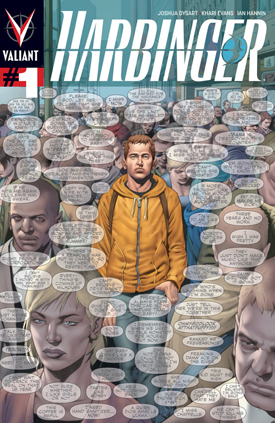 Harbinger #1
by Joshua Dysart and Khari Evans
Valiant, 2012
Rating: 7.2
The Avengers may have taken the populist nomination as best comic book movie in cinema history, but I would be lying if I said I didn’t enjoy its subdued predecessor Chronicle more. It’s not that there’s anything wrong with Whedon’s Wagnerian opus of billowing capes and trans-dimensional warfare. It’s just that the fantastic is realized much more poignantly when set against the mundane. This wasn’t quite as evident in Avenger’s two plus hours of floating cities, Norse Serpents and reality-warping cubes. But that’s just me. Conversely, the not-so-super focus of Chronicle shares more than a few plot points with the early nineties series Harbinger, notably clueless kids reading minds and doing stupid things that kids tend to do. The homage cycle completes this month as writer Joshua Dysart and artist Khari Evans relaunch the series. This new take features teenage telekinetic/telepath Peter Stancheck (in mandatory teenage telepath hoody regalia) who uses his powers to steal painkillers and sleep with childhood crushes, which in all honesty, is what most god-powered teenagers would do. The government chase scenes are infinitely less interesting, but Stancheck’s earnest desperation makes the mandatory conventions infinitely more engaging than if he was saving girls tied to railroads. The plot looks like it’s veering more into global theatrics, but the biggest thing Dysart could do is stick to the small human moments that make this introductory issue resonate. (SE) 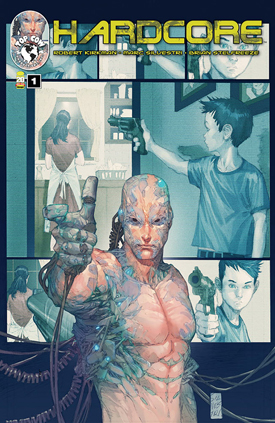 Hardcore #1
by Robert Kirkman, Marc Silvestri and Brian Stelfreeze
Image, 2012
Rating: 7.9
Walking Dead mastermind Robert Kirkman continues to produce movie-shaped comic books with this yarn about government agents who hijack other people’s consciousness to control marionette killers through a floating virtual reality womb. Part of Image’s (kind-of-ingenious) Pilot Season marketing device, voters will have to choose whether the tale is continued or bows to another competitor. For the record, this book reeks of fetal videogame/movie/novel/toy synergy. And I mean that as a glowing compliment. The story potential of mind-controlling spooks getting close to targets through their closest friends opens up all kinds of who’s-controlling-who’s-controlling-who paradoxes, like a blended Inception/ Total Recall/Being John Malkovich stew. The plot goes a step further when protagonist Drake becomes trapped in a host body and must return to his real body that’s been hijacked by ex-friend terrorists. More than slightly derivative and relentlessly fun, there’s no way you won’t want to see what happens next; nor will you begrudge the news that Joe Carnahan will probably direct it next year with Channing Tatum set to star. Either way, just let Kirkman stick his story into your pleasure receptors and enjoy the mainstream adrenalin that seeps in. Just don’t try to look it up on the Internet. (SE)