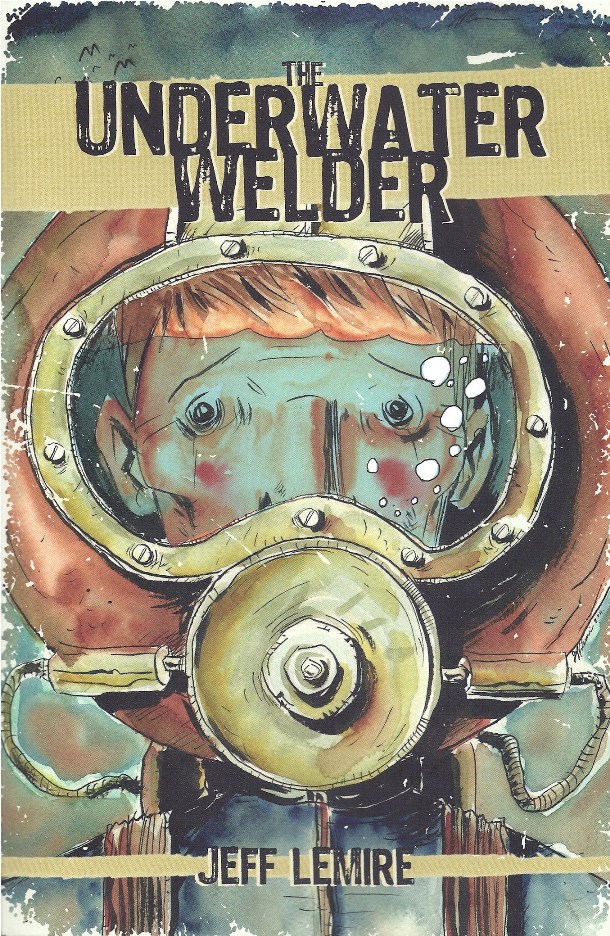 As a great Canadian once sang, it’s hard to be a dad. I guess that’s true. I’m not a dad. Many of my friends are, and I have a dad of my own, and they’ve definitely had some complaints. Jeff Lemire’s latest graphic novel The Underwater Welder isn’t really about undersea pipelines, time travel or absolute isolation, although all feature prominently in the plot. It’s really about one of the most profound pre-fatherhood existential freak-outs in recent fiction. Jack Joseph (the welder of the title, and just as Canadian as Lemire and the singer of “It’s Hard to Be a Dad”) is days away from the birth of his first child. Times are tight, though, so he heads off for another stint of welding beneath an oil rig far out at sea, during which a chance encounter with an old discarded gift from his childhood forces him to confront his relationship with his own father. Despite the debatable sci-fi trappings (does he really relive his past or is this more of a “life flashing before your eyes”, near-death experience type of deal?), The Underwater Welder is firmly rooted in realistic personal relationships, and isn’t that far off in sensibility from Lemire’s Essex County trilogy. Between Welder and his Vertigo series Sweet Tooth Lemire has mastered the art of the human story in a genre setting. Welder reaffirms that Lemire is one of the most versatile and vital creators in comics today. (GM) 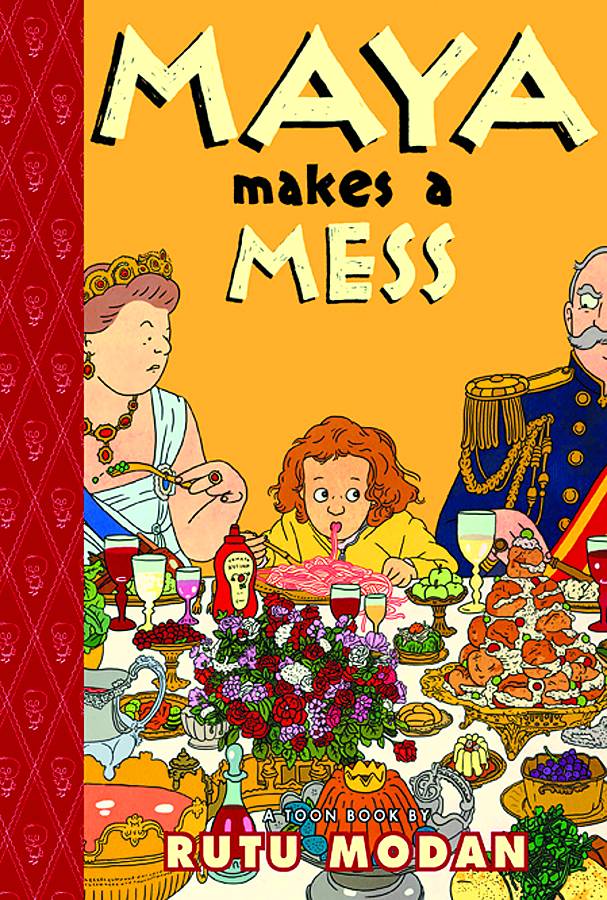 If you’re familiar with Rutu Modan’s grown-up material (Exit Wounds, her serial work in the New York Times), you might not expect her to produce a wonderful children’s book, but Maya Makes a Mess is exactly that, full of the vibrant color Modan does so well. Rather than imparting a lesson, the way many books aimed at kiddies do now and always have, it’s more concerned with a goofy story and the chance to draw people eating with their hands. If anything, it endorses a message of hedonism, within limits. Even audiences younger than Toon Book recommends will have fun looking at the panels, which have much going on, and details like the tangled noodle that runs along the bottom of all the pages supply visual variety without cluttering things up. It may give your child the idea that pasta with ketchup is an acceptable meal, but it can also introduce her to the idea of social registers. (HB) 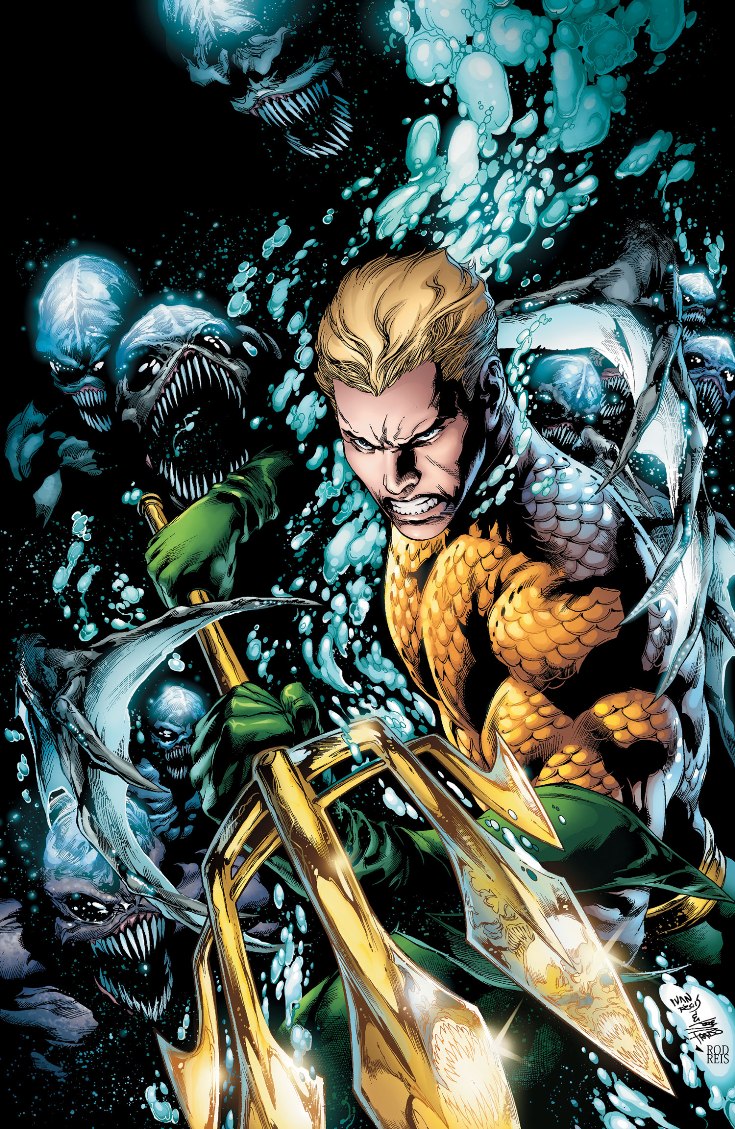 Geoff Johns approaches his relaunch of the ocean-faring Aquaman like a guilty child at a confessional. The alleged sins don’t belong to Johns, but to the Golden Age icon in his stewardship. Aquaman’s orange fish scale leotard and maritime powers (the guy talks to fish and waves around a trident) have relegated him to the antiquity stable where unupdatable properties cameo on Robot Chicken. Similar to the recent Muppet Movie, the new authors break down the fourth wall and allow the message board peanut gallery to make jabs at the character in his sequential art metaverse. Here’s the thing: Aquaman’s actually a badass and people who make fun of him straight up suck. And if you were picking up a number one issue with him in it, you probably already thought the same. Watching the modern Neptune flip over trucks with a golden pitchfork only to then get trolled by bloggers and cops in the same eight pages is like unwrapping a neon sign on Christmas that says “Santa Doesn’t Exist.” The clear intent is respectable: Aquaman is disproving his naysayers on his own territory. But it’s deflating and cynical to see such baseless fanboy commentary validated in the first place, especially when Johns does a fine job of showing the character’s exotic appeal in epic conflict. Much like the superlative work of Scott Snyder and Jeff Lemire in Swamp Thing and Animal Man, Johns elaborates on apocalyptic real-world headlines, ushering in a dying race of trench-dwelling cannibals forced to the surface because of dwindling resources. There are no heroes or villains, just bleak violence and hard choices with little piece of mind. It’s a harsh light projected over the Technicolor costumes and mythological backdrops, but adds a degree of relevancy that DC’s characters have long been criticized for lacking. (SE) 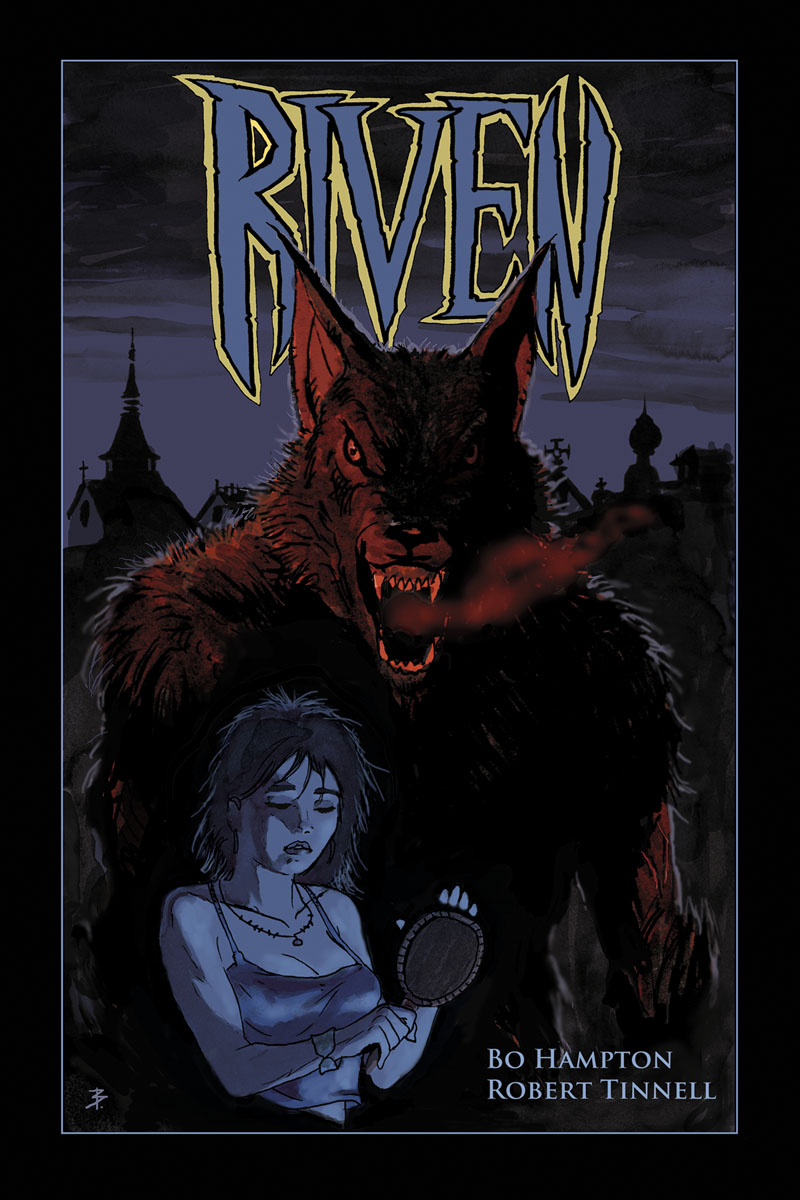 Unlike most comics credited to two people, it seems that Riven is at least ? by the former name, as Bo Hampton both co-wrote and drew the book. With elements drawn from Buffy the Vampire Slayer (smart female protagonist, feminist outlook, good twists) and Ginger Snaps (werewolfism as a metaphor for puberty), Riven has some problems, but its writing is strong enough for the most part to overcome them. Hampton’s art is much weaker than his storytelling skills (although it isn’t always), and he uses computer-aided blurring to a really irritating extent. In comics, where you aren’t limited by your budget, there’s no need to result to the obscurantist tricks of low-budget films, and the decision to do so is frustrating rather than adding to suspense or scares. That noted, the way the story is laid out is intelligent and well-paced for the most part. Things get a bit jumbled at the end, but the premise and the characters are intriguing enough to make a serial book out of them rather than leaving it as a standalone. (HB)