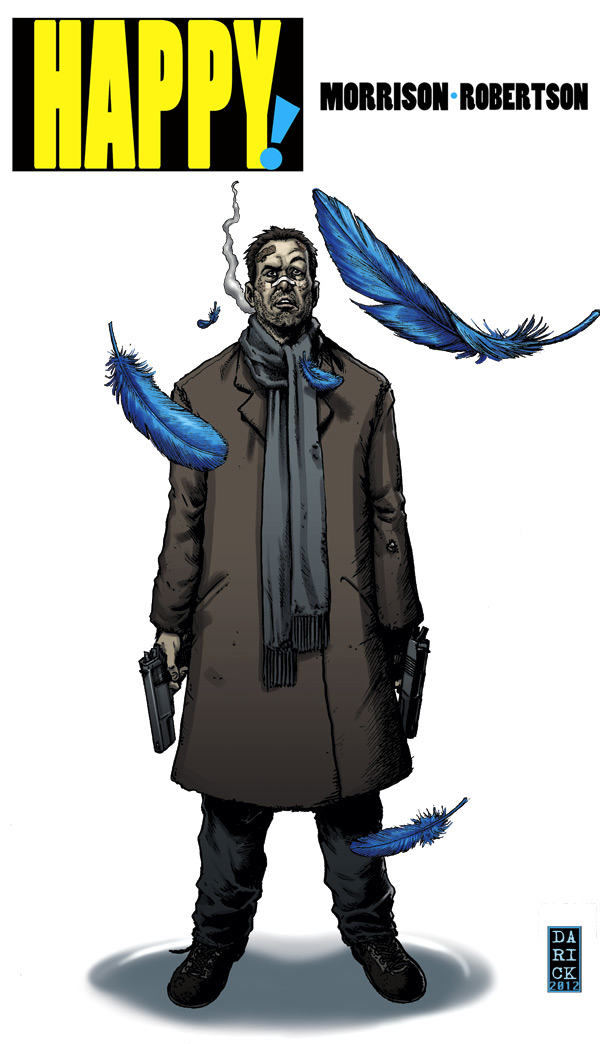 Happy may be the most straight-forward comic that Grant Morrison has ever written. That’s not saying much for a guy who generally dabbles in the fifth dimension with giant sci-fi ideas. Still, this miniseries debut hits a bizarre tone as a self-described homage to It’s a Wonderful Life for the gangster crowd. We’re introduced to Nick Sax, an ex-homicide detective turned slimy hit man who wanders into a job gone horribly wrong. The ensuing twists and turns show that Morrison is just as capable at choreographing hyper-violent action as brainy superhero operas. The first few pages alone capture our anti-hero slaughtering a hammer-wielding serial killer in a bug outfit to enlist a hooker in a game of cat and mouse with other contract killers. This issue packs a load of plot that will definitely leave you full, and that’s not even addressing the floating cartoon unicorn. Darick Robertson is the perfect partner in crime for this project. His detailed, scratchy pencils hit a new level of filthy that hasn’t been seen since his time on Transmetropolitan. Every panel looks infected by decay and corrosion, immaculately fitting the sociopathy of the characters. I’m already disappointed that Happy is only four issues. This is an exciting change of pace for Morrison, who seems to be having a hell of a time on this hallucinogenic black comedy for the holidays. It’s like Christmas came early. (SE) 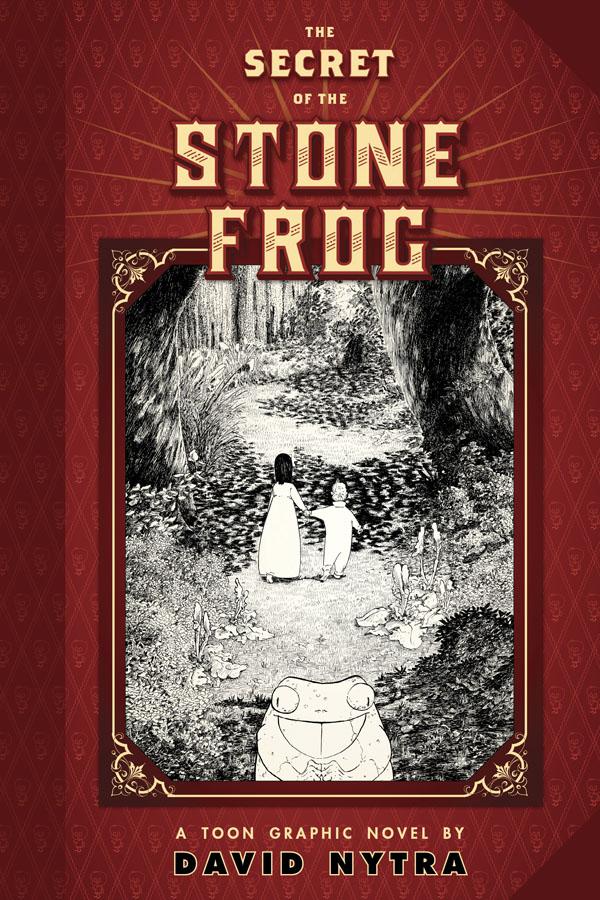 Up to this point, Toon Books has concentrated on volumes for younger readers, but The Secret of the Stone Frog is pitched at an older age group, able to follow more complex storylines and increasingly tolerant of ambiguity. Its deckled-edge pages hint at the old-fashioned yet weird story they contain, which evokes Hayao Miyazaki’s films as much as Winsor McCay’s work. As Leah and Alan, a young brother and sister, make their way through a dream world, trying to get back home, the creatures and landscapes they encounter aren’t beholden to waking logic, and Nytra’s delicate, complex images are perfectly suited to the subject matter. Much like a dream, however, the idea is better than the details, and the visuals are stronger than the writing. The presence of set type rather than hand-drawn letters is a distraction, and the ending feels tacked on, as though Nytra had hit his page count and decided it was time for his characters to wake up, rather than evolving organically. Still, there are enough striking compositions to make the book at least worth flipping through. (HB) 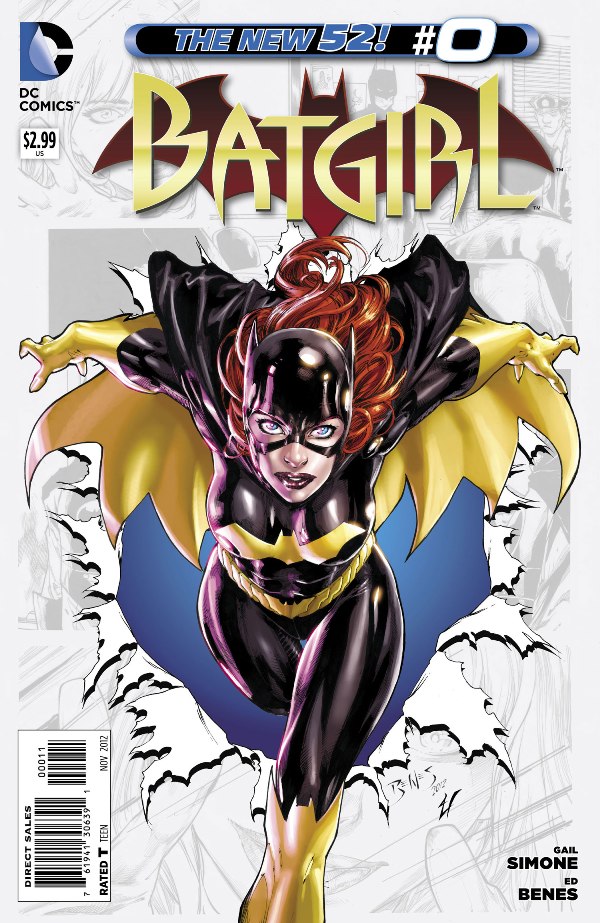 Demon Knights is one of the better DC comics that nobody is talking about. There are no Knights in this issue, though, which recounts the latest origin for the Demon Etrigan, who one of the few Jack Kirby characters put to more interesting use by subsequent creators. This backstory certainly isn’t as well-tread as other DC characters’, making this story potentially more useful to prospective readers than the latest Superman or Batman origin. Cornell’s humor harkens back to Alan Grant’s early 90s Demon series, which is actually one of two comics that got me regularly reading DC after a then-short lifetime as a Marvel Zombie. Sadly Chang’s flat art can’t capture the heavy metal majesty the subject matter warrants. #0 fails to introduce the team concept behind Demon Knights, but it’s an effective introduction to this one particular character.

Awkward art also undermines Gail Simone’s Batgirl #0, but with Ed Benes it’s at least an expected distraction. Equally unsurprising is Simone’s good ear for the character’s voice, with sly, smart, confident narration contrasting with the pre-superheroic Barbara Gordon’s goody-two-shoes exterior. I am not up on the status quo of this series, but a final page sting makes me assume DC’s relaunch hasn’t rewritten Gordon’s past as thoroughly as many expected. Simone might be a little too descriptive, with thought boxes in almost every panel, but this look at the new Batgirl’s first time in costume would be thoroughly competent if it had more consistent art. (GM) 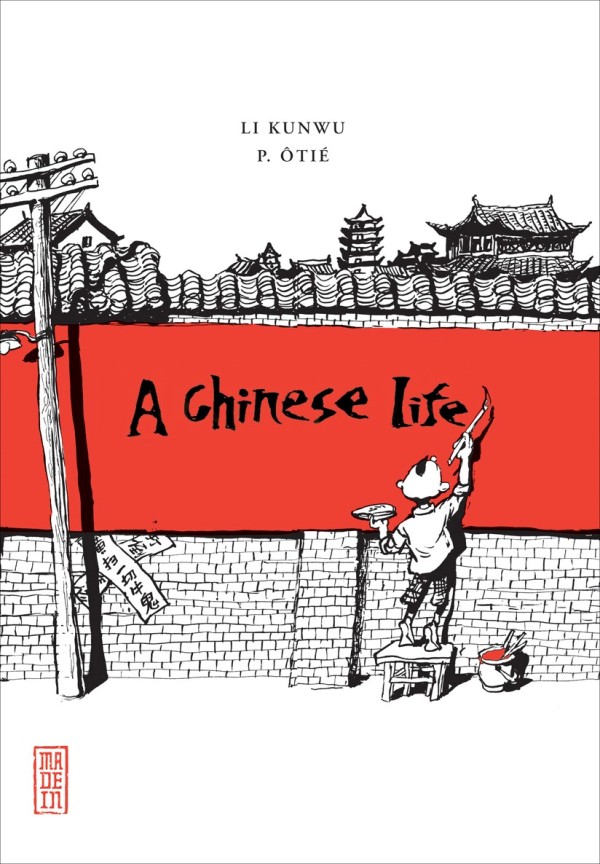 This brick of a book (704 pages) traces the history of modern China from the mid-20th century to the present-day through the life of one character, its autobiographer. With the help of Philippe Ôtié, a French diplomat who helped him shape his story, Kunwu starts with his parents, in the early years of Mao’s regime, and finishes just after the Beijing Olympics. That’s a lot to get into even a tome this hefty, and tons fall between the cracks. A passing knowledge of major characters and events in Chinese history is tremendously helpful, and the extensive footnotes often tend to focus on translations of unimportant background text rather than illuminating cultural context. Kunwu’s style—brushy, even sloppy, when it comes to depicting characters but better for landscapes and cityscapes—doesn’t assist the reader, either. Side stories can seem shoehorned in to illustrate particular developments, especially as Kunwu spent most of his life as a propaganda artist for the state and didn’t participate in political protest or the economic revolution. Most troubling of all is his persistent justification for problematic or horrific policies, as with the crackdown in Tiananmen Square in 1989 and the shrugging off of state-caused famine and the excesses of the Cultural Revolution. It’s not exactly a full-throated defense, but the man who ends the book hasn’t changed much from the little boy at its beginning who was devoted to Mao. (HB)

the secret of stone frog