Hameister put herself through over a year of uncomfortable experiences—like a professional cuddling session, an afternoon in a sensory depravation tank, 28 first dates—in an attempt to mitigate her anxiety via exposure therapy. She chronicles the ordeal in Okay Fine Whatever: The Year I Went from Being Afraid of Everything to Only Being Afraid of Most Things, a frank and humorous account of pushing back against her generalized anxiety disorder. 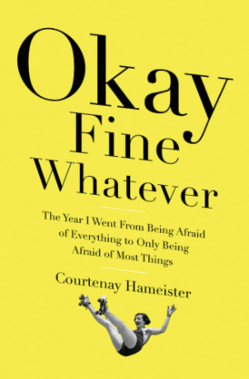 Reading Hameister, I realized that the worst days of my own generalized anxiety seem to have abated—the walls hardly ever loom, the chest rarely bangs. All that’s left are orange bottles cloudy with generic Xanax, testaments to a more nervous age. The generalized anxiety which accompanied my bipolar and borderline personality disorder, the kind which can inflict full-on panic attacks, has been tuned down to the hum of a lone bumblebee. The last such attack occurred in December 2017, but even then, sitting quasi-comatose in a bar disassociating, it struck me that this was manageable and that my friend—who knows me with the clarity, intimacy and precision of an fMRI—didn’t even realize I was currently gripped in panic.

But I’m still anxious about a good many things; I have been described, with varying levels of malice, as high strung and still operate in a world pocked with panic-inducing monsters. So, in the spirit of medieval demon catalogs or the Pokédex, here is a far-from-exhaustive list of Things I Still Get Anxious About:

1. Having too little work to do. This may sound strange to people with what I would consider real or important jobs—anything but mine—but the freelance life is one comprised mainly of waves, with feast or famine arriving on the tides. When the work dries up for too long, the fear it will never return mounts, and as life chips away at my checking account, an existential dread hovers over my interactions. The economic concerns are then coupled with an inability to separate my identity from my byline, and I turn toxic, a solider without orders.

2. My hair. Oh my god, will I obsess and worry about my hair. This has gotten better thanks to a new, less fickle styling—thank you, slicked back model mullet; your lack of architectural rigor has taken some sting out of the breeze—but a grocery run sans comb is still insurmountable, as ridiculous an idea as passing by a perfect car window and not checking my reflection.

3. Food. This is a tough one. On the one hand, it ties into work and finance, as it is a large and regular expense from which one will never escape and might as well be a guillotine blade. On the other, it taps into a constant fear, worse now that I’m 30, that food will take from a body I’ve spent decades carefully building.

4. Noticing that I am running out of weed. This is self-explanatory.

5. The idea that people are talking about me.

6. The idea that people are not talking about me. This is infinitely worse.

7. When I cannot find someone to hang out with that evening. I do not enjoy being alone very often, most likely because anxiety stalks and seems to pick out the stragglers.

8. Sex and relationships. Or, more specifically, their complete and total lack. A poor first date becomes a referendum on my attractiveness and desirability as a person, for surely, if no one wants me, then I am worthless. Thankfully, my ego eventually kicks back in, and the two balance each other precariously.

9. A career-ending error. This is both reasonable and terrifying. I fear making a mistake in the course of my reporting, the kind which has legal or ethical or moral or social repercussions. I will agonize for days after a big piece is published, forcing myself to check source emails, always expecting the next one to contain the mistake that ends my career.

Seeing a non-exhaustive cataloguing of my anxieties is equal parts frightful and freeing. It’s in that delicate balance between horror and personal growth that Hameister lives, and it’s a space—especially now, in an anxious age—in which we should all spend some time.

B. David Zarley is a freelance journalist, essayist and book/art critic based in Chicago. A former book critic for The Myrtle Beach Sun News, he is a contributing reporter to A Beautiful Perspective and has been seen in The Atlantic, Hazlitt, Jezebel, Chicago, Sports Illustrated, VICE Sports, Creators, Sports on Earth and New American Paintings, among numerous other publications. You can find him on Twitter or at his website.