Growing up as the child of famous parents doesn’t always prove the privileged joyride it might seem, as stacks of tell-all Hollywood memoirs reveal. It’s much the same for children of exceptionally gifted parents, even those who inherit their parents’ gifts, as Ethan Canin described with remarkable insight and acuity in A Doubters’ Almanac.

A Doubters’ Almanac recounts the rise and fall of a peerless talent and how the resulting wreckage tears apart a family. Daryl Gregory’s new novel Spoonbenders instead concerns itself almost exclusively with the fallout of their former fame. If that makes Spoonbenders sound like it leaves all the fun out of out-of-body experiences, ESP and predicting the future…well, much of the book does remain soberingly earth-bound, even during scenes of soaring astral projection. It’s only in the book’s final chapters, when old wreckage gives way to new carnage, that Spoonbenders takes flight as exhilarating, high-action drama.

Spoonbenders begins in the summer of 1995, more than 20 years after the Amazing Telemachus Family, an ascendant troupe of genuinely gifted psychics—mother, daughter and two sons—crashed and burned before a national TV audience on The Mike Douglas Show. “We could have been kings,” laments older son Frankie, one-time aspiring telekinesis prodigy, now a telephone technician and failed entrepreneur dangerously in debt to local gangsters. 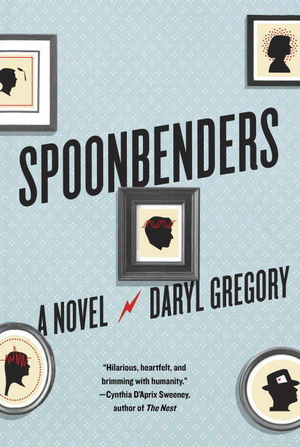 Frankie and Irene’s father, Teddy, an old-school con artist with murky old-time mob entanglements, has been a widower for 20 years. Yet he continues to receive letters from his wife, Maureen, once the world’s greatest psychic, who died not long after the Mike Douglas Show debacle.

Spoonbenders’ most intriguing and confounding character is younger Telemachus son Buddy, half Owen Meany, half Benjy Compson, who shuffles mutely around his father’s house pursuing a random assortment of half-finished electrical and carpentry projects. Once gifted with vivid and detailed “memories” of future events, Buddy seems most damaged of all by his mother’s death.

Daryl Gregory takes a daring gamble in Spoonbenders by presenting the Amazing Telemachus Family so deeply in decline, denying readers a ringside seat for their early success. Though focused on a family with spectacular abilities, Spoonbenders proves insistently short on spectacle, at least until its last 50 pages or so, when the novel explodes with pyrotechnic action and violence. With its proximity to gangsters and government agents throughout, the novel often seems poised to move in that direction. But the book mainly documents how suppressed psychic talents feel more like curses than gifts. Only Teddy, an accomplished card shark and the one surviving Telemachus who never possessed any innate extraordinary abilities, seems to retain any vestigial Flying Wallendas huckster flair.

In Spoonbenders, Gregory delivers a book about powerful psychic travelers that continually refuses to transport its characters or its readers to anyplace magical in favor of end-of-century malaise. Even though the novel is set 20 years in the past, Gregory presents the mid-1990s as a historical moment bereft of nostalgia or romance. As Frankie muses in a particularly desperate moment, “All his life, Teddy had told stories about gangsters he’d known, mooks with knuckledusters, gun-carrying henchmen, molls with switchblades tucked into their garters. Movie characters. Teddy was the hero of these stories, a trickster with fast hands and a faster mouth. Frankie had longed to be that guy, the smooth-talking confidence man, but by the time he grew up, they weren’t making movies like that anymore. All that remained were second-hand tales, you-shoulda-seen-it stories, and barely edited highlight reels.”

Spoonbenders has already been touted as a novel that will do for psychics and telekinetics what Michael Chabon’s The Amazing Adventures of Kavalier & Clay did for superheroes—as if Kavalier and Clay were primarily superheroes, rather than the little-known guys who imagined them. Gregory achieves something arguably more challenging: an engaging and affecting rise and fall novel in which the rise and fall are foregone conclusions, neither one fully or fondly remembered.

Yet, by the end, Spoonbenders becomes a strangely wild ride. For a book that insists so consistently on differentiating true talent from clever tricks, Spoonbenders reveals an author gifted with more than his share of both.

Steve Nathans-Kelly is a writer and editor based in Ithaca, New York.