How do you write about loneliness? Despite being a universal human experience, “being lonely” is a state most people find nearly impossible to comprehend when they are out of it and, in many cases, difficult to characterize while in it. To compound this challenge, loneliness is seen as shameful—an embarrassing failure of an individual to connect with society. But in her latest book, The Lonely City, author Olivia Laing cuts through the mystery to expose the heart of what it means to be lonely and isolated in a mass of humanity.

Between 2011 and 2013, Laing split her time between England and New York. Writing her second book (The Trip to Echo Spring) and moving regularly between sublets, she soon found herself feeling, well, lonely. And rather than turn away from the experience, Laing saw an opportunity to explore a state about which little is known.

“I got hooked on the idea that there was more to loneliness than meets the eye,” Laing says.

What would become The Lonely City began as an essay, and Laing immediately saw the potential for a longer meditation on the subject.

“I was living inside it and fairly unhappy,” she says. “But at the same time, I was fascinated by it and had an intense desire to research it and make sense of it.”

But how do you make sense of an emotional state that, as Laing explains in her book, hasn’t been comprehensively researched? Our understanding of loneliness is built primarily on studies by psychiatrists like Frieda Fromm-Reichmann, whose posthumously published 1957 essay “On Loneliness” explores the difficulty in overcoming our instinct to turn away from loneliness. And we do know some things about what loneliness does to the brain, particularly the hyper vigilance induced by isolation, which can obscure and distort social interactions in a way that only furthers the very sense of alienation that feeds loneliness. 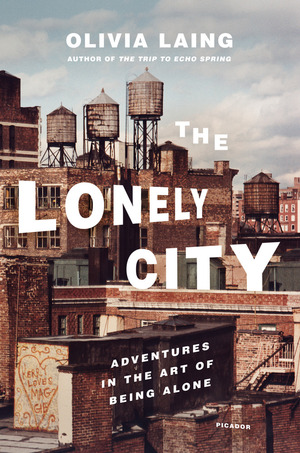 Laing tackles a unique angle in The Lonely City, turning to art and the artists who lived with and manifested loneliness through their work. She also weaves in her own story, shared in vignettes that juxtapose her research and isolation. And although she was moving back and forth between the UK and the U.S. while writing, Laing opts to keep the narrative firmly on U.S. soil, only leaving New York behind for a chapter on Chicago artist Henry Darger.

“There was a particular character to loneliness in New York,” Laing says of the decision to focus on the Big Apple. “I was living a particular kind of life that I think is increasingly common—of subletting and drifting and moving from place to place fairly rapidly. The loneliness back in England, where I was more established and more permanent, had a different quality to it. The one I was interested in was the ultra urban, alienated version.”

The artists Laing focused on were enmeshed in the city yet deeply isolated. Edward Hopper’s outsider gaze captured the sense of distance possible within urban environments. Andy Warhol’s hyper social behavior celebrated the strange while removing himself from others. David Wojnarowicz, on whom Laing lingers longer than others, found a community that embraced him, and yet always felt alienated. Josh Harris, bringing loneliness into the age of the Internet, foresaw the complex role the web would play in how we interact. Henry Darger is the exception, living and working in isolation his entire life; his works were only discovered after his death.

Although many of the artists Laing included were either of long-term interest, like Darger; or close to her heart while researching, like Wojnarowicz, Warhol’s relevance to loneliness wasn’t immediately apparent.

“I had no interest in the world of the Factory,” Laing says. “I had seen everything and it was not my scene at all. Then when I started reading [a novelized transcription of recordings Warhol did with Factory regular Ondine], it all started becoming much stranger to me—much more human and personality driven. And much more gritty and troubling. It seems very vacuous, but the reality seems to be that there were people with all kinds of vulnerabilities and all kinds of vast talents, and people who were very socially excluded in others ways. Lots of narcissists and lots of performers, and issues of intimacy, fearfulness, desire for attention and craving for love.”

Given the tight quarters of New York City, exclusion rather than literal isolation is the running theme of the book. Some, like Warhol with his cameras and tape recorders, kept social distance by choice. But others, like Wojnarowicz, struggled with being an outsider. From an abusive childhood to a celebrated art career to AIDS activism in the wake of his own diagnosis, Wojnarowicz’s life was remarkable. But as Laing explores, he always felt outside the norm.

“He was such a deeply loved man,” Laing says. “He was so socially connected within the New York art world; he collaborated throughout his career. At the same time, he has this very strong sense that he talks about a lot in his work, even before being diagnosed with AIDS, of feeling alienated and separate. It seems to me that comes from a) having an abusive childhood, and b) the experiences on the street that he felt very ashamed of as he was going back to a more conventional society and c) the experience of growing up queer in America in a homophobic society, where what you desire to do was considered horrific, repulsive.”

Wojnarowicz’s story cuts to the core message of Laing’s book: loneliness is as much of an individually occupied space as the byproduct of society’s desire to exclude the misunderstood other. As a gay man immersed in the art scene at the height of the AIDS crisis, Wojnarowicz saw many of his closest friends and collaborators forced out of the system by individuals who feared more than they wanted to understand and to help.

“If there’s a message to the book, it’s the political component of loneliness,” Laing says. “We tend to think people get lonely for personal reasons, and it’s the individual person’s responsibility. But I think it’s social forces that cause people to become excluded…It’s much more to do with the external world and how it treats people.”

Her book primarily focuses on male artists, but Laing made it a point to include women in each chapter. From Greta Garbo to Valerie Solanas, she looks at their lives as individuals and in the context of the artists she’s profiling. Jo Hopper (Edward Hopper’s wife), for example, is both her husband’s ally and a rival of sorts, ignored by the same establishment that embraced her husband.

Laing highlights the interplay between loneliness and patriarchy, showcasing the women who would otherwise be footnotes in the stories of these men. In so doing, loneliness takes on shades of confinement rather than distance, an isolation bred of oppression.

“When I’m talking about Hopper or Solanas, or Garbo or the Hitchcock women, that is very much my way of thinking through what the relationship is between gender and loneliness over the last 100 years,” Laing says. “Women like Jo Hopper and Valerie Solanas were incredibly talented and had no outlet. There was no audience who could understand or connect with their work, and that is incredibly lonely and isolating.”

The Lonely City certainly isn’t lighthearted fare to read and then move on without dwelling on its ramifications. The weight of loneliness and isolation lingers, but there’s an undeniable sense of, if not beauty, then significance in bearing witness to the profiled lives. Confronting something that so often lives in shadows is at once cathartic and moving. Laing hopes that, in the end, the book leaves readers with the belief that loneliness is not shameful but an opportunity.

“We forget that these darker states are part of what it means to be alive,” Laing says. “No matter how socially buoyant and socially successful you are, at some point you are going to experience loneliness. And I really feel the most painful component of loneliness is the shame, and it’s the most unnecessary component. It doesn’t have to be there, and once [shame] is taken away, loneliness becomes more interesting and a state of possibility.”