In our increasingly globalized world, some places still appear cemented in a time gone by. Haiti is one such place that captures the imagination, but there’s more depth to the country than you’d find on the surface. In his latest novel, National Book Award Finalist Mischa Berlinski digs deep into the local and national politics on which Haiti’s fortunes hinge—and the rapidness with which it all can be undone.

Narrated by an unnamed American writer living in Haiti with his diplomat wife, Peacekeeping is about, well, a road. Terry White is a former Florida police officer and failed politician who is training with the UN and supporting police forces in the isolated city of Jeremie. Johel Celestin is a judge with aspirations to make Jeremie a better place. So the two come up with a plan: Celestin will run against powerful local Senator Maxim Bayard, championing a platform focused on building a road that would connect Jeremie to Haiti’s capital Port-au-Prince. 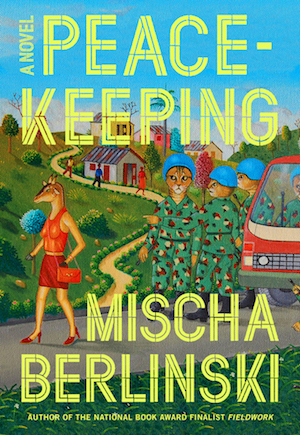 In reality, building a road means more than construction. The election system is corrupt; ballot boxes and candidate lists are manipulated by higher officials, while locals are happy to accept bribes on behalf of campaigns in exchange for possible loyalty on election day. Bayard has a reputation for ruthlessness when it comes to opponents, and he’s had a whole career to cultivate influential alliances. Getting into the election will mean dismantling a system designed to keep people like Celestin out.

Then there’s the question of the road itself. As Terry and Celestin explain at length, the road would mean economic growth for the area, which in turn would bring stability and relief from poverty. It would undermine the network of patronage and reliance Bayard has developed among the population, with individuals coming to him to for help in exchange for cash and favors. By building a road, Terry and Celestin would rewrite the future of Jeremie.

The narrator’s role is unique. He’s not quite part of the story, but he inexplicably wins the confidence he needs to be part of the inner circle. He hangs around campaign headquarters, has lunch with Kay White and is kept in the loop. His wife, however, never gets more than a passing mention, her stance and the implications of her diplomatic position as embassies become involved in the escalating election never explored. The narrator is simply an observer passing on what he’s witnessed.

His distance makes for an interesting perspective. He’s alert to what’s going on around him, a naturally observant man who sticks around in crowds. As such, he witnesses the tragedies inherent in poverty—child-sized coffins, for example—but he’s also a member of a privileged elite in Jeremie. He’s one of many international players inhabiting the center strata of the hierarchy, wealthy enough to be comfortable but estranged from the actual levers of power that govern the nation.

Peacekeeping reaches almost 400 pages, but Berlinski whips up tension and excitement as the campaign unfolds. Yet it takes time for the story to set up its principal parts and players, including Celestin’s wife Nadia and Terry’s wife Kay. The languid beginning masks the high-stakes plot, similarly to how Haiti’s seemingly monotonous existence belies the shifting international interests and money-funneling below the surface.

The novel proves to be fascinating, but it’s the ending that clinches it as a remarkable story. The entire narrative comes together in one moment of sudden, unexpected shock that forever changes the lives of all involved in the story, including the future of Haiti. With Peacekeeping, Berlinski brings a quiet but vital nation to vivid, horrific, incredible life.