The System rules the galaxy, ensuring peace and security everywhere from the prosperous planet of Earth to the distant outer moons beyond the asteroid belt. Or so the System would have you believe. Constant surveillance is wearing on the people, and terrorists, led by the enigmatic Mallt-y-Nos, are violently fighting for freedom.

In the midst of this chaos falls Althea, a computer scientist serving aboard an experimental military spacecraft called the Ananke. Althea wants nothing more than to continue her work in peace, but when two terrorists sneak onto the ship and infect it’s programming, a dangerous game of deception and terror ensues.

Lightless, the thrilling debut novel in a new trilogy, hails from the mind of physics major-turned-author C.A. Higgins. Paste caught up with Higgins to discuss her inspiration for the novel, how the laws of thermodynamics match the story and what to expect next in the series.

Paste: What sparked your imagination to write Lightless?

C.A. Higgins: There were these two physics classes, and in one of them I was doing a math problem…and it wasn’t going well. I was throwing equations at it—the way you do when you’ve given up on trying to solve it logically. Something about that—throwing equations, trying to keep it going—made me think out of nowhere about a man in a room telling stories like Scheherazade. 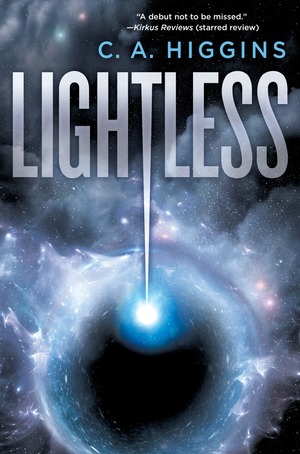 In a later class, we were talking about equations of state and particles in a box and how they evolve according to the laws of thermodynamics. If you shrink the box, they get nervous and run around. If you turn up the heat, they get hot and move around. If you turn down the heat, they get cold and huddle together. So I thought of this box and saw an isolated group of people in an environment that is changing in unexpected ways. They’re interacting with each other, and they’re interacting with the environment. And every time something happens, their situation gets more chaotic.

Paste: Lightless is the first book in a trilogy. When you began writing it, did you know you wanted it to a series?

C.A. Higgins: It started as one book, actually. As I was writing it, there was so much more that was going on in the backstory of the characters. There was a lot of story that wouldn’t fit in the book, because I wanted to keep it neat and focused. So I realized, after a certain point, that even though it had started as a standalone, it should have one or two other books to follow it.

Paste: How did your background as a physics major influence the world of the novel?

Higgins: There are certain science fiction tropes that are physically weird, like artificial gravity. So I wanted there to be a base of real physics for certain elements. All of the ships have a reason for the gravity on them; either they rotate or they have a massive core like the Ananke. But at the same time, I didn’t want it to get to the point where the science obscured the characters. You don’t need to know how all of the ships work, because beyond a certain point, that’s not important for the story. If I told you, it might be interesting, but it would also be a lot of information. So I wanted a scientific basis for most things that sounded plausible, without drowning the reader in how it works.

Paste: Why do you list a different law of thermodynamics before each section of the book?

Higgins: Part of it was because I got the idea [for the story] in a thermodynamics class, and part of it was that the laws of thermodynamics are dramatically satisfying. If you interpret them more dramatically than perhaps you should—as, of course, I did—then chaos always increases and the universe is going to end. So how the characters and their situation evolved corresponded to the laws of thermodynamics. They start out in a position of equilibrium, and then things get more chaotic and reach maximum chaos. So the laws divide up the “acts” of the book.

Higgins: I wouldn’t want to live there. [Laughs] It’s a miserable place, and knowing what I do about what happens, I would probably want to live on Venus. Earth is the upper-class place where everyone wants to live, and anything inside the asteroid belt is decent. After you go past the asteroid belt, it’s kind of awful.

As for a job, I’d like to be the king of the System, but the System doesn’t have a king.

Paste: The System is always watching and limiting freedom in the name of “protecting” people. Can you elaborate on how it works?

Higgins: I wanted it to be a faceless organization. I didn’t want you to be able to kill the leader and then end the oppression. I wanted it to be a force that has no individual associated with it. This is in contrast to the revolutionaries—or the terrorists, depending on which side you fall—who have a clear leader: the Mallt-y-Nos. I see the System as a government that has existed so long that it has become increasingly warped and corrupted. You can see how it might have been good once, to keep everything secure and to manage distant planets and billions of people, but over time it has decayed.

Paste: Can you give us any details about the second book in the trilogy?

Higgins: The second book is written, and I’m writing the third one now. In the second book, you’ll find out a lot more about the Mallt-y-Nos. There’s also a new character named Arawn, like the Welsh king of the underworld, which tells you a little about him. He is an interesting force in the revolution.

If you live in New York City, you can meet C.A. Higgins during Mad. Sq. Reads on Thursday (10/1/15)! Mad. Sq. Reads is the free literary program of the Madison Square Park Conservancy, and Higgins is this week’s guest author.