In the crowded crime fiction field, with more and more literary giants elbowing their way in, the crush makes evaluating new books a tougher job.

Overall, the field has come a long way from the pulp novels and cheap dime thrillers of yesteryear, the quality level rising consistently over time. That rise in quality has generated more crime fiction worth reading. The forbidding shark-filled moat that traditionally separated high art and popular art has now become an easily forded, meandering stream that occasionally slows to a mere trickle. 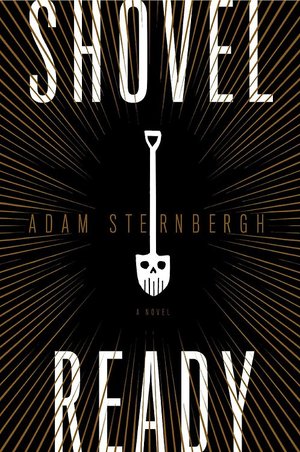 Adam Sternbergh’s debut novel Shovel Ready attempts to blend three genres: Crime of the caper variety, speculative science fiction and the near-future dystopian world we all seem to fear these days. First, the potential nuclear holocaust scared us to death; then we had a raft of asteroid-impact or runaway incurable disease books. Today, it’s either climate change or terrorism that seems to cause our nightmares. McCarthy’s The Road sets a high bar for climate dystopia, so Sternbergh takes a different tack: A dirty bomb has made most of Manhattan uninhabitable. We all know that down these mean, radioactive streets a man must go. In this case, it’s a nasty character named Spademan, a vicious ex-trash collector knife murderer-for-hire with, uh, a heart of gold.

Yes, lots of crime writers have gotten bored with the standard-issue evil villain. Most of us understand that the core of a crime novel circles around the villain, the antagonist, the bad guy. So why not make him, or increasingly her, the protagonist, too? That realization occurred to some of the best long ago—Lawrence Block, Donald Westlake and his alter-ego Richard Stark, the incomparable Jon A. Jackson, not to mention Poe and Dostoevsky, etc. Still, it takes a truly talented hard-boiled novelist to make you want to root for Snidely Whiplash. Antagonist-centered books require a careful balance between believability and that small measure of likeability we all need to keep us caring … and reading.

In this case, our anti-hero Spademan, even with a nasty mega-rich TV evangelist as a client, doesn’t quite make the villainous, hired-killer grade. (Crime fiction does not allow nice TV evangelists.) Spademan tells the evangelist’s factotum that sure, he’ll be happy to kill the guy’s daughter for a price—but meets her, changes his mind and winds up protecting her.

We get multiple descriptions of Spademan’s grisly knifings, accomplished of course with no pangs of conscience whatsoever. Then, suddenly, our anti-hero develops a soft spot for Persephone, the pregnant teenager he’s promised to dispatch. All this occurs against the backdrop of a New York where the “limnosphere,” a jacked-in, fantasy-granting virtual reality, makes zombies out of the rich. It’s pretty much a straight lift from the cyberpunk world of William Gibson.

Despite the cartoonish characterization and derivative genre-melding, Sternbergh develops a steady rhythm in his writing, carrying the reader along with staccato dialogue and plotting. The author’s day job—culture editor of the New York Times Magazine—guarantees a slightly elevated level of interest among literati. For a debut novel, Sternbergh has already done well, with Warner Bros. picking up the film rights pre-publication and more Spademan books on the way. Perhaps this sort of deranged superhero-without-a-costume approach has a future. 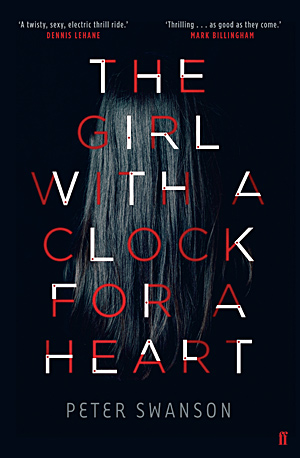 The Girl with a Clock for a Heart
Author: Peter Swanson
Rating: 7.3

Peter Swanson came to publishing the new-fashioned way—on the Web. The Girl with a Clock for a Heart initially saw daylight as a novella in the e-zine Mysterical-E. In the virtual equivalent of a slushpile excavation or a Schwab’s drugstore discovery, Swanson then got a call from an agent who urged him to flesh out the story into a novel. He did. The resulting book, with its original premise, clean execution and just-flawed-enough characters, takes a satisfying journey and asks a scary question: What if the love of your young life shows up 20 years later, but she’s a murderer?

Liana, the femme fatale antagonist in Swanson’s book, has some of the character depth and complexity Spademan lacks. She’s compelling, believable, alluring and just troubled enough so that the smitten protagonist wants her back in his life immediately. Naturally, he gets much more than he expects in return—Liana leads our boy George into a web of deceit, nasty short guys with guns and the real prospect of ending his entirely too-settled life.

Ever daydream about the prospect of re-connecting with a particularly exciting former flame? This book plays with that daydream and turns it into a nightmare. It transforms the ardent, throw-caution-to-the-winds fantasy about returning to the lost, freewheeling, intense days of our youth into a fatal, dangerous and entirely unsettling set of serious adult consequences.

The Girl with a Clock for a Heart has that telling undercurrent a crime novel needs to transcend its pulp roots—an underlying theme. It has depth. In other words, it’s about something important, something worth considering. It asks readers to contemplate their past and their present, then to decide which one they’d rather inhabit. 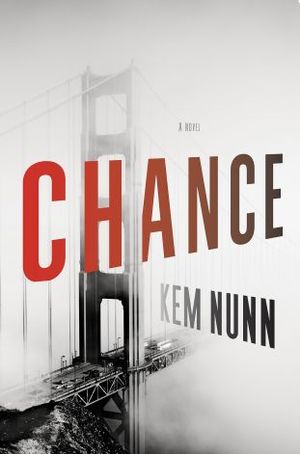 Chance, the new novel by Southern California noir writer Kem Nunn, takes the crime novel formula and bends it into an almost unrecognizable shape. Nunn, who won the LA Times Book Prize for his last novel Tijuana Straits, can really write—his previous five novels show off stellar abilities. He started out writing about the dark sharks lurking below the surface of California’s surfing culture with his first novel Tapping the Source and his even better fourth book The Dogs of Winter. A sunny-with-a-chance-of-earthquakes sensibility settled into his work from then on. Nunn explores the psychological depths of his characters the same way Ross MacDonald and Raymond Chandler did, with an inky archeological look at the Jungian shadows we all cast.

Nunn’s conflicted protagonist Dr. Eldon Chance works as a forensic neuropsychiatrist in San Francisco, making “the better part of his living explaining often complicated neurological conditions to juries or attorneys who would soon be standing in front of juries.” In the midst of a hostile and expensive divorce, with a philandering wife, an increasingly incommunicado teenage daughter and six-figure IRS problems, Chance encounters a patient whose multiple personality disorder makes her beauty even more intriguing. Like George in The Girl with a Clock for a Heart, Chance lets his libido lead the way.

So what makes the difference in this crime novel? What sets it apart from so many others?

As always, the best art evinces the writer’s depth of intent, the thematic insights into the moral dilemmas of life and the compelling unfolding of the tale itself. In Nunn’s superb work, you’ll find every one of those elements—but above all, his fine writing will stab you. Witness:

“…what set her apart from so many of the others, was that she had about her some aspect of the caged bird, of a life un-lived. And it was just that, he thought, the horror of the life un-lived, that had found him out, in the midst of his own decline, wherein each day seemed at risk of being even more dimly lit than the one before it.”

Nunn’s novels marry movement and action with reflection and intellectual power. Navigating his themes feels like Kurtz going upriver. Minor characters light up his chapters with the same complexity his major characters bring to the work. His settings throw a harsh, ionized West Coast light across your eyes. His fiction—all of it—has the unbearable intensity of a welder’s arc, illuminating the dark places and searing disparate metals together in the heat. His antagonists retain their humanity, and his protagonists put theirs in jeopardy.

Chance possesses the sweeping scope of great tragedy, along with a contemporary take on the ancient Greek sensibility of the fatal flaw that lodges between the animal and spiritual natures in every human being. As a literary critic, coming across a book like this reawakens a sense of what art can do. It creates hope for a future where high art and popular art, after one perilous, ill-considered but unforgettable night, make a beautiful baby.

David Langness contributes regularly to Paste. He lives in the Sierras of California.

the girl with a clock for a heart