Stephen J. Dubner may be the only person who gave up being in a rock band to write about economics. But when you’re a co-author of Freakonomics, rocking out and researching aren’t that different. Dubner, alongside Steven D. Levitt, has built a unique brand—now spanning the worlds of publishing, radio and film—based on the premise of exploring “the hidden side of everything.” Their new book, Think Like a Freak, expands upon that premise while also offering tips on how to become better explorers ourselves. It starts with recognizing the importance of stories, ideas and questions.

“What I think of as ‘freakonomics’ is mostly storytelling around an idea—not a theme but an idea,” Dubner says in a phone interview with Paste. “I like ideas much more than themes. Themes are boring. Themes are ‘wool is back’ but ideas are ‘Why is wool back?’”

Reading a new book by Dubner does for your brain what listening to a great album does for your ears: it makes you excited to be alive and gives you a new way to experience the world. And let’s not forget the guy was in a rock band that used to bump shoulders in the studio with R.E.M. (who, Dubner says, were “super, super, super nice and helpful”). The band was called The Right Profile, and Dubner wrote songs and sang alongside musician Jeffrey Dean Foster.

“His big influences were Hank Williams and early Bruce Springsteen,” Dubner says. “Mine were Otis Spann, an old blues piano player who had a record I learned to play piano off of as a kid, and The Rolling Stones, especially Exile on Main Street. Then we got into punkier stuff, because this was the early ‘80s. It was kind of a mangling of all that stuff.”

Even during his time as a musician, Dubner displayed signs of the popular economics author to come. “I was a math and science kid in school, but I ended up going the route of writing and music in college,” he says. “So I kind of atrophied with math and science stuff. But after I quit the band, got out of grad school and got my first job working in journalism and making very little money, I was trying to figure out how to live in New York. I was trying to figure out how to deal well with money.”

Dubner became fascinated with “the psychology of money” after being introduced to the behavioral economics research of Daniel Kahneman and Amos Tversky by his older brother, who also taught him the ropes of personal finance. But it was the researchers’ work about how people make decisions that inspired him to write a book of his own on the subject.

“I found it very interesting: the huge difference in people’s lives by making very basic decisions,” Dubner says. “Good decisions, bad decisions or being scared to make any decisions.”

Meanwhile, he was turning down an opportunity that would change his life. “I had this editor, Hugo Lindgren [formerly of The New York Times Magazine],” Dubner says, “and he asked me if I wanted to write a profile of this guy, Steve Levitt, who had just won some academic award. I knew Levitt’s work a little bit. I knew the abortion-crime paper (which later morphed into the introduction to Freakonomics), but it had nothing to do with money. So I turned down the assignment about two or three times.”

It was a trip to Chicago that eventually changed Dubner’s mind and started the partnership that has satiated the curiosity of countless readers and listeners.

“Finally, I was going to be in Chicago anyway, so I downloaded and read all of Levitt’s papers,” Dubner says. “They were mind-bogglingly interesting. I was both fascinated and a little jealous. He wrote about the kind of ideas and topics as an economist that I wanted to do or thought I did as a journalist. He was just great. They had nothing to do with money or the psychology of money I was working on. But I wrote about him and I ended up putting that book [about the psychology of money] in a drawer to write Freakonomics instead. And it’s been literally ten years or something since then.” 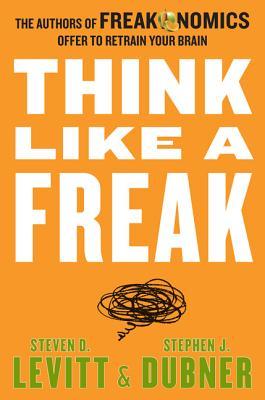 Flash forward to his new book with Levitt, Think Like a Freak, which champions returning to the bare bones of thinking itself, starting from scratch and learning how to make better decisions. It was in the process of writing the book that Dubner realized how the “weird” thinking made popular in Freakonomics and SuperFreakonomics isn’t that strange after all.

“Whenever there’re these massive topics that everyone is following and chasing, [Levitt and I] just kind of zag when people zig,” he says. “Our minds both gravitate toward similar, weird-ish ideas. But for [Think Like a Freak], when we started to think about it, we realized the way we approached problem solving wasn’t weird at all. The only weird part was why people don’t do it more.”

Dubner considers the book to be “a little bit more of a hybrid” of Levitt and himself. A good case in point is the final chapter: “The Upside of Quitting.”

“I think Levitt won’t mind me saying he has almost zero to do with the podcast,” Dubner says. “He does it as a favor to me, which I really appreciate. Here’s something cool, though. There’s one we made very early on called ‘The Upside of Quitting.’ I just loved the idea and he loved it, too, and he was really good in that episode. What I loved was that we started to hear from so many people as a result of that, who were either inspired to quit or wanted to quit but couldn’t or were tormented by it.”

The warm response from fans eventually led Levitt to conduct a little experiment of his own. The two advertised a website called Freakonomics Experiments where you could ask a question like “Should I quit my job?” or “Should I become a Christian?” The website would flip a coin and let the toss decide your fate.

“It was him taking our podcast and turning it into a science experiment which then fed into Think Like a Freak,” Dubner says. “I was happy, because it seemed like the most organic ending.”

It’s apparent from talking with Dubner that he’s a man shaped by a spirit of humility and humor. When it comes to describing his partner-in-crime, Dubner only has exorbitant praise to sing, tempered by playful self-deprecation.

“I’m never gonna be as smart as [Levitt],” he laughs. “But sometimes there’re small, narrow, useless areas of the world where I’m slightly better than him. So it works out.”

Dubner continually wants to learn, and he’s tremendously appreciative toward anyone who helps him do so. Once he’s heard an interesting story or happened upon a new idea, he writes a book or records a podcast because he simply has to share it with the world.

When asked what’s kept him writing Freakonomics-related material for a decade, his answer is both obvious and profound.

“It pays well. In every possible way.”

Mack Hayden has written for Paste, Relevant and Curator. He spends most of his time wondering when he can listen to Pavement and eat Chipotle again while worrying people will find out how much he actually likes Coldplay. He reads a lot and tweets from @unionmack, too.