Boston native Ben Affleck went full-on Masshole for his recent Funny or Die PSA urging New Hampshire residents to register to vote in the presidential election. That means he’s resurrected his dormant Boston accent and donned an orange puffy vest and flannel shirt as a show of solidarity for his “kid brother” New Hampshire. Standing in front of a background of birch trees and covered bridges (ahem, Hollywood green screen), Affleck tells “New Hampshirians” how pivotal our vote could be for transgender bathroom issues, climate change and women’s rights.

“You care about people gettin’ to piss in the fuckin’ bathroom of their choice? Then guess who’s got your back in this election? My basically home state New Hampshire,” Affleck says. And as a Massachusetts native who now lives in New Hampshire, I feel wicked qualified to break down this PSA and determine whether what Benny “The Sweet One” O’Callaghan says is true about us.

1. We all wear puffy vests and flannel shirts. 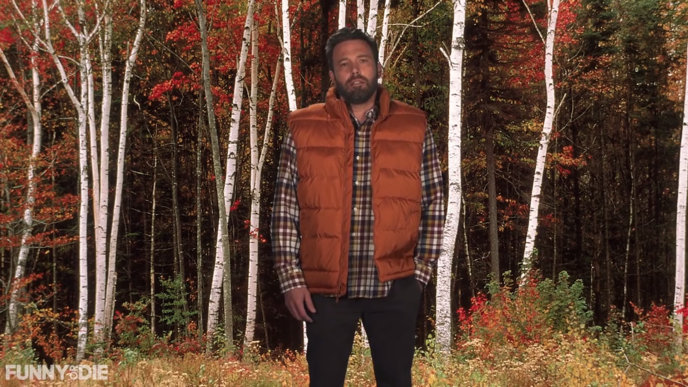 While we appreciate Ben’s nod to New Hampshire’s many outdoor recreational activities, not everyone here wears puffy vests all the time. They’re good for fishing, camping and shopping at the L.L. Bean outlets, but dude, we’re just the Live Free or Die state. If you want to ensconce yourself in puffy vests, you’re gonna have to go to Vacationland, a.k.a. Maine. It’s just to the right of us.

2. Climbing Mount Monadnock is a treasured pastime for those in both states. 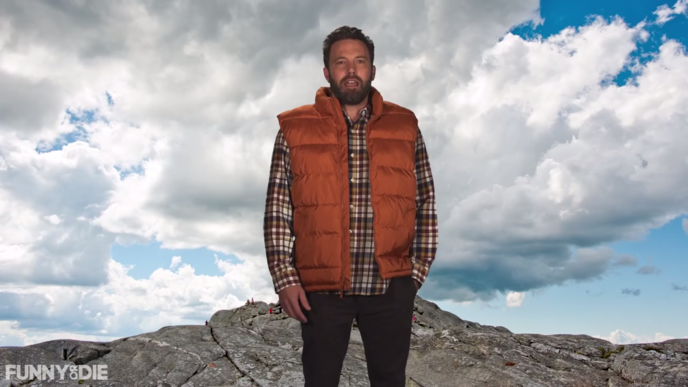 Growing up north of Boston, it seemed like anytime anyone was going to climb a mountain, it was Monadnock—or as Affleck lovingly mispronounces it, “Mount Monondrock.” Elementary school students and Scouts took field trips there because it’s an easy climb. People go to the packie (Ed. note: apparently slang for a liquor store! Pretty cool.), then get smashed on PBR at the top. But I digress.

3. Massachusetts and New Hampshire love each other. 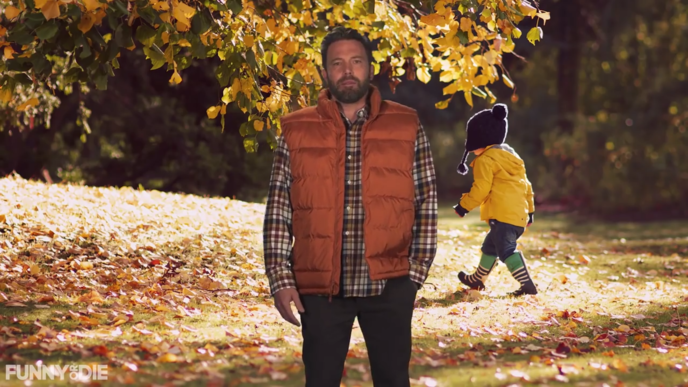 Granite Staters go south because Massachusetts has all the good clubs and the closest Ikea; Bay Staters come here to enjoy our 0% sales tax and plethora of tattoo parlors. It’s a magical symbiosis.

4. New Hampshire residents are “too good” for all this ugliness. 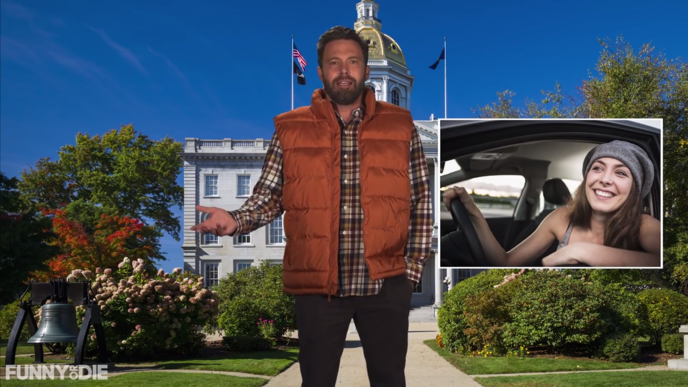 Affleck says we’re so nice we don’t even yell at people in their cahs. He clearly hasn’t been to Newport recently, which, coincidentally, carries the nickname “The Sunshine Town.”

Here’s another example: During a debate during the 1980 presidential primary, the Nashua Telegraph’s moderator wrongly >threatened to turn off Ronald Reagan’s mic. “I am paying for this microphone, Mr. Green!” Reagan said, clearly outraged. It was a turning point which led to Reagan winning the presidency. New Hampshire politics: crusty, yet influential since 1980. 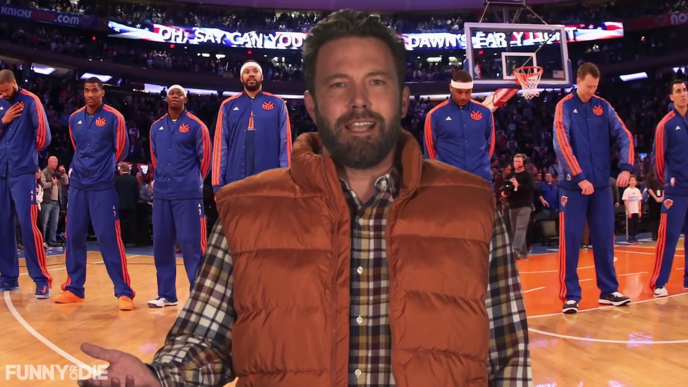 Affleck equates this god-awful presidential election to the failing New York Knicks, and strangely, not the Yankees—the natural enemy of all Red Sox fans. I actually don’t know how bad the Knicks are this year, but I’m legally obligated as a member of Red Sox Nation to hate all sports teams of New York origin.

6. The Curse will affect the rest of the nation unless all of NH registers to vote. 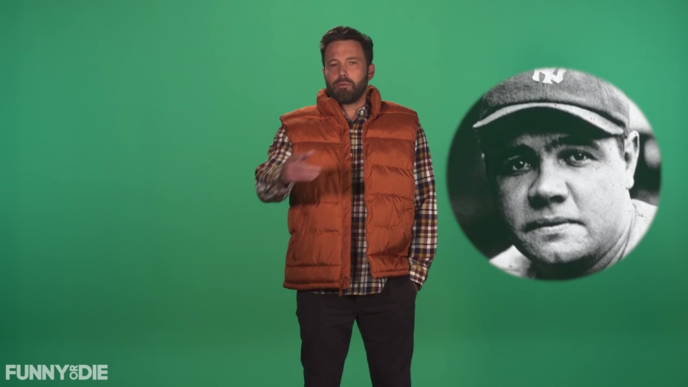 Affleck apparently still believes in the Curse of the Bambino, which doomed the Boston Red Sox to lifetimes of losing seasons, endless heartache and bad trades after Babe Ruth was traded to the Yankees in 1918 (). First of all, Affleck needs to chill. The Red Sox won the World Series in 2004. And again in 2007 and 2013. I would think the curse is currently in hibernation, but if you find that statement even remotely blasphemous, feel free to @ me.

7. People in Massachusetts talk wicked weahd, and say things like “clean ya cah,” and “drink from the bubblah” 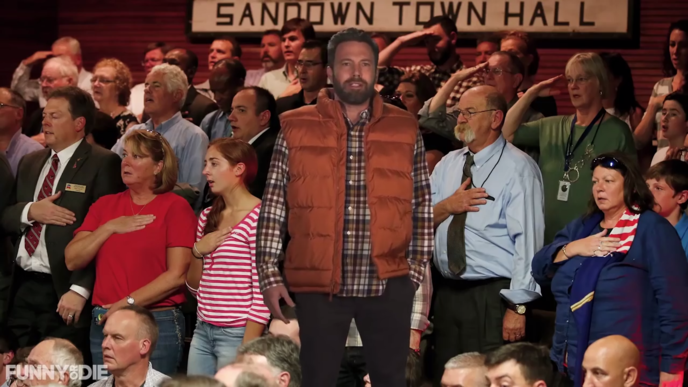 8. New Hampshire is kind of like Massachusetts’ kid brother. 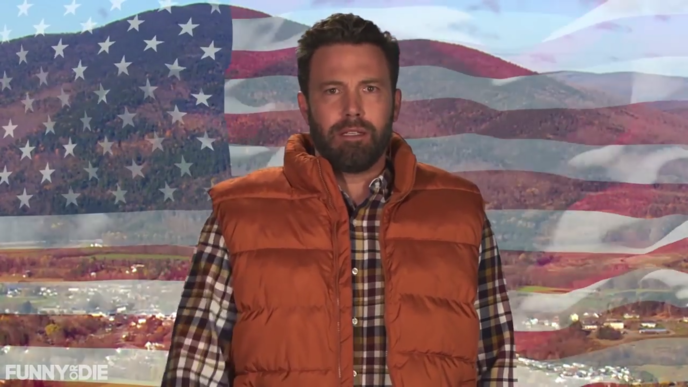 And just like a big brother, sometimes you take advantage of us. We know when you come up here—the death-crawl of traffic from the Massachusetts border to Seabrook, Portsmouth and Concord every Columbus Day weekend and every Labor Day reminds us that New Hampshire is your playground. Hey Ben, we’re no angels here either, but could you be a big brother and see to it that visitors try not to litter our campsites, leave messes in the public bathrooms and follow the posted speed limits? Thanks, guy. 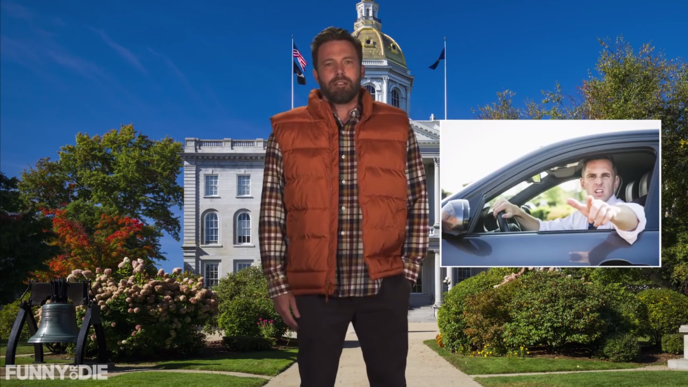 Affleck’s script in this PSA is littered with curses, as it should be. They don’t call us “Massholes” for nothing. And just moving out of Massachusetts—to NH, or Hollywood, whichever the case may be—doesn’t magically clean up your language. Ben fuckin’ nailed this one.

10. All of New England is counting on New Hampshire this election. 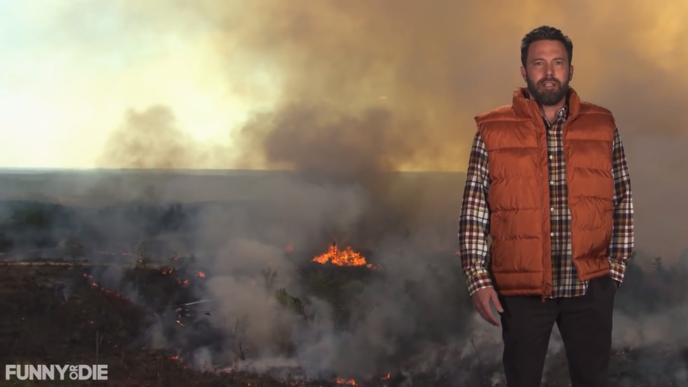 Don’t do this to us, Benny.

Listen, we already know we have a lot of responsibility every four years. Remember this year’s primaries? Lines out the door. Regardless, we’ve got our own asses to worry about every day. Our state motto is Live Free or Die, which means helmet-less motorcyclists can feel the wind whip through their hair on their way to the gun range. We’re the only state without laws restricting knife ownership— unless, of course, you’re a felon. We could all die in a blaze of glory up here, so the rest of you are on your own.