See, Killface’s earlier plan to destroy the planet—by flying it into the sun—backfired, instead moving just far enough away from the sun to stop global warming. The world was saved. As a hero, Killface easily wins the Democratic nomination. His arch nemesis, Xander Crews, decides to run against him as the Republican candidate. What follows is mostly nonsense and tangents, which is why, more than any other political satire, it predicted the 2016 election. 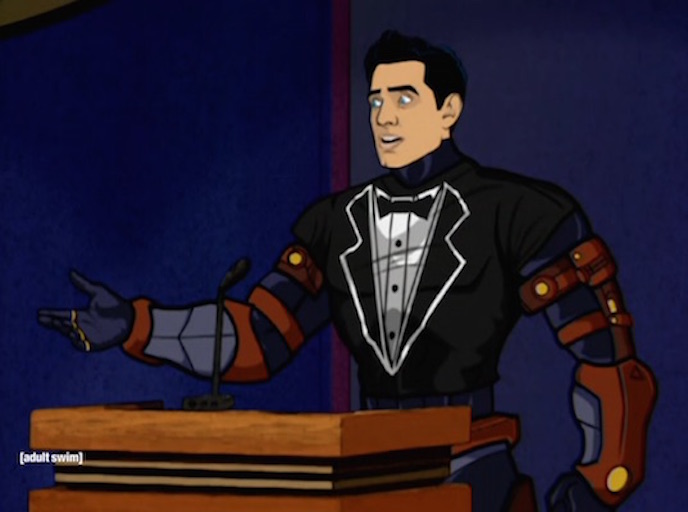 Crews is an idiot who decides to run for president on a platform of spite and ego. It is repeatedly pointed out that he has no experience, he has done a terrible job running his company, and he consistently treats women and minorities like garbage. Yet he has the money to run, so who’s going to stop him? Oh yeah, and he went completely bankrupt. 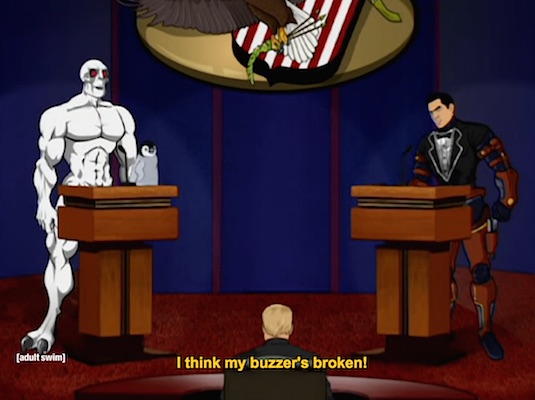 Am I suggesting Hillary Clinton is some sort of alien monster? Of course not. Am I suggesting that, to many Americans, a woman is power is more threatening than a taloned space beast? Yes. Here are the facts: Killface is more educated. He is enthusiastically championed by his party and then kind of forgotten. He has a diverse campaign staff, even if it’s only for show. Sure, you can call him war-mongering or power hungry, but ultimately Democrats feel that Killface’s positive contributions outweigh any of that. 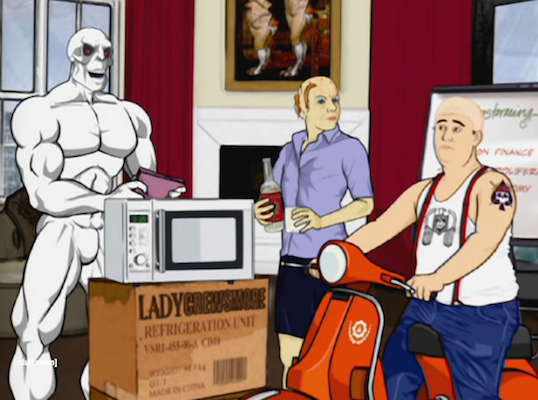 Killface is shocked when Wendell Stamps, who was always kind of a loose canon, starts dealing meth to neo-Nazis to raise campaign funds. Killface’s campaign manager, Dottie Bunch, chides him for being so naive:

Dottie: Oh grow up. Do you have any idea how many American politicians are funded by the neo-Nazis?
Killface: Shut up.
Dottie: My god, there’s Congressman [bleeeeep] and Senator [bleeep]. Oh! Not to mention Vice Pr[bleeeeep].
Killface, to the cameraman: Going to bleep those, I hope.

See, the joke is that no politician would want it to be public record that they were supported by white nationalists. It really was a simpler time in 2007.

4. Crews Made Headlines (But Not the Good Kind)

Crews’ long-suffering girlfriend, Grace Ryan, is a reporter and the only real enthusiastic Crews supporter we see. All that makes her different from a Fox News’ pundits is that she isn’t blonde. Otherwise, she has the exact same misplaced belief—that a man will change—that conservatives seem to have about Trump.

There is really no better encapsulation of conservative pundits’ relationship to Trump than Crews abandoning a bunch of reporters on a crashing plane and Grace Ryan responding, “Still can’t stay mad at him!” as she leaps after him, sans parachute. Oh, and about that plane crash—Killface shoots down Crews’s plane, killing a bunch of reporters. The candidates literally destroy the news media.

In August, Trump accused President Obama of being the founder of ISIS—an accusation nearly as bold as Wendell’s insistence that Steven Seagal is Taliban.

Immigration has been a hot button issue this election. Trump has been strongly advocating for a border wall; in many ways, the pedestrian overpass suggested by Crews and TV pundit Carter Hawkins is a more reasonable suggestion. A pedestrian overpass would be a bridge over the entire length of America, allowing immigrants to walk into Canada instead. It would be equally impossible to build such a bridge, but it does feel less hostile than a wall.

What went so wrong with Trump sons that they could kill this beautiful creature pic.twitter.com/L1gquLQrRz

I really wish “grey market safari” was not a real thing I needed to be aware of during a real presidential election, but here we are.

9. Come On, We’re Doing Everybody

Frisky Dingo brutally tackles hollow political pandering, especially the way Democrats pander to minority voters. After Killface offends an African American church by calling Christ a “bad motherfucker,” he tries to win back the African American community by naming rapper Taqu’il his Vice President. Taqu’il is the only person running who knows how the government works, but that’s meaningless to Killface compared to the “net gain” of the 13% black vote. For a real world example, look at pretty much anything white Democrats have tried to do to seem hip—but that deserves its own list.

What Frisky Dingo really demonstrates when revisited is that the American people will put up with nearly anything. We’ll let a literal monster win the primaries if they’re popular. We’ll forgive offensive tirades if the candidate has a good spin team. We’ll excuse blatant pandering. We won’t care if a millionaire has a private army or decides he wants to be president. We just don’t care.

In conclusion, please vote and/or watch all of Frisky Dingo on Hulu.

Sara Ghaleb is a writer and comedian living in Los Angeles. She takes pop culture much too seriously. You can see her sketch team The Burbs perform at The Nerdist School Stage every month. Follow her at @saraghaleb.
Tags