Political impressions may well be what’s kept SNL alive for the last twenty years, if not the show’s entire run. With the ongoing—but thankfully almost over—2016 election, SNL has found itself a veritable gold mine in the battle between Hillary Clinton and Donald Trump. The show seems to be on the up-and-up lately, thanks in no small part to a slew of fantastic new writers (we’re looking at you, Anna Drezen and Julio Torres). But the backbone of the show is still formed almost entirely by political impressions; regardless of who inherits the Oval Office, I doubt this will change anytime soon. With that, we look back at SNL’s fifteen best political impressions.

A note: There is a conspicuous, unfortunate under-representation of female cast members in SNL’s political impressions. This stems both from a tendency for female politicians to be played by men (as was the case with Margaret Thatcher) and from a tendency for major female politicians or political figures to be portrayed only a once or twice, while a male politician could be portrayed up to a hundred times. This list tries to spread the love a little, so before you ask: No, Chevy Chase’s Gerald Ford is not on here. No, it wasn’t that great an impression to begin with. And, yes, Chevy Chase is doing just fine. I think. 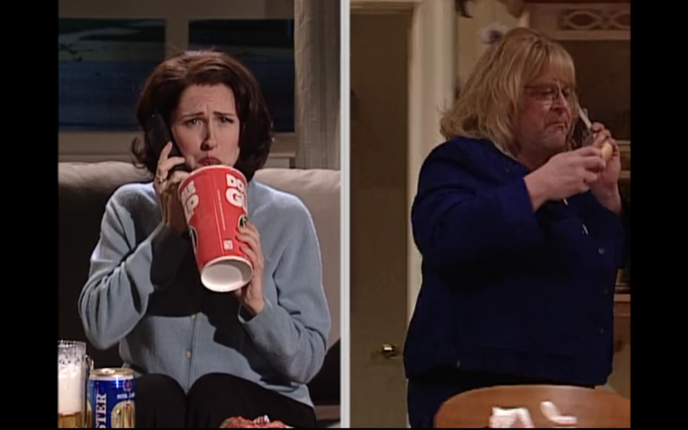 Coming in at number 15 is our only depiction of a non-politician. That said, it’s not hard to classify Monica Lewinsky as a political figure. Molly Shannon’s Lewinsky is sort of a heightened version of Shannon’s natural character: all wide smiles and fervent head twitching. But when I say “heightened,” I mean that in one second Shannon’s Lewinsky seems totally under control, when in the next she bursts into horrifying manic laughter. Why Lewinksy made America so uncomfortable is a subject for a smarter, more nuanced writer than I, but Shannon takes this element of Lewinsky and sprints with it to great success.

The only non-regular SNL cast member to make it onto this list, Baldwin’s Trump can be summed up in his take on Trump’s leering, sharklike pursuit of Clinton during the second presidential debate: pure malevolence. Baldwin takes Darrell Hammond’s impression of Trump and ups the ante, delivering the Donald J. this generation has come to know and fear—not just a sneering bully, but a psychotic Bond villain to boot.

It was tempting to selected Sudekis’ Joe Biden, in which he effortlessly leapt into the Veep’s role as a lapdog-sidekick-golden-retriever-Robin to Obama’s Batman. But with Romney, SNL had the unique opportunity to tackle a man of truly infinite sadness, a Vanya-esque character of untapped potential and robotic repression. Sudekis delivered. 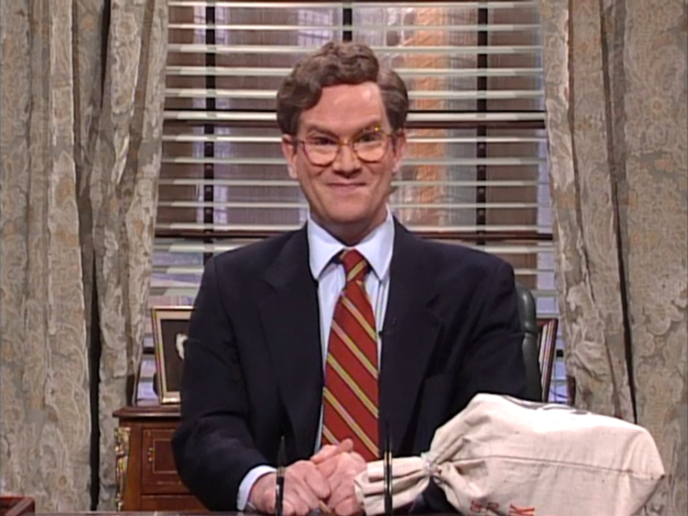 When Mark McKinney, who came to SNL after a legendary run on The Kids in the Hall, was largely underutilized during his tenure as a cast member; he wouldn’t get a chance to deliver a really singular comedic performance until Slings & Arrows became a big ol’ cult thing. But in publishing executive Steve Forbes, McKinney found a bug-eyed, giggling, supremely out-of-touch avatar for all his stuffy weirdness as a performer: “I used laser beams from my own satellites to blast away all these extra bits.” 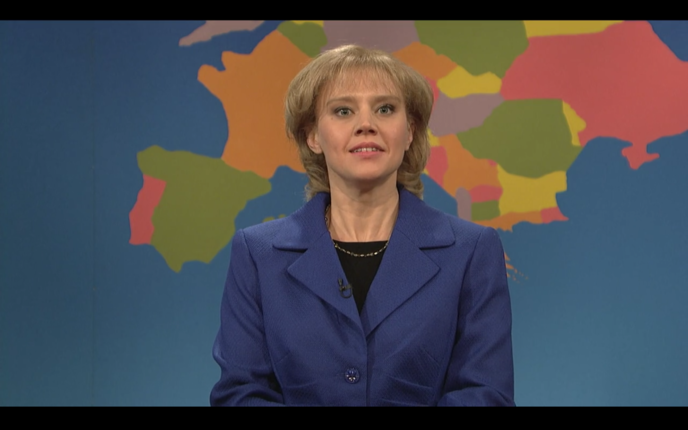 There’s a good reason Kate McKinnon appears twice on this list (I assumed you looked ahead). She takes the smartest, and often the funniest, path of least resistance when it comes to impersonations: Go for them at their meanest, saddest, lamest or pettiest. This certainly plays into her—in this case triumphant—Hillary Clinton, but it’s also on display in her overwhelmed, perpetually repressed impression of German Chancellor Angela Merkel. I could mention the extreme physicality or winning Hans Grueber accent, but she honestly had me at “Ahn-gela.” 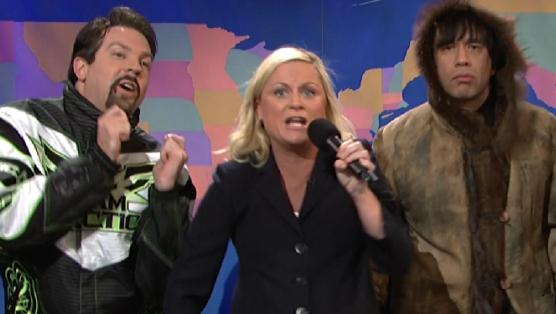 Ed. note: NBC seems to have scrubbed all records of this impression from the web, so here’s a fun picture of Poehler, I don’t know, rapping?

As I mentioned earlier, SNL has a not-so-great track record with its female cast members, especially when it comes to political impressions. When they come around, they are too often portrayed by men. Which is why it was more than appropriate that Amy Poehler play prematurely-aged-boy-detective Dennis Kucinich. She leans way into the little boy approach, delivering a Mickey Rooney-esque Kucinich who’s constantly going up for dunks but just can’t make it. Poehler’s Clinton is also fabulous, no doubt about it, but her Kucinich displays more of the specificity and flexibility that made Poehler an invaluable cast member to begin with.

Pharoah did the best he could during his tenure as Obama, but SNL has never really been able to nail Barry down. Perhaps it’s an over-reliance on the “uhhh,” or the fact that POTUS has a pretty good sense of humor to begin with. Anyway, Pharoah’s real accomplishment is his catatonic Ben Carson: a take that is both sleepier than the man himself but somehow infused with an undercurrent of energy I imagine Carson would envy.

There was a time, and it may be hard to remember, when politicians were not necessarily the most thrillingly entertaining people to watch do their thing—and, by extension, were not necessarily the most interesting people to see impersonated on TV. Sometimes you kind of had to blow things a little out of proportion, which could work well or could bomb horribly. George H. W. Bush was one of these cases. He was super boring. Thank God Dana Carvey was on the case to give us this rambling, jack-o-lantern, skeletal take on Bush Sr.

7. Will Forte as George W. Bush 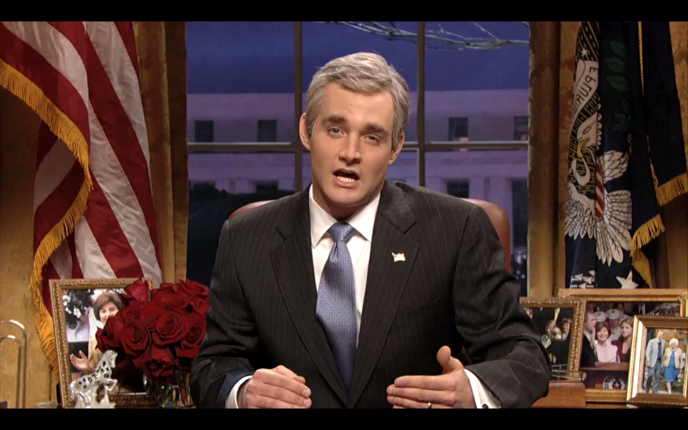 This one has been largely forgotten, and I’m not sure why. It did have the misfortune of having to follow Will Ferrell—more on that later—and Forte does not really look anything like Bush. However, he does impeccably nail “serious” Bush, the one to deal with various tragedies and scandals, and somehow still manages to make it riotous. Forte’s W. is an over-articulating idiot take on the Man With No Name: a president who wants to think of himself as a cowboy, but doesn’t realize he’s a cactus. Does that scan? 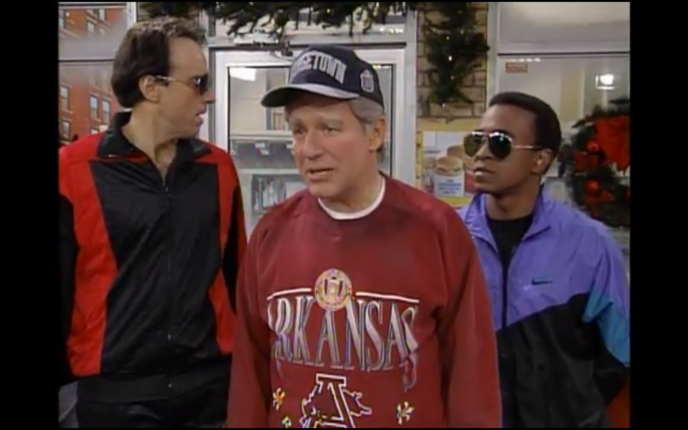 This impression could have made the list on the merits of the above sketch, perhaps SNL’s best sketch involving a president ever. Thank God the impression is fantastic as well. Phil Hartman, a possible contender for greatest impressionist/cast member in the show’s history, nails the tiniest details, like that pickiness as he reaches for the fries. There is no jolly man of the people lurking behind Hartman’s eyes, but a voracious glutton who wants pleasure and wants it now. If that doesn’t sum up a politician in one swift move, I don’t know what does. 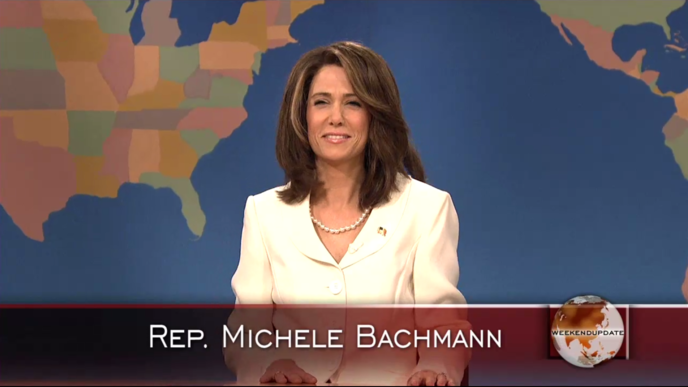 From Target Lady to the woman who was really excited about parties, Wiig was SNL’s resident master of the unhinged. An unusual fit, therefore, for the tense, unblinking, perpetually “nice” Michele Bachmann. And yet, despite her almost complete lack of movement, and maybe because of it, Wiig nails Bachmann: her face contorts itself into a rictus smile, her thumbs become absurdly and disturbingly flexed, and—in part thanks to the writing, obviously—she masters Bachmann’s endlessly circular, totally meaningless rhetoric. 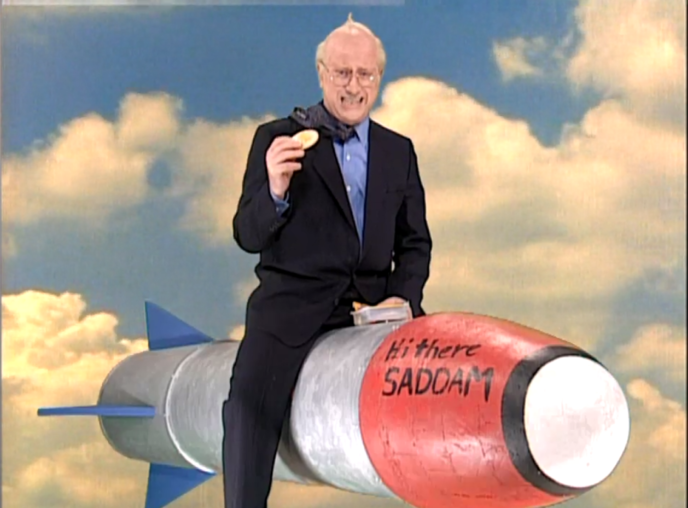 As with Hartman, is was difficult to pick just one Darrell Hammond impression from a list that includes masterful Trumps and Clintons (taking the ego and lecherousness and cranking it up to eleven and eleven, respectively). But Hammond really cuts to the chase with Cheney. From the get-go he paints a way-too-detailed portrait of his subject as a supremely unpleasant man, snarling and licking his lips like Danny DeVito’s Penguin. I can’t say this is the most enjoyable impression to watch over and over, but it is certainly one of the best.

Ah, the impression that birthed a thousand block party Halloween costumes. When people are regularly confusing the impersonator for the impersonated, you know there’s some sort of alchemy going on. Fey took her head start and ran with it, delivering an iconic performance of air-headed ignorance that became the second most memorable part of the 2008 election cycle, behind the whole Obama thing. So while Fey automatically ranks simply for sheer physical resemblance, she scores even more points for her Far Side-esque elevation of Palin’s ticks into a Central Park caricature of a person.

McKinnon edges out Amy Poehler’s arguably just-as-good Hillary largely because we’ve now seen an HRC who’s had to put up with more bullshit than any other figure on this list (well, except Obama, probably). The New Clinton, at the end of her Lord of the Rings-style quest this election season, has earned the right to gloat at how her opponent seems to be destroying himself on a massive public stage. McKinnon takes the debate-club-captain, Tracy Flick aspect of Clinton and allows her to shimmy and let loose in a big way. It’s glorious to see, and an Emmy well-earned.

1. Will Ferrell as George W. Bush

In the same way that Oh, Hello has found itself able to adapt to whatever the situation demands, Will Ferrell’s masterful W. takes a very, very specific, recognizable type, and makes it flexible enough to accomplish anything. We’ve seen his George from the very beginning all the way up to the death of Bin Laden and beyond. It’s been the show’s most enduring impression; he’s always been there, and always will be, nailing the sheer focus it takes for W. to get through a conversation. There’s a reason Ferrell managed to swing a Broadway run out of the whole thing. He becomes a Simpsons character in the flesh, a real-life Ralph Wiggum—and for that, he takes first place.

Graham Techler is a New York-based writer and actor. Follow him at @grahamtechler.
Tags