The Daily Show with Trevor Noah, which premieres tonight, unveiled its new set to a group of journalists and critics last Friday morning. Though there were a few cool details (touch screens! modular design! more room for bands!), the redesigned set mostly left a “meet the new set, same as the old set” vibe. During the event it became clear that there would be more than just cosmetic changes to the show with its new host, but it’s still unclear what exactly those might be.

During a question and answer session, Noah gave reporters a glimpse at what stylistic and tonal changes he might bring to the show. I wish I could say he also gave a glimpse of how the content of the show might change, but, perhaps tellingly, specifics were sparse. Noah is tremendously charming and smart, which are both vital to being the host of a program like The Daily Show. As he presented himself during this press event, he’s also soft-spoken, thoughtful, calm, deliberate and even cautious—to a fault. Most noticeably, there is a clear reluctance by the entire Daily Show team to provide any details on Noah’s viewpoint on any specific topics.

Time and again throughout the questions, Noah deferred from voicing any firm stances, saying he finds “targets” (specifically relating to Jon Stewart’s adversarial relationship to Fox News) limiting, that he’s politically “neither right nor left,” answering a question with a double-sided phrase like “my first instinct would be to say ‘yes’…and ‘no,’” and deferring to producers to describe his takeaways from watching the Republican debates (other than a general appreciation of Rand Paul, who Noah liked for seeming to be the most thoughtful). When asked about describing himself as a “political progressive,” Noah quickly corrected: “not a political progressive…I consider myself a progressive person…Progression to me is identifying your shortcomings…and trying to find the place where you improve on those.” 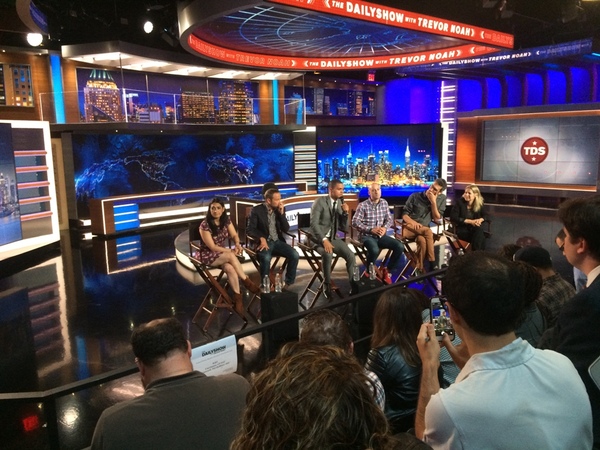 Noah is trying to position himself as a bit of a wide-eyed or even naive outsider. He’s being dropped into the middle of a political and media landscape with firmly drawn lines, and is ready to rationally consider all sides and thoughtfully enunciate then dismantle the “bullshit” Jon Stewart left us all vigilant for in his final remarks…if and when he encounters it.

But most viewers and fans of The Daily Show with Jon Stewart loved it not just because it was funny, but also because it had values and principles that it pursued diligently. So far, Noah’s careful refusal to enunciate any specific topics of interest to either him or the new show leaves me feeling wary. The staff sounds more and more like the groomed, talking-points-in-hand political candidates the show traditionally skewers: cautious that every word appeal to as broad an audience as possible, and leaving as many doors open as possible to follow wherever that broad audience may wander.

And to be fair, The Daily Show isn’t a political candidate being judged on issues. It’s a TV show whose primary goal always will be garnering as many viewers as possible. Rightly so! And Trevor Noah doesn’t have to be a political doppelganger of Jon Stewart for the show to keep its appeal, and it’s totally reasonable that he and the show should be taking some time to discover exactly what his political filter is. But the thing that made The Daily Show so vastly popular, that turned it into an institution that greatly influenced the national debate, was that it dared to have a viewpoint, an angle, any kind of agenda at all. And until Noah is able to articulate something, anything, that the show stands for or cares about, it’s going to have a very difficult time resonating with anything close to the same power The Daily Show had under Jon Stewart.

Chris Wade is a video producer and writer in Brooklyn. You can follow him on Twitter @saywhatagain.

the daily show with trevor noah