Irish scribe Garth Ennis is the architect behind some of the most iconic runs in comics history: Preacher, Hellblazer, Hitman and Punisher: MAX, to name a few. He wields a rare mastery of the single-issue story (like the classic rooftop conversation between Tommy Monaghan and Superman in Hitman #34) and the years-long arc (the aforementioned Preacher with the late, great Steve Dillon). Ennis’ catalogue sports a wide scope, but one approach dominates even as he surfs genres: he loves to write satires—particularly satires aimed at superheroes, a spandex-clad genre Ennis despises for its dominance of comics.

With Ennis launching a new spy spoof this week—Jimmy’s Bastards, with longtime collaborator Russell Braun for AfterShock—we look back at some of Ennis’ many ludicrous, hilarious, satirical comics. 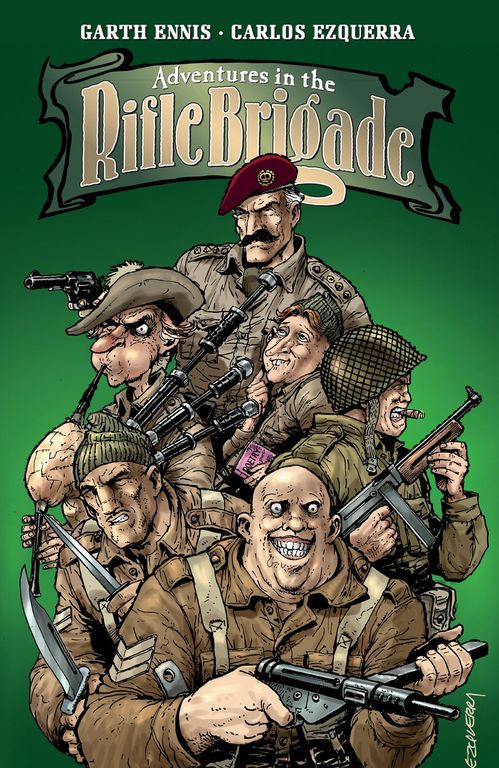 Ennis’ war comics have mostly been serious, like the recent Dreaming Eagles, a wonderful story about a black World War II veteran explaining his experience to his son during the Civil Rights movement. But Ennis’ superpower is taking the piss out of anything, and this series is a giddy dive into wartime shenanigans that would make Monty Python proud. There are only two three-issue arcs, but they’re both a hoot, particularly the second, which involves not only an elephant’s penis but Hitler’s lost bollock. 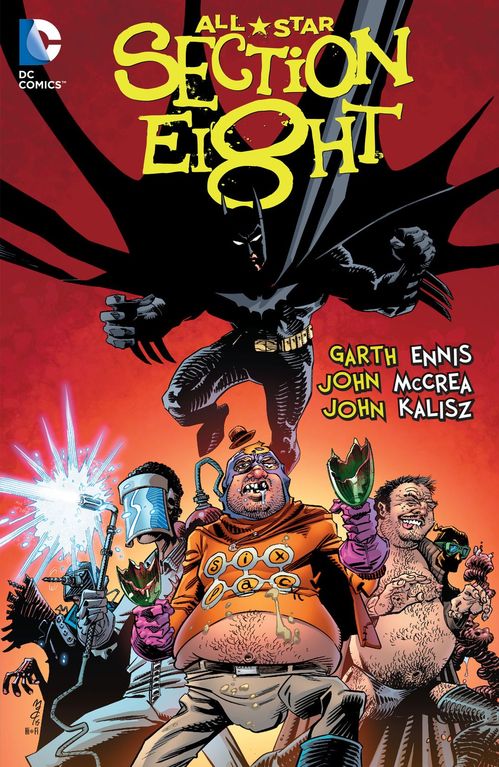 Hitman ended [spoiler alert] with the demise of the title character, a rare, meaningful death that’s been left alone (so far). But the Gotham neighborhood of the Cauldron and the sleazy bar (appropriately called Noonan’s Sleazy Bar) have lived on in two ludicrous mini-series, the first illustrated by McCrea and the second by Braun. Sixpack—the portly, alcoholic, multi-stained loser perpetually wielding a broken bottle and yammering about crises—was always good for a bit of superhero comedy in Hitman, and he proves amusing enough to be a lead character. A highlight of the first series: Sixpack, chatting with Superman in the Fortress of Solitude, attempts to drink the bottle city of Kandor. 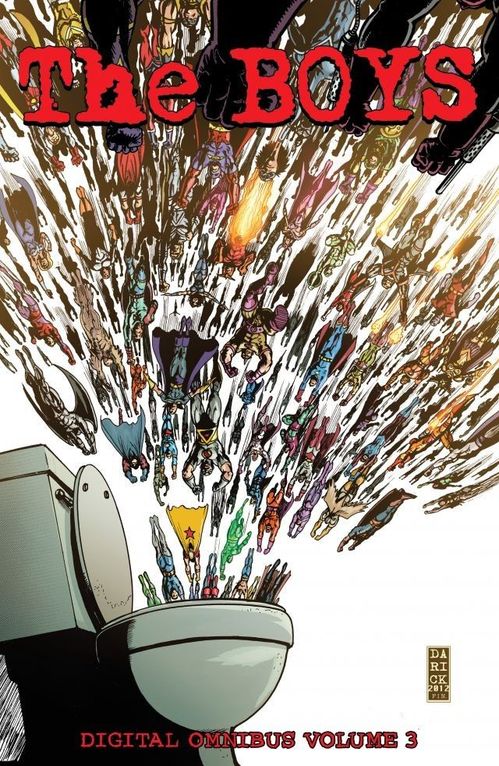 The Boys is the most thorough decimation of the superhero genre by anyone, let alone by Ennis. The Boys are a CIA team meant to keep “supes” in check. This is an important task, since the supes in this world are a bunch of sexually predatory morons in the pocket of an evil corporation. The Boys features analogues of well-known capes aplenty, giving Ennis a chance to roast superheroes in a way their parent companies would never allow. Can you imagine DC greenlighting a story in which Robin walked in on Batman getting intimate with the Batmobile’s tailpipe? (In fact, the first six issues were originally published by a DC imprint before landing at publisher Dynamite.) Thanks to Tek-Night and Laddio, Ennis included this very plot point, which is one of the least disturbing incidents in this strong series. Ennis is so persuasive in his case against superheroes that he’ll make even the most rabid spandex-lover question their buying habits. 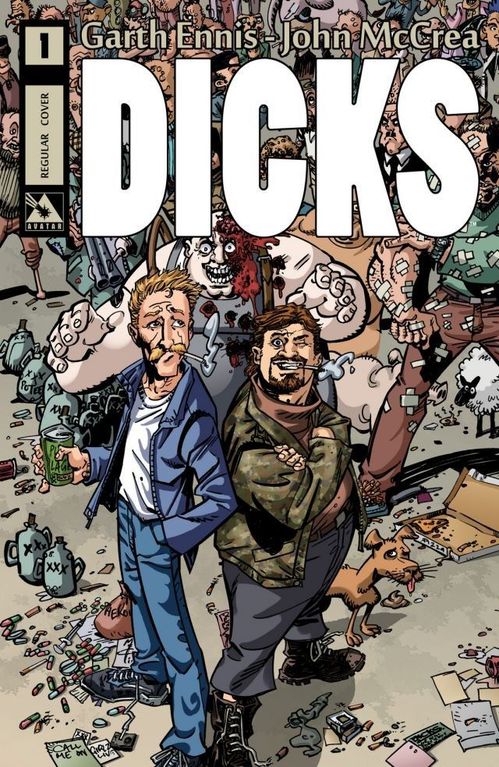 This series by Ennis and John McCrea will never get the critical acclaim of Preacher or Ennis’ more serious Punisher stories, nor should it. But Dicks is utterly charming in its own filthy way. Ennis has a soft spot for the series, as he’s said of the two protagonists Dougie and Ivor: “They remain my all-time favorites of the characters I’ve written or created—my pride and joy, the ongoing saga of two idiots from Belfast, by two idiots from Belfast.” This is a gloriously childish satire of detective stories full of thick dialects and perhaps the most disgusting art of McCrea’s career. That’s a compliment, by the way. 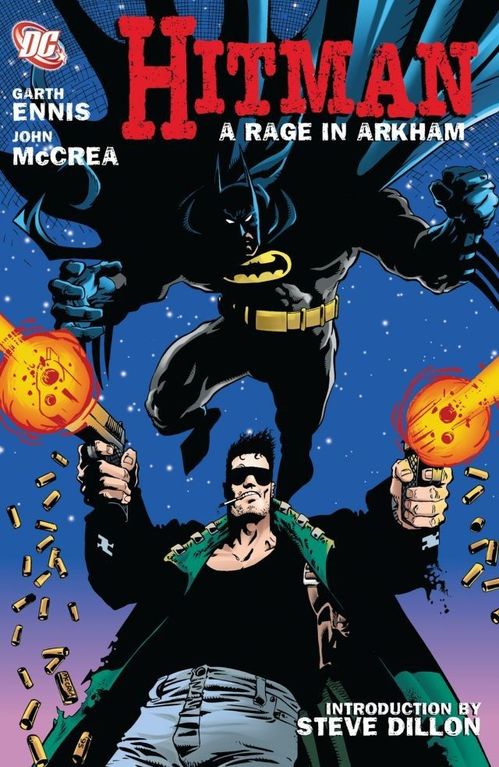 Ennis’ 60-issue classic run (illustrated by one of his most simpatico co-creators, John McCrea) wasn’t entirely a satire, except when superheroes get in the mix. It’s hard to believe DC allowed Ennis to treat Green Lantern like a cheapskate doofus in the story “Local Heroes,” but thank Oa they did. Slinging a dead cat on a sky projector was also titular hitman Tommy Monaghan’s solution for reaching Catwoman. (She wasn’t a fan). 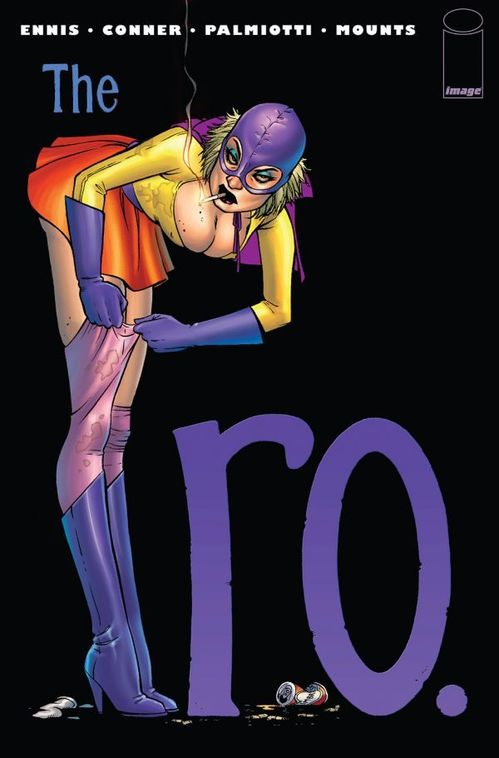 “Anyone can be a hero” is a common theme in comics. This graphic novel, illustrated by the terrific Amanda Connor, takes that concept to an extreme as aliens settle a bet by gifting a not-especially-heroic sex worker with superpowers. Fortunately, the joke isn’t on her: she really is more useful than Ennis’ analogues of the Justice League, a sad collection of lunkheads and perverts. The scene in which Superman—er, the Saint—receives some of the Pro’s special skills is a comedy classic that downs a commercial jet. 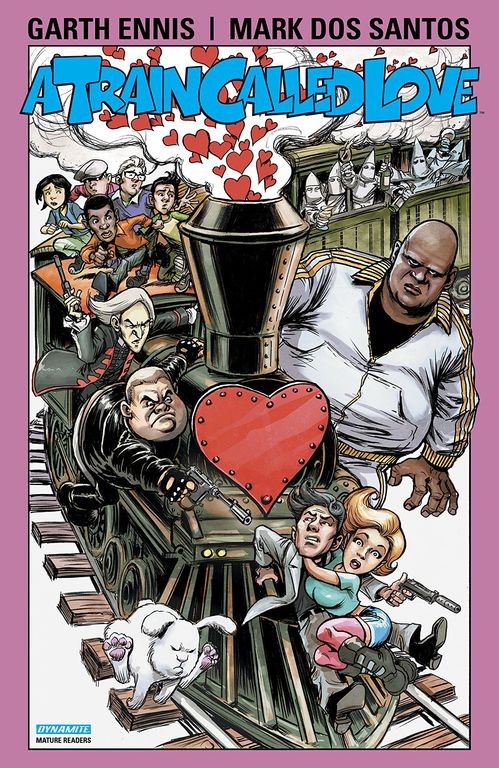 Romance comics, much like rom-com movies, have a sappy reputation that wouldn’t seem to align with the work of Ennis, whose output is generally hard-nosed, disgusting or both. But he does know how to write a legit romance: few love stories in any genre can match the saga of Jesse and Tulip in Preacher. In A Train Called Love, Ennis makes his first voyage into the genre, and it’s part satire and part full-gonzo insanity. All meet-cutes should be as Tarantino-ish as the post-murder meeting of Myles and Valerie.