Celebrities don’t exist, and I honestly think we’d live in a happier world if that became common knowledge.

For instance: when I tell people “I hate Taylor Swift,” I don’t mean I hate a total stranger about whom I know nothing, except that she sometimes works in recording studios. I mean I hate “Taylor Swift,” the mass media entity, who is not a flesh-and-blood human being, but a composite of ideas and images culled from songs, music videos, TMZ articles, magazine covers, makeup commercials and a plethora of other bits and pieces of content created by dozens of individuals with dozens of separate agendas. 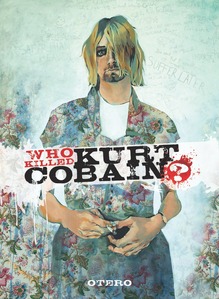 The “Taylor Swift” I hate—the same “Taylor Swift” almost everyone who talks about Taylor Swift is actually referring to—is an abstract concept, like Batman, Wolverine, Supergirl or any other comic book character.

This brings us to another handsome blonde songwriter whose mythology and terminal overexposure often overshadow his music. Since his death in 1994, Nirvana frontman Kurt Cobain has inspired numerous biographical renderings that paint him as a tragic martyr for the lost children of the Reagan ‘80s. He’s also been an action figure, a skateboard, a videogame avatar, a set of matryoshka dolls, a hideous park statue and, of course, a comic book character. The number of times Cobain’s suicide has been repackaged and resold across multiple media far surpasses that of prematurely departed contemporaries like Layne Staley, Shannon Hoon and Bradley Nowell. Barely anyone has died on TV as often as Cobain has, but among those elite few, there are Thomas Wayne, Martha Wayne and Ben Parker.

That’s not all the Nevermind mastermind may have in common with Batman’s parents; the 2015 documentary Cobain: Montage of Heck includes a taped interview in which he recounts losing his virginity to an illiterate, obese girl during his adolescence in Aberdeen, Washington. To amateur Nirvana historians who recognized the tale from 2001’s Charles R. Cross biography Heavier Than Heaven, it scanned as old news and therefore reliable. That is, until the Melvin’s Buzz Osborne came along.

“I know that whole…story is complete bullshit,” Osborne writes in his Talkhouse review of Montage. “That’s too good a story to have gone this long without me hearing about it….In that small-town [sic] shit-hole [sic], exciting news of that nature would have been common knowledge before the sun set. It never happened.” 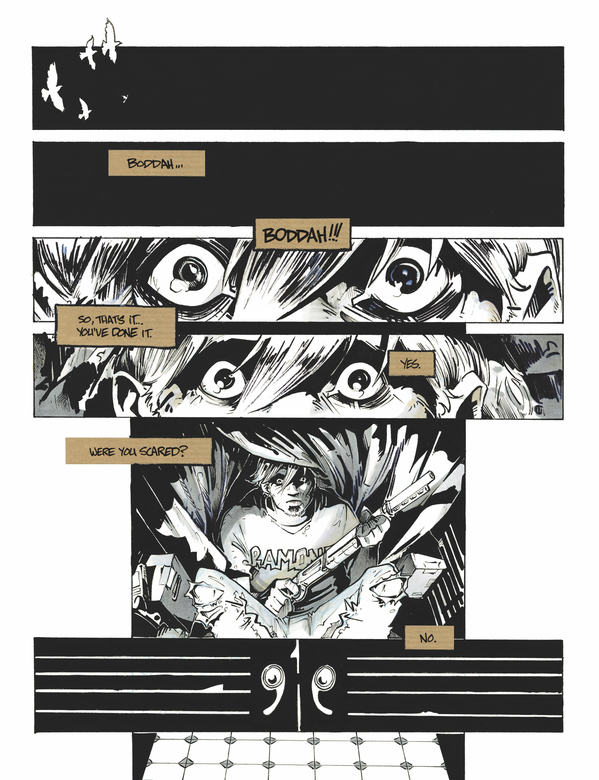 Osborne—a Cobain associate going all the way back to high school—dismisses 90 percent of director Brett Morgen’s opus as a goofy truckload of malarky, unintentionally casting doubt on Heaven’s factual bona fides in the process. If we take Osborne at face value, Cobain invented the virginity story out of thin air. He lied about chronic, crippling stomach pains, and merely told people his tummy really hurt as an excuse to do more heroin. And well before Osborne’s assertions, Cobain’s claim to have lived under the Young Street Bridge as a teenage runaway—the supposed basis for the song “Something In The Way”—had been widely debunked.

Kurt Cobain isn’t a credible source about himself. And while the moldy old spousal homicide conspiracy theory—dredged up as recently as the 2015 true crime farce Soaked in Bleach—defies common sense, that doesn’t mean Courtney Love has told the truth about her husband 100 percent of the time. It seems plausible, if not entirely understandable, that she strives to preserve specific ideas of who Cobain was and what happened during his life that don’t always gibe with other accounts.

Kurt Cobain the guitar player may be long gone, but not only is “Kurt Cobain” the abstract media entity alive and well, what we’ve been told about him feels increasingly far removed from any formerly living, breathing individual’s authentic history. Which is why Who Killed Kurt Cobain?—the 150-plus-page sequential tome by Nicolas Otero, based on the novel Le Roman de Boddah by Heloise Guay de Bellissen — resonates as a substantial missed opportunity, albeit the prettiest damn iteration of Cobain’s life story this reporter has ever encountered. 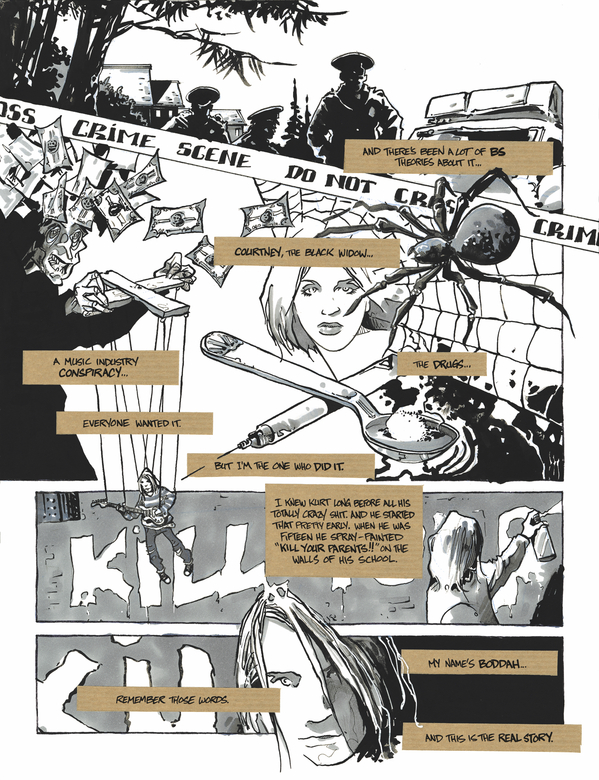 Otero offers up a reality-informed fever dream of Cobain’s life and Nirvana’s all-too-brief career in brutally evocative black and white, laid out more like a cluttered psychic scrapbook than a conventional comic book. Art-wise, the graphic novel summons automatic associations, spasms of madness and occasional moments of serenity, displayed not unlike how actual memories could appear on print.

But while a visual delight, the book amounts to a new-ish interpretation of a story its target demographic knows well by this point. For its anchoring conceit, Who Killed adds Cobain’s imaginary childhood friend Boddah as a histrionic narrator and supporting cast member in the Kurt & Courtney saga. Otero envisions Boddah—to whom Cobain, in the tangible world, inexplicably addressed his suicide note—as a codependent slob who wears a Ramones sweatshirt everywhere he goes. Boddah pops in now and again to discuss Cobain’s various dilemmas, all of which relate directly to either Courtney, drugs or death. You’d think they’d discuss music on a frequent basis, but nah, Cobain and his talking shadow find drugs and death way more interesting. 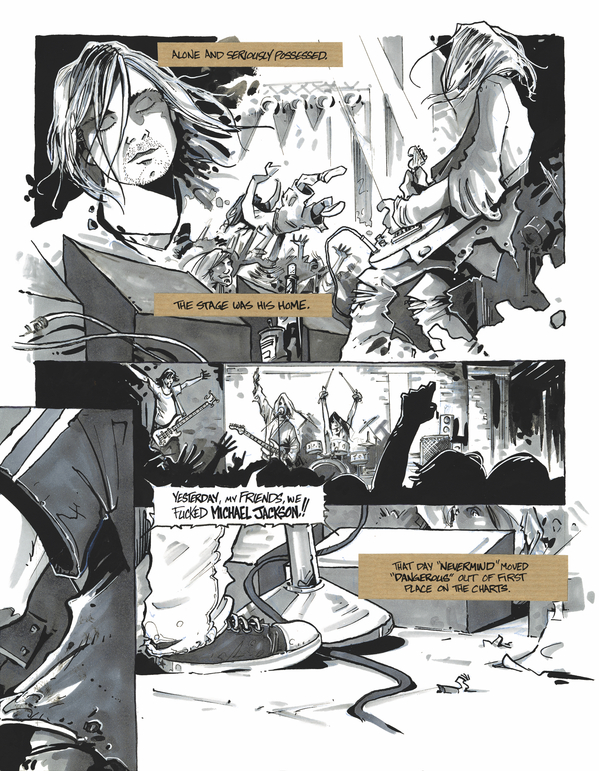 And if Who Killed was, from the start, intended as a work of fiction, is there any reason why Cobain couldn’t survive in this version of the story?

I’m sure I’m not alone in wanting to read a comic book about Kurt Cobain faking his own death, thereby escaping the prison of fame and decadence, and wandering the Earth, like Jules at the end of Pulp Fiction? Perhaps Cobain stumbles across the true whereabouts of Tupac Shakur, The Notorious B.I.G. and Princess Diana, all of whom also faked their own deaths. The new compatriots form a secret alliance of icons hidden in plain sight, committed to protecting the innocent.

If we’re probably never going to hear the real story of Kurt Cobain anyway, is a happy ending for “Kurt Cobain” every once in a while too much to ask?