It’s safe to say many of our readers aren’t feeling particularly patriotic this Fourth of July—a president tweeting videos of himself body-slamming CNN does a number on nationalistic pride, no matter your political affiliation—and the number-one flag-bearer in comics doesn’t offer much respite this summer. Captain America, Marvel’s red-white-and-blue leading man, is embroiled in a fascistic event comic, more often donning the toxic green of Hydra than Bruce Springsteen’s favorite three-color combo. Luckily, the industry extends far beyond superhero fisticuffs. This Wednesday sees the release of books aimed at a wide range of tastes, from high-fantasy political allegories to slapstick monster fighting to inclusive magical girls. It’s also a big week for Paste alums: occasional contributors Tini Howard and Magdalene Visaggio both launch new books, with Howard scripting a Rick & Morty mini-series based on the show’s Pokémon parody and Visaggio returning to her Eisner-nominated queer bounty hunters, Kim & Kim. So whether this holiday has you lighting up the fireworks or hiding out lakeside and doing your best to forget the state of the country, there’s a comic here worthy of reading while you recover from barbecue overload. 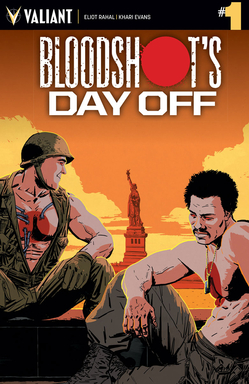 Bloodshot should be a parody, a remnant of the early-‘90s obsession with relentlessly grim, violent antiheroes. The idea of a big man with a gun mowing down his foes feels more chilling than thrilling in 2017, and it’s to Valiant’s credit that the modern-day incarnation of the pale protagonist has confronted concepts like PTSD and violence head-on. To mark the character’s 25th anniversary, Valiant has recruited regular contributor Khari Evans and writer/humorist Eliot Rahal to give Bloodshot something of a vacation. In Bloodshot’s Day Off, two nanite-enhanced soldiers—“Tank Man” and “Viet Man”—attempt to take some much-needed R&R. It should come as little surprise that the duo finds trouble during their tourist adventure, and Rahal’s comedic skills and Evans’ strong action cartooning combine to pay due tribute to Valiant’s unlikely enduring star. Steve Foxe 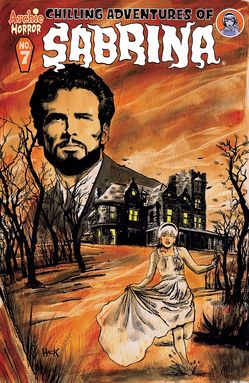 Save two weeks, a full year has passed without Archie Comics conjuring a new issue of Chilling Adventure of Sabrina, which is (literally) a damned shame. The spooky comic’s notable absence speaks to Roberto Aguirre-Sacasa’s mischievous, lore-packed scripts and Robert Hack’s evocative art, which immaculately mirrors the period’s smiling suburban charm with ghoulish subversion. We miss the ‘50s teenage spellcaster, and any week that offers more of her occult trials is worth celebrating. After the last issue explored the mysterious and shockingly tragic back-stories of Sabrina’s animal familiars (poor Salem), this new chapter kicks off the six-part arc “Witch-War.” Aguirre-Sacasa taps into some of the morbid humor of his televised Riverdale series where he served as showrunner, as the spirit of Sabrina’s father inhabits the body of her ex-boyfriend, Harvey Kinkle. Whether that premise will fulfill its Greek Tragedy potential or not, Hack’s layered, sepia-tone artwork will give it the nostalgic air of an ancient Hardy Boys paperback, faux brush strokes included. Sabrina rivals Harrow County for ominous campfire thrills, and hopefully this next arc will see her apparate on comic shelves much more frequently. Sean Edgar 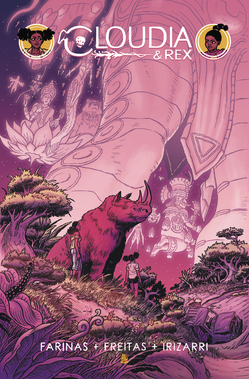 Orphans are uncomfortably common in comics, edging out deadbeat parents for most unfortunate family trend. What readers ultimately end up missing out on as the industry focuses on kids without families is the nuance and conflict that comes from a supportive, but fraught, family situation. With Cloudia & Rex, two young black sisters are thrust into adventure with powers well beyond what they’ve known, but with their mother’s support, rather than in the face of utter abandonment. It’s a welcome addition to what’s offered on the shelf, a mix of Weirdworld and Birthright and the underappreciated Umbral, a “chosen one” mythology with protagonists who are often not afforded the chance to have their own story and agency. Artist Daniel Irazarri has an inventiveness that’s fun and refreshing and the colors give the book a lush, illuminated appearance. Ulises Farinas and Erick Freitas successfully worked together on Judge Dredd and Amazing Forest, so it will be interesting to see their approach to young people and an emotional journey. Caitlin Rosberg 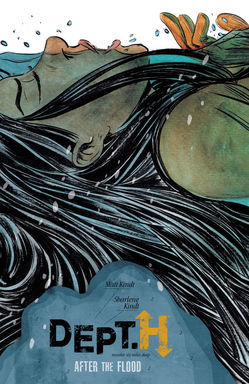 Like his previous sci-fi epic Mind MGMT, Matt Kindt’s Dept. H is best digested in large chunks over hours, letting every infographic and side narrative marinate into the novelistic whole it unabashedly is. The second volume, collecting issues 7-12, offers a series of character portraits inside a sabotaged deep-sea research installation. As the salt and brine flood the structure, crewmate Roger walks the reader through an ecosystem of personalities as dense and layered as the alien fauna surrounding them. One man is an altruistic killing machine abandoned by his government, while another holds a toxic grudge against a peer who neglected a fatal flaw during a previous expedition. All of these connections obscure the murder mystery of the project’s patron, Hari, with his daughter Mia tossed into the submerged chaos. Like their ensemble, Matt Kindt and colorist Sharlene Kindt have dived as deep as possible to reveal an environment more exotic than any intergalactic expanse. Washed through with Sharlene’s vivid, textured watercolors, Dept. H is an immaculate example of form-is-function storytelling, and a true event comic that reveals new shades of plot and character with each claustrophobic chapter. Sean Edgar 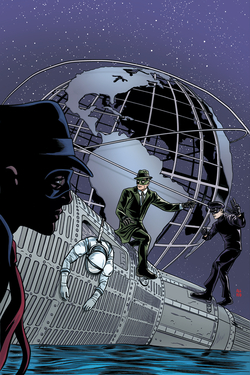 Everything old is new again in comics, though that itself isn’t very new. Radio and TV star Green Hornet meets the Spirit in the latest foray into nostalgic mash-ups. Batman ‘66 in all it’s various incarnations and Wonder Woman ‘77 proved that the market has space for throwback comics, and Dynamite is tossing their hat into the ring once again with a miniseries starring Will Eisner’s creation opposite the Green Hornet and his aide, Kato. The encounter takes place at a World’s Fair, a throwback unto itself, and the whole book promises to be steeped in longing for an earlier, more optimistic era. Writer Fred Van Lente has proven his chops on a slew of Marvel projects, and Bob Q is a relative newcomer to mainstream comics, but he’s got a sharp, expressive style with the ability to stretch the human figure for the sake of humor, a must for this title. If nothing else, the Mike and Laura Allred cover is worth nabbing this book. Caitlin Rosberg 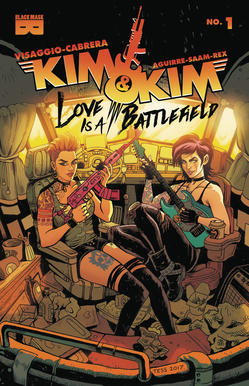 Magdalene Visaggio and Eva Cabrera’s first outing with the Kims—rad bounty hunters with ex drama and extra clips—was a fan-favorite and earned an Eisner nod for its rollicking mix of action and humor, and for putting its queer and trans characters at the forefront of a story that was informed by, but not defined by, their identities. Now Visaggio and Cabrera are back for a second tour of duty, and it kicks off with Kim D reconnecting with an old flame and the ladies nabbing a huge new bounty. Visaggio lives and breathes these characters, and Cabrera’s slick cartooning lends itself to the book’s sci-fi action hijinks as well as the elevated emotional and comedic stakes. Kim & Kim remains a highlight of comics’ increasingly diverse queer-inclusive offerings; and a purely enjoyable genre romp. Steve Foxe 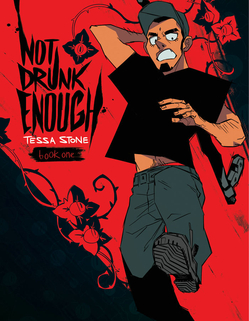 Continuing an industry-wide trend, Oni Press is distributing the print version of an excellent webcomic from a skilled creator, this time Tessa Stone’s Not Drunk Enough. Stone’s name might be familiar to fans who may have stumbled across her earlier—and sadly never completed—work, Hanna is Not a Boy’s Name. Stone’s sense of comedic timing and balancing slapstick with action and emotional beats are remarkable, well matched by her handle on motion and expressive faces. Her art is sharp and almost sketchy, but characters feel complete both visually and in terms of personality. Not Drunk Enough is the perfect mix of horror, humor and workplace shenanigans, revolving around a repairman who’s gotten caught in a strange corporate lab overnight. The setting is like something out of Resident Evil, populated by terrifying creatures that the protagonist and a ragtag group of fellow employees fight off. The story is just as much about human behavior as it is the creepy monsters that are weirdly cute in Stone’s style, and it’s the perfect antidote for grim and gritty or cloyingly sweet comics. Caitlin Rosberg 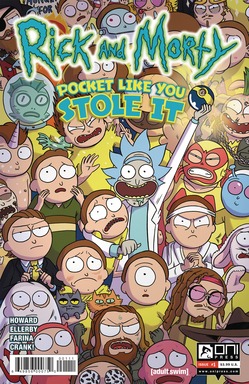 Oni Press’ Rick & Morty comics have done an excellent job matching the irreverent, I-can’t-believe-they-went-there humor of the Adult Swim sensation, including the series’ smart pop-culture parodies. Pocket Like You Stole It, a new five-issue mini-series, expands on the Pocket Mortys mobile game, a Pokémon nod that ramps up the dog-fight violence inherent to the video game’s premise…only with multidimensional Mortys instead of elemental creatures. Writer Tini Howard may be better known for horror (Magdalena) and sentai action (Power Rangers: Pink), but projects like The Skeptic demonstrate her skill at cutting tension with humor. Art team Marc Ellerby and Katy Farina match the show’s sketchy-eyed style without looking like flat screen captures. Rick & Morty’s TV hiatus ends soon—grab your Mortys and battle it out with this mini-series to tide yourself over until then. Steve Foxe 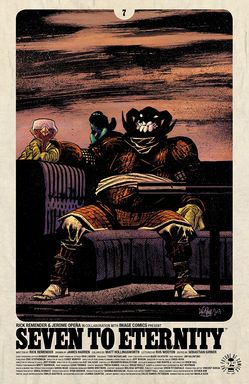 J.R.R. Tolkien and The Washington Post collide in Seven to Eternity, a fantasy series that revolves around political corruption and themes yanked from the headlines of everyday reality. The last issue literally drained a swamp stagnate with rage and hate, and this new chapter hints at the cost of unchecked industrialization. Writer Rick Remender carries these points saliently through strong characterization and an intoxicatingly cool world; terminally ill protagonist Adam Osidis questions the definition of greater evil as he barters with a magical despot for his life and his family’s legacy. The surrounding ensemble—a badass group of super-powered knights called the Mosak—venture into a hellish factory burg to rescue a fallen peer, Jevalia, from their previous adventure. James Harren (Rumble) takes on guest art, injecting an exaggerated, kinetic energy in contrast to series artist Jerome Opeña’s more realistic portrayals. His design for a new foe who literally and metaphorically sucks the souls of the working class is especially delicious. Sean Edgar 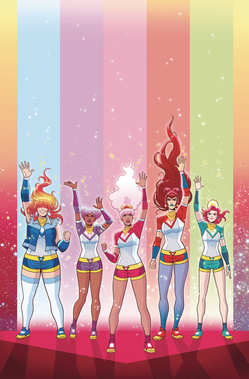 Magical girl series Zodiac Starforce was a 2015 favorite, tapping into a generation of comic readers who grew up more informed by Sailor Moon than by Deadpool. Artist Paulina Ganucheau’s tight linework, diverse character designs and body shapes and writer Kevin Panetta’s nuanced characterization helped make the series a hit among readers of Lumberjanes and Giant Days. Now that the girls have dealt with a former member’s turn to evil, a new monster-of-the-week foe has arrived in town. Like Buffy the Vampire Slayer with matching costumes and fewer problematic elements, Zodiac Starforce relays characterization through action and presents an inclusive message of empowerment and costumed butt-kicking. Steve Foxe