This September, Cup Noodles announced that it had gone the way of Kraft Macaroni and Cheese: Subtly swapping out its MSG (dare we say the ingredient that makes Cup Noodle so famous) and artificial colors for more natural alternatives.

Celebrating the 45th birthday of Cup Noodles, Nissin Foods USA decided to give its dorm-room famous product an ingredient facelift.

The changes: All soup flavors got a reduction of sodium by 15- 20 percent and MSG was removed. Soy sauce, tomato and red chili pepper all have naturally occurring glutamates and are still included in the recipe. All artificial flavors were also removed and replaced with natural alternatives to add flavor and color, include turmeric, paprika and lime.

The lower sodium Cup Noodles rolled out to shelves this fall (though plenty of stores still have backstock of the old version) but the advertising campaign (Cup Noodles’ first in the U.S.) for the new and improved Cup Noodles doesn’t debut until later this month. The MSG-free Cup Noodles has been lurking on supermarket shelves on the down low for about a month now, so I put the old and new version to the test to see if there really is a difference.

The new Cup Noodles are hardly incognito — the packaging is brighter and an MSG-free logo advertises the change. However, it’s fair to assume that a good amount of people grabbing a Styrofoam cup of dehydrated noodles, vegetable kernels and powdered broth to be prepared in a microwave in under five minutes may not spend the time reading the nutrition facts of their preferred flavor of Cup Noodles, which, in my case, was chicken. 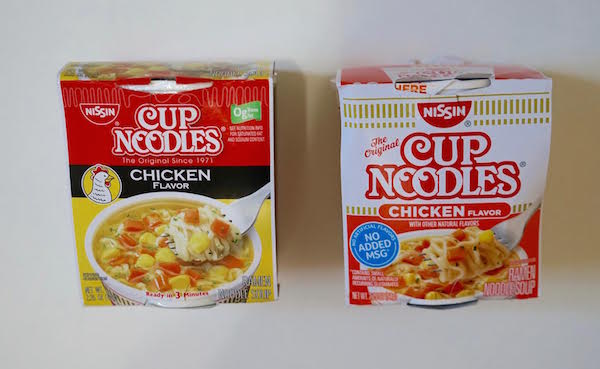 The first notable difference between the two varieties is that the new version has 10 more calories. If you’re eating a meal, or probably nutritionally worse, a snack, of Cup Noodles, worrying about 10 calories is just frivolous, but still, why add on any extra calories to a Styrofoam-packaged meal that’s pretty much devoid of all nutritional value? Both versions had 100 calories from fat, 11 grams of fat and 2 grams of sugar. However, while the old version had 7 grams of protein and 15 percent of your daily recommended Vitamin A, the new Cup Noodles has only 6 grams of protein and 8 percent of Vitamin A. On the upside, it also has an extra gram of fiber (3 grams), 2 percent Vitamin C (as compared to none) and, get this, only 45 percent of your daily recommended dose of sodium, as opposed to its older sibling’s 60 percent. That’s 1430 milligrams vs. 1070, so still, the reformulated Cup Noodles is nowhere close to a low-sodium food.

Ingredients-wise, while we’re taught to look for shorter ingredients lists, both Cup Noodles ingredient lists looked equally long. Powdered chicken, rendered chicken fat, hydrolyzed corn and soy protein and other equally dubious ingredients are in both versions, and while theses are all derived naturally, don’t kid yourself into believing the new Cup Noodles are remotely like anything you can find in nature. Most notably, in place of the monosodium glutamate on the new label is concentrated green cabbage juice, which, along with perhaps dried carrot flake, is the most natural sounding ingredient on the menu, and probably a better way to add saltiness than MSG. 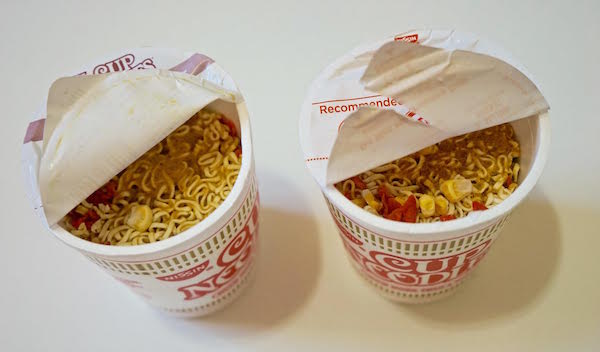 Both packages looked almost identical inside and had the exact same cooking instructions. I boiled water, let the noodles steep and then blind tested each version. While Cup Noodles’ new formula was designed to be indistinguishable, a side by side comparison proved that even blindly, it’s obvious that the new cup has less sodium. Each bite of flat noodles tasted more flavorful and more like legitimate chicken soup rather than the old version which tasted more like licking your fingers after sticking them into the bottom of a bag of pretzels. Still, even the new version could be considered salty and I enjoyed it more after diluting it with an ice cube. The MSG-packed cup went in the trash, where it belonged.

Melissa Kravitz is a writer living in New York. Follow her at @melissabethk.