After one bite of a rib eye steak that had been served to me on a sizzling Himalayan pink salt block, an internal dilemma surfaced: I wasn’t sure if I could ever be satisfied with a steak prepared in any other way, ever again. With an incredibly flavorful saltiness on the seared sides of the steak and a juicy center, it became clear that I’d simply have to learn how to cook a steak like this on my own.

Himalayan salt blocks, along with plates, bricks and platters, have a wide variety of usages including: sautéing, grilling, chilling, curing, baking, presenting and of course, salting. For those of us who aren’t skilled chefs, utilizing a Himalayan pink salt block may seem intimidating. So to demystify the salt block we’re talking to David Costa, head chef at Adega Restaurant, and Mark Bitterman, an expert on craft salt, otherwise known as a “Selmelier.” Think: wine sommelier, but for salt.

So why has salt block cooking become such a trend recently? “Is it a gimmick? Or does it actually make food better?” says Bitterman. “It’s both. Cooking with a salt block is a very cool, rad thing — it’s showy. I embrace it, not deny it. On the flip side, it does make your food taste really good.”

“Cooking on a Salt Rock is a different and unique way of preparing a rib eye steak. It serves two purposes: it impregnates a mild mineral flavor to the meat that it is harder to achieve by simply adding salt over the rib eye,” says chef Costa. “It also offers a beautiful presentation while keeping the cut of meat at a warmer temperature on the plate.” 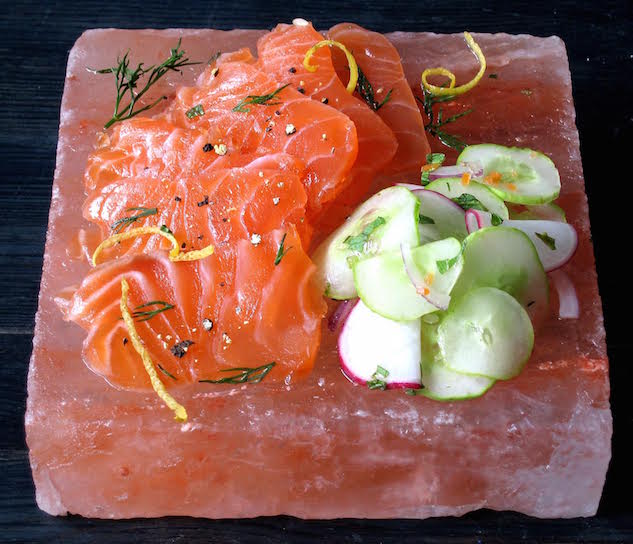 Photo courtesy of Salt Block Cooking
Himalayan salt blocks have an extremely low amount of porosity and very little residual moisture, which allows the salt blocks to be safely heated or chilled to extremes. What does this mean? One, the surface area touching your food is minimal, so your final product won’t be overwhelmed with salt. And two, the block’s minerals will result in a bolder taste, adding more flavor complexity to your food.

Basically, the salt comes in contact with the food and breaks down proteins, all while developing flavor. First, you have heat combined with the salt’s chemical reaction with the food to enhance flavor. This results in a breakdown of cell membranes, which in turn draws out the moisture out of the meat. It’s this denaturation of the protein that ultimately concentrates the flavors in your meat. By doing so, you get a nice, chewy crust on outsides of the food 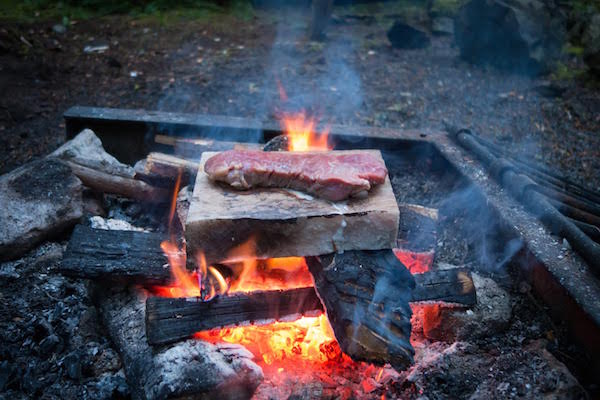 Photo courtesy of Salt Block Grilling by Mark Bitterman
Temperature is key when it comes to cooking on a salt block. “The hotter the block, the more of a sear it will give your meat. Duck breast doesn’t have to as hot, due to its fat content, but steak or fish needs to 500 degrees or more,” says Bitterman. “The number one failure when amateurs use a salt block? Not getting the block hot enough.”

“Most importantly is controlling the temperature as the salt rock keeps heat for a prolonged period of time,” says chef Costa in agreement. “Overcooking the meat is always a dangerous outcome and knowing when to apply and remove it from the heat source is the key to a successful dish.”

Sprinkle Test: Sprinkle a few drops of water on the block. If they sizzle vigorously and disappear immediately, the block is ready.
Hand Test: Hold your hand two or three inches above the block. If you can’t keep it there more than 5 seconds, it’s hot enough. 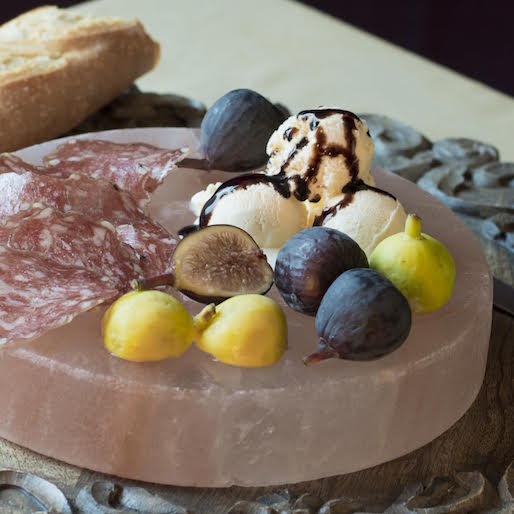 Photo courtesy of Salt Block Cooking
Here’s the thing: you don’t have to be an Iron Chef or master griller to reap the benefits of a salt block. These pink beauties are fabulous for serving. An easy recipe that Bitterman loves is a simple watermelon, feta and mint salad. “The salt works its way into the watermelon giving it a vibrant flavor. It’s a beautiful way to serve something.” Another favorite of his? Pizza on the salt block using a charcoal grill. Once the block is hot, throw the pizza dough on there for a minute, flip it over, pile on your ingredients (uncooked side down) for two minutes. There you have New York-level delicious pizza.

Now, if the whole cooking endeavor is too much for you in any capacity, have no fear. Check out Root 7’s Himalayan salt shots which are perfect for taking some next-level tequila shots to get the party started. Instead of the usual licking the salt off back of your hand, now you can enjoy a sophisticated and subtle crystallized salty aftertaste.

The easiest part? Cleanup. Once your board is cool, moisten a sponge, and without soap simple scrub the board down. Once all the food scraps are gone, wipe clean with dry towel and you’re all done. Same goes for shot glasses. Cleaning dishes has never been so easy.

Hailing from California, Chelsea Davis is an inquisitive dessert enthusiast and Golden State Warriors fan. Since graduating from Columbia University, she has amassed a colorful professional background, with experiences in industries that include news production, radio, public relations & media communications. Upon realizing that her true passion revolves around traveling the world, immersing herself in new cultures and eating, she is now a full-time freelance journalist, based in New York City. Chelsea’s work has been featured on Thrillist, The Daily Meal, Yahoo! and MSN, among other nationally recognized outlets. Follow her on Instagram and her blog .