Author Laini Taylor wrote, “Cake for later, cake as a way of life,” but when you are traveling as a person allergic to gluten and dairy, finding cake becomes more like wishful thinking. London is known for some very glutenful food, from fish and chips to sausage and gravy, so it wasn’t a place I expected to find gluten-free cake readily available, but I was delightfully surprised.

London is catching up quickly in the gluten-free game, and for good reason: according to Coeliacs UK, “Celiac disease affects at least one in one hundred people in the UK and Europe, and only about 24 percent of people with the condition are clinically diagnosed.” London has a ways to go when it comes to 100 percent gluten-free kitchens, but it is now possible to even find gluten-free fish and chips at spots such as Brockley’s Rock in southeast London, which serves gluten-free on Tuesdays. Lovely organic shops carrying gluten-free and vegan products are popping up; almond milk is easily accessible at coffee shops in areas such as Shoreditch, and with a little hunting, there is nothing keeping you from eating gluten-free vegan cake for breakfast every morning. Visit these three spots for maximum fluffy cake deliciousness when in London. 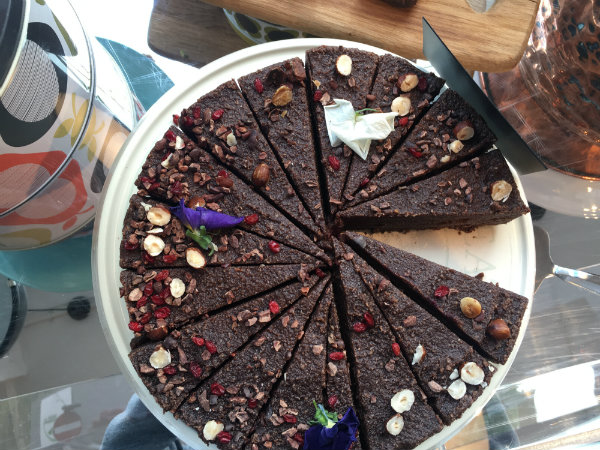 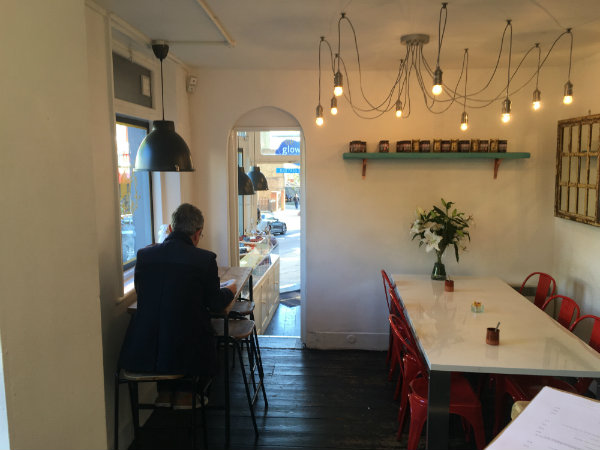 Still puffy-faced from my flight a couple hours before, my best friend led me across the edge of Hampstead Heath, and into what she described as her favorite cafe in all of London. Sure, walking into a gluten-free spot immediately after arriving hungry in a foreign country was going to make a good impression, but this little cafe was different; it felt like home. The décor was simple, rustic, sunny and open. Orchids in tiny vases sat on the window sill, and decadent raw organic cakes, donuts, and other confections filled the big picture window, while layered salads in jars lined the refrigerated shelves. The café-eatery’s motto is “Eat No Evil,” and the ceramic monkey on the windowsill is a humorous touch by Sonia and Hayet, the two French sisters who have developed a sweet and savory menu free from refined sugars and other chemical additives. 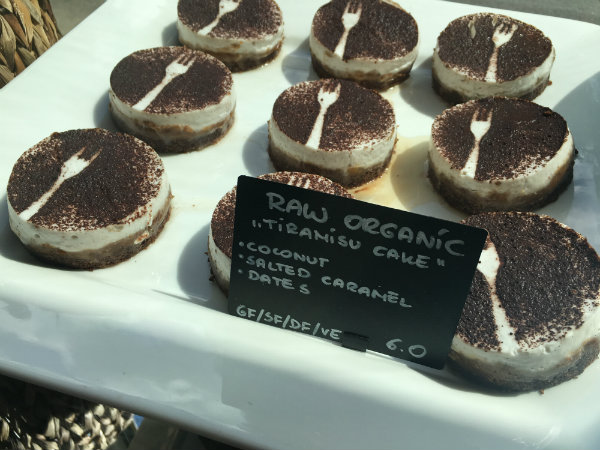 The service was amazing; after mentioning that I was reminded of my favorite café in Los Angeles, Sqirl, and chatting about their turmeric tonic, Sonia disappeared into the kitchen and reappeared with her own tonic for us to taste test! Aptly enough, while we sat there enjoying raw pistachio donuts and a tiramisu cake made of coconut cream, vegan salted caramel, and dates, the Queen passed by in an escorted black car: best welcome to England I’ve ever received. Side note: the gluten-free bread they have available to go with menu items such as the shakshuka is some of the thickest, doughiest, and best gluten-free bread I’ve ever had. 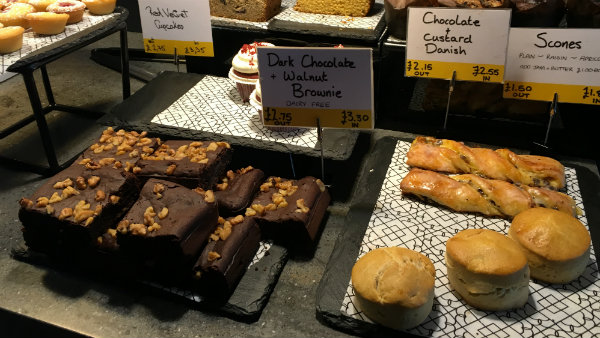 On our way to see People Places & Things in the West End, we stopped in Soho for coffee, and made it into Beyond Bread just before they closed (actually, just after — they were so kind!). Everything was 100 percent gluten-free. Overwhelmed by our options, my lactose intolerance became the deciding factor, and we chose a sumptuous vegan chocolate and walnut brownie along with a luscious vegan chocolate and raspberry cake. With their full range menu of muffins, breads, toasties and sandwiches, the bakery seemed to be a lunchtime hot spot for the area. I couldn’t help but think that if I were in London longer, this place would be a grab and go godsend.

There are two Grill Market locations, one in Holburn and one in Chelsea. Neither location is 100 percent gluten-free or vegan, but they certainly have plenty of options. I was grabbing a quick bite before catching a train to the Lake District and my friend recommended the market based on their Instagram (which really is a work of art that will make you so hungry!).

I tried a Thai soup, a turmeric latte made with coconut milk, and a lemon polenta cake. All were super tasty and exactly what I needed to tide me over on my four-hour train journey. The Chelsea location has sugar-free gluten-free protein pancakes, which are of course at the top of my list to try next time. Hopefully in the future, they’ll have more items that are both gluten- and dairy-free, as there didn’t seem to be many options with that overlap, but still, I’d be a regular here, and they do have cake, which is the most important factor in judging any restaurant or cafe, of course.

Lydia Bottom is a writer, actor and occasional painter who has lived on all four American coasts, but now lives in Brooklyn. Tweet her at @LydiaBottom.