Afternoon darkness has descended over the northern hemisphere. The radiators have kicked on. One thing is certain: we now find ourselves fully and undeniably in root vegetable season. I find that roasting a big pan of tubers and herbs until they’re soft and comforting is one of winter’s simple pleasures. There are endless possible combinations for a hearty root roast, so I’m rounding up some of the heavy hitters for inspection and elucidation.

The word “tuber,” by the way, is derived from an Indo-European root word meaning “to swell,” which seems apt and also vaguely lecherous. These subterranean starch storage organs aren’t just sexy and delicious — they may have played a role in human evolution. According to chemist and food historian Harold McGee, people turned to edible roots when the climate of the African savanna cooled two million years ago, making fruit scarce. Nutritionally superior tubers might have give an advantage to the early humans who learned to dig them up and roast them over a fire.

Whichever root vegetables you choose to chop up for your next roast, it’s hard to beat the satisfaction that come with pulling a steaming pan of subterranean sensuality out of the oven. In that moment, we can thank our early human ancestors and the legions of farmers, traders and radish carvers that made us the strange, tuber-eating species we are today.

Without further ado, the tubers in question: 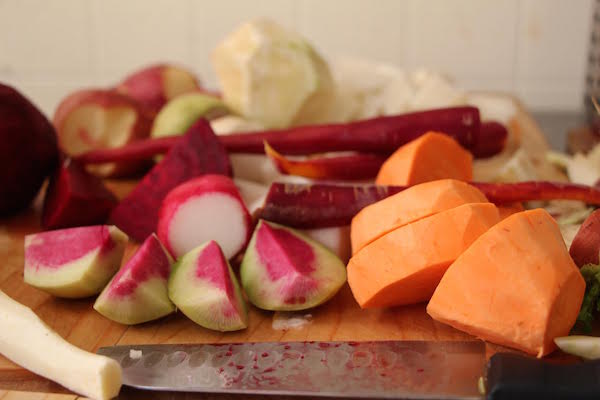 7. Parsnips
It feels unfair to put the parsnip in seventh place, but the last time I included parsnips in a vegetable roast, I ended up regretting it. Like a loud-mouthed albino carrot, the parsnip can be overpoweringly sweet and almost floral. It’s also starchier than its carrot brethren, and can get a bit mealy during a long roast. Parsnips are perhaps best suited to a dish of their own rather than competing with other tubers. In the 17th century, noted philosopher and cookery fan Sir Kenelm Digby wrote a recipe for a milk-rich parsnip pudding. Maybe I’ll try that next.

6. Potatoes
I’m not here to knock the stalwart potato. Indigenous to cool, wet regions of South and Central America and cultivated as long as 8,000 years ago, potatoes were brought to Europe by Spanish explorers in the 16th century. As they were easy to grow, potatoes quickly became a cheap staple of peasant diets across the continent. Dependance on the crop would of course prove disastrous in the wake of the 1845 potato blight in Ireland. Which is to say, potatoes didn’t go through all that just to snarked at in a listicle. I honor the potato, and while it’s true that fingerlings roasted with rosemary and garlic are delectable, potatoes are bland almost by definition and they rarely manage to be the superstars of the roasting tray.

5. Carrots
Carrots can be an excellent addition to a tuber medley. Much like potatoes, though, they aren’t the belle of the ball. Perhaps it’s the familiarity. The cultivated carrot originated in Central Asia and made its way into sweet and savory dishes from Afghanistan to Switzerland during the classical and middle ages. Sadly, it’s not true that eating the bright taproot can improve night vision. This myth finds its origin with the U.K. Ministry of Food during World War II. In an effort to increase locally grown carrot consumption among civilians, the ministry created a propaganda campaign that claimed the carrot-rich diet of British Air Force pilots helped them succeed in night missions. The beta-carotene in carrots aids the body in making vitamin A, which is crucial to eye health, but it only really improves vision in people who already have impairments from a vitamin A deficiency. Roasted carrots take on a sweet, caramelized delightfulness, but they cannot bestow superhuman night vision.

4. Celeriac
Too often passed over for its hobgoblin-esque appearance, celeriac can be a real treat with some TLC and a sharp kitchen knife. It tastes like celery — in fact, it’s part of the main stem of a variety of celery, though not the one from which we get commercial celery stalks — but is firm and starchy rather than fibrous. Celeriac balances out some of the sweeter beet, carrot, and parsnip flavors in the vegetable tray.

3. Sunchokes
The sunchoke, which goes by many names — Jerusalem artichoke, sunroot, earth apple — is the tuber of a small North American sunflower and a member of the lettuce family. When roasted, it becomes supple, nutty, and a slightly sweet. Be careful, though. Too many sunchokes can can make for a very gassy night. There’s a story in my family about the time my mother cooked a huge tray of sunchokes for dinner before we all boarded a cross-country redeye flight. Needless to say, my parents, sisters, and I arrived on the East Coast the next morning having each survived an extraordinary intestinal odyssey. It turns out there’s a scientific reason for our discomfort. According to McGee, humans don’t possess the necessary enzymes to digest the fructose chains in sunchokes. Instead, bacteria in our intestines break them down, producing carbon dioxide and other gases in the process. So, you know, watch your dosage.

2. Radishes
While delightfully crisp and spicy both raw and pickled, I believe radishes of various varieties — red, black, watermelon, daikon — truly shine in the roasting pan. Their bite, acrid to some, softens to a milder peppery undertone. A native of western Asia, radishes crop up in stories and folk art all over the world. In Oaxaca, Mexico, residents celebrate Noche de Rabanos (Night of the Radishes) every December 23rd. Hundreds of artisans compete in a radish carving competition, fashioning elaborate figures and scenes from the largest radishes available.

1. Beets
Beets take SO LONG to cook, but they’re oh so worth it. Yes they’re addictive and candy-sweet, but it’s the earthy notes that really make the beet special. It was long believed that soil microbes give beets their distinct aroma, but it turns out that the flavor comes from an earth-smelling molecule produced within the root vegetable. Also notable for the “oh shit there’s blood in my urine, no wait I had beets” effect, this is a tuber that keeps you on your toes.

Molly Jean Bennett is a writer and multimedia producer based in New York City. Her essays, poems, and strongly worded letters have appeared in McSweeney’s Internet Tendency, Atlas Obscura, VICE, and elsewhere. Her chapbook Paper Apartment is out now from Essay Press. Follow her on Twitter at @MollyJeanBee.