Actual Sunlight is a game by Will O’Neill and constructed in RPG Maker VX Ace. I mention the engine it is constructed in not to slander the game (as there’s a healthy culture of that around RPG Maker games), but rather to point out that the game creation tool has a number of affordances that are important to take into account. RPG Maker is good at two things: displaying text and giving you a top-down view of the world. Both of these strengths exist because the system was developed in order to facilitate the creation of Super Nintendo-style Japanese role playing games, and O’Neill leverages this in his design.

We begin by embodying Evan Winter from a distance. Walking around his apartment and inspecting each item there gives way to long treatises of text. Sometimes these exist in the form of a transcript of Winter’s psychiatric appointments. Sometimes they are angry prose, and other times we’re given a laugh-track induced transcription of a late-night television show appearance. All the while, we’re high above, looking at Evan as an object in a world of other objects, moving around much like all of the nonplayer characters do. 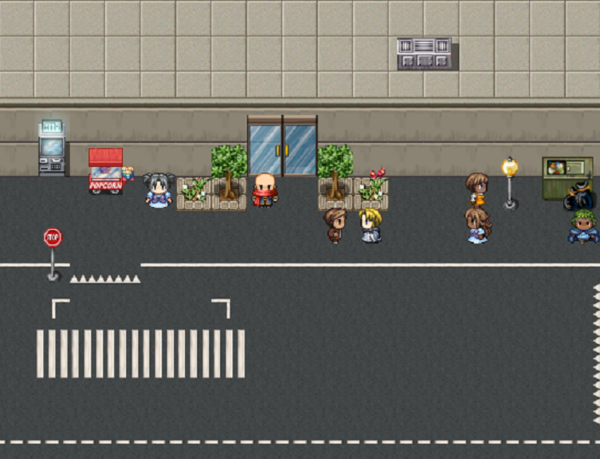 This, I think, is the strength of Actual Sunlight: We see Evan at a distance while becoming intimately close with him. In another context, Evan writes about “being something but not being a part of it,” and that is the player’s relationship to the downward spiraling cycle that leads Evan Winter to the conclusion of his story. We are a part of this world, but not of it; we are less acting players and more witnesses of something horrible and yet, somehow, seemingly necessary.

I’m alluding to “something horrible,” but the reality of it is this: The game follows a character with constant thoughts of suicide who eventually acts on those thoughts. O’Neill doesn’t attempt to hide this fact from the player, and in fact addresses the plot (and the player) in a longform text passage early in the game where he warns against suicide as a solution, especially for the young. “This game is not a game,” he writes, “it’s a portrait,” and it is a portrait that takes us beyond the pale of the normal narratives of depression. There is no getting better. There is merely dealing with the shape of things.

Distance and closeness. Living and wanting to die. Sociality without wanting to be social. These are the not-quite dyads that flow through Actual Sunlight’s backstory delivered in the present, full of fleshed-out characterization, told through transcribed documents scattered and associated with different locations; it is, in a strange way, closer to Bioshock than most other contemporary narrative games. However, it shows us a way out of that paradigm as well — these are not tacked-on or extra, but instead they deliver the whole world to us, showing that narrative interludes in games might work better when they are not interludes at all, but rather complete and total embraces of pure narrative in an interactive space.

In the end, Actual Sunlight portrays a nuanced understanding of depression and what it means to live in the contemporary world in a particular subject position. Sometimes beautiful, always tragic, the game delivers everything it promises and more.

Actual Sunlight was developed by Will O’Neill. It is available on PC.

Cameron Kunzelman thinks about Gamma World at @ckunzelman and writes about games at thiscageisworms.com.