It’s only fitting that there’s a winking joke about Rocksteady’s blockbuster Batman: Arkham City not ten minutes into Lego Batman 2: DC Super Heroes. It was to be expected, given the way Warner Bros. parodied Arkham City’s ad campaign in the lead-up to their latest Lego sequel. But Lego Batman 2 doesn’t just pay homage to Arkham City with these goofy nods. Strangely enough, it also mirrors Arkham City’s design in a few key ways—and just as in Rocksteady’s game, those decisions aren’t always successful.

Naturally, Lego Batman 2 retains all the hallmarks of developer Traveler’s Tales’ previous Lego games. Playing through the 15-mission story campaign either solo or with drop-in, drop-out co-op, you’ll solve puzzles using multiple characters, defeat bosses and smash hundreds of Lego objects. Completing story missions unlocks Free Play mode, which allows you to go back into levels to collect minikits, gather studs (the default currency of Legoland) and rescue citizens in peril. As in the first Lego Batman, Batman and Robin can don different suits to open up new abilities. As you collect characters, you’ll be able to substitute them for the Dynamic Duo, and some (like Green Lantern) have unique powers not found in any other character. The compulsion to collect is alive and well here.

Much has been made about one major change to the formula: the addition of voice acting, a first for the Lego franchise. The script is executed perfectly competently, with the slapstick campiness you’d expect from a Lego superhero story. It’s a testament to the storytelling’s success, I suppose, that I soon forgot there was anything different about it.

But the bigger addition to the formula is the first true open world in a Lego title. While previous games flirted with pseudo-sandboxes, Lego Batman 2 offers a massive Gotham City to explore between story missions. The map is packed with things to do and find: red bricks that enable cheats, gold bricks that serve as a form of currency, citizens in peril to rescue, boss villains to defeat and vehicle races to win. This hub world is a far cry from the comparatively tiny University of Lego Indiana Jones or Hogwarts of Lego Harry Potter. It feels a lot more like Arkham City, in terms of both scope and variety.

Yet this is where Lego Batman 2, like Arkham City, begins to falter. There are so many things to do that it becomes difficult to prioritize, or even understand, the available activities. This tension is common to open-world games, which often try to alleviate frustration with detailed mini-maps and lists of objectives. But it’s much more pronounced here, especially before you’ve completed the story, because Lego Batman 2 does such a poor job of explaining what you’re seeing and doing in the hub world. You have to discover how a few of its systems work through exploration and trial and error—an approach that might work well in Dark Souls but is immensely irritating here. Collection, not discovery, is the draw of a Lego game. 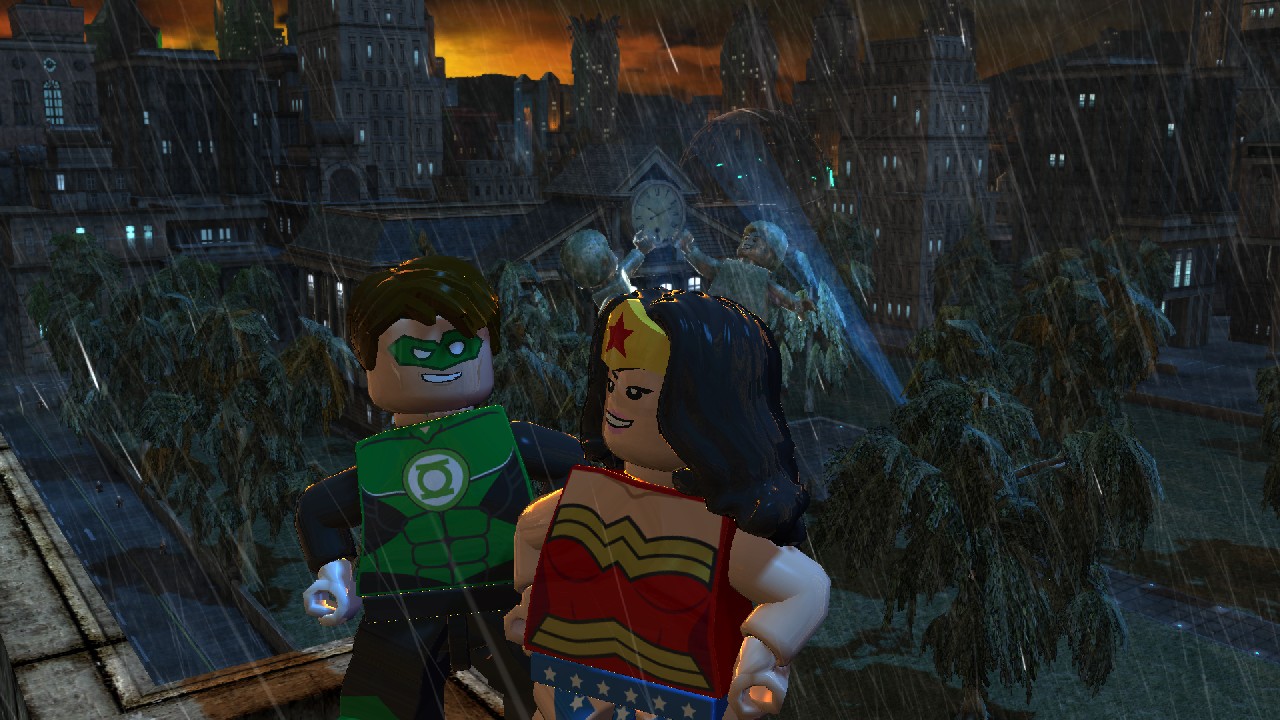 The map is the most egregious offender. Once you figure out that there are Bat-Computer nodes all over the city that can reveal portions of the map once unlocked, good luck figuring out what the symbols on the map mean. It’s strange that in a game that lets you unlock a blinking arrow to point you to secret items, it’s never explained that yellow dots on the map are gold bricks. Instead of a mini-map—which would be much more useful for navigating a city with tall buildings—Lego Batman 2 features a compass in the style of Skyrim or Red Dead Redemption. That’d be fine if the compass wasn’t filled with gobs of unexplained and confusing symbols not seen elsewhere. (It turns out most symbols refer to certain buildings, but it’s unclear why that’s useful or how you’re supposed to tell those aren’t objectives or characters.) This is especially problematic before you’ve finished the story, during the segments between missions when you have some access to the hub world but are inexplicably blocked off from certain areas. The map itself is densely packed with icons, all of which seem to be demanding your attention. Looking at it, you may begin to feel that this game, like Arkham City, suffers from serious bloating.

The story missions fare somewhat better. Most feature clever enough puzzles, but technical issues can hamper your enjoyment. As in other Lego games, the camera can be the most difficult obstacle; its zoom level varies wildly, and the splitscreen co-op—a feature I’ve disliked since it was first implemented in Lego Indiana Jones 2—wreaks havoc on viewing angles. I love to play Lego games cooperatively with my wife, but there were many times when one of us would have to drop out so the other could see better.

Speaking of seeing, you’ll want to crank up the brightness as soon as you start Lego Batman 2, because Gotham City is dark. As in Arkham City, quite a bit of detail has gone into painting the structures of Gotham and the lighting system is impressive, but the color palette is so gloomy that it can be difficult to distinguish Batman from the background. It’s also constantly raining, which might be thematically appropriate but is irritating in practice. All these visual effects (particularly in splitscreen play) really tax the game’s engine, slowing the framerate to a plodding crawl when there are lots of objects on screen. Other bugs manifested as well; I experienced multiple crashes on the Xbox 360, and at one point my character inexplicably morphed into a giant purple cube.

Despite these significant issues, there’s a part of me that would love to see Traveler’s Tales do a Lego Superman game. The way I played this game, it really should have been titled that—Superman is easily the most fun character to play, given his range of abilities and how neat it is to fly around Gotham to the strains of John Williams’ theme. But I would like to see the developers improve the flight controls first. For such powerful beings, Clark and his flying friends have some issues going straight up.

For better and worse, Lego Batman 2 is probably the most ambitious entry in the Lego franchise. The game walks a bizarre line between assisting and frustrating the player, and it’s easy to get the sense Traveler’s Tales might have overreached somewhat. Yet it also feels like a first step into a new and potentially exciting direction for the Lego franchise.

Lego Batman 2: DC Super Heroes was developed by Traveler’s Tales and published by Warner Brothers Interactive Entertainment. Our review is based on the Xbox 360 version. It is also available for the PlayStation 3, Nintendo Wii, PC, PlayStation Vita, Nintendo DS and Nintendo 3DS.

J.P. Grant is a Boston-based freelance writer whose work has appeared in Kill Screen, Gamers With Jobs, and other outlets. He blogs about games at Infinite Lag and is also on Twitter.