I had everything I wanted to say wrapped up with a nice little bow until I spent more than an hour working on the final boss of Bound By Flame on the lowest difficulty setting.

Before that moment (or that excruciating set of moments), I thought that Bound By Flame was yet another entry in what is fast becoming my favorite genre of videogame: “game that doesn’t know what it is.” The last major player in the genre, Remember Me, was one of my favorite games of 2013, and I spent most of my play-through of Bound By Flame comparing the two. Like Remember Me, I knew almost nothing about Bound By Flame going into it other than it was ostensibly some kind of action game in a fantasy world. It is also like Remember Me in that I had no idea what I was doing for a long time before sort of settling into a series of dos and don’ts that seemed to carry me somewhere.

If I had to sum up Bound By Flame in a single sentiment, that would be it. The game is about moving forward, getting by, and progressing along developed pathways. This means that there is a very linear progression of skills for my warrior, a number of “zones” that I move through, and some incredibly worn “mature fantasy” tropes that are taken to their logical and apparent conclusions. The kicker is that all of this is delivered in a package that is so clearly trying to be the opposite of these things. I could tell while playing that the developers want the game to be huge and expansive, that they want me to romance other characters, and that they really do want character- and plot-altering events to resonate with me in some way somehow beyond what a game like Mass Effect is able to achieve.

The problem is that it all falls flat. I’ll be honest and say that the game plays and feels like someone had a really great time with The Witcher 2 and decided to mimic that model for all it is worth. Don’t get me wrong—Bound By Flame is a really good The Witcher-like, but it lacks the well-balanced mixture of tropes, gritty realism and vibrancy that makes Geralt’s world come to life. Instead, we end up with a dazzlingly boring setup for the fiction of the game (there are Ice Lords, aka evil wizards, who have raised an army of the dead and have killed/are killing most people) in which the player is a mercenary possessed by a fire demon who is itching to get revenge on some Ice Lords. Revenge is had—that’s the game.

My actual time in the game was spent doing one of three things. One: talking to people and solving some (but not most) quests that way. Two: spending an inordinate amount of time getting from point A to point B in various locations. Three: fighting. This third thing is what I spent most of my time doing, and it is hard. I mean, it is super difficult. I cannot stress this enough. There were some regular, run-of-the-mill encounters that I had to attempt more than ten times in order to figure out how to mix my light, fast attacks (part of the Ranger skill tree) and my slower, blocking-heavy attacks (the Warrior tree) in order to simply make it through the fight. It took everything I had in order to merely survive lots of fights in this game, and I have no idea the kind of Herculean skill it might take to actually thrive here. 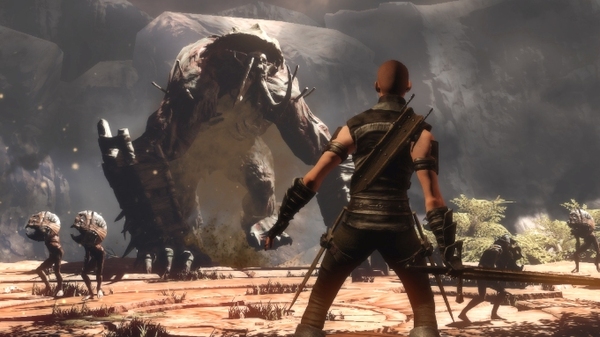 So Bound By Flame is clearly a Witcher-like, but that “like” is important, because it isn’t a clone. It also isn’t really in the Mass Effect line of games, despite clearly borrowing from that lineage. It also isn’t a God of War brawler, despite sharing the open floor plans, melee combat and enemy mixtures that those types of games developed as their core game content. Instead of being any one of these things, it is a mixture of all of them, and that gives it charm. The longer I played the game, the more I was invested. I did some side quests for story instead of experience. Instead of running at full speed through all of the town locations, I actually talked to NPCs and tried to get a lay of the land. I laughed out loud at a quest (the Traitor quest, if you’re curious).

Despite the fantasy tropes and the frustrating, often unfair-feeling combat, by the time I reached the final battle I was a fan. I thought that the game shared some of the quirks and strangeness of something like Deadly Premonition, being just as much a love letter to videogames as it is a product. Bound By Flame had won me over.

Then I spent more than an hour attempting to defeat the most frustrating final boss battle of any game in recent memory. It is a cyclical fight where the cycles become time based, and the longer I take, the faster things get. The enemy is just straight-up better than I am, and slowly-but-surely it whittled me down. Giving up on attempting to skillfully progress through this part of the game, I just figured out how to brute force it by planting traps at the feet of the enemy over and over again until the fight phase changed and I was able to heal myself. It was a nightmare.

And it was during that agonizing long dark midday of the soul in which I thought I might be all wrong about Bound By Flame. Maybe what I thought was charm was just the onset of videogame Stockholm syndrome where my resolve to not be destroyed was turning into an eerie fascination. I can’t really say, but I do know that there is a strange semiprecious stone of a game here. Despite all of the problems I’ve laid out, I think there’s something genuinely interesting inside of Bound By Flame. It is weird, prickly and smooth in equal measure, and I think the average player who isn’t prepared for the strange challenge might be pushed out too quickly; on the other hand, the player who fully commits will also, inevitably, be rejected and found wanting. There’s something strange and magical and brave about that design decision.

Bound By Flame was developed by Spiders and published by Focus Home Entertainment. It is available for Playstation 3, Playstation 4, Xbox 360 and PC.

Cameron Kunzelman tweets at @ckunzelman and writes about games at thiscageisworms.com.