The camera is a robot that can kill you. A week after a visit to the UK headquarters of Guitar Hero Live designers FreeStyle Games, that sticks out more than anything else I learned about the game, or even England.

Normally when you make a game you don’t have to use a potentially lethal robot camera. You usually don’t need a real camera at all. When tasked with bringing the once-popular series back from the dead after a five-year absence, FreeStyle decided to ditch the cartoonish graphics of old and go with a full motion video approach that puts the player on stage with the band. As you riff along to the Black Keys or Fall Out Boy you’ll share satisfied nods with your band mates and gaze out at a massive crowd singing along to every word. The people on screen are played by real people: the bands are made of real musicians cast to play prefab groups from various genres, and the audience members are real fans of those genres recruited to make the concert footage look realistic. You’re never on screen, but you’re always at the center, with everybody looking at you and reacting to how well you play along with the song.

This was a huge change from how FreeStyle, a studio probably best known for the DJ Hero games, normally works. “We make games. We’ve never made films until now,” Jamie Jackson, FreeStyle’s creative director, said during a behind-the-scenes look at how they shot this video footage. The goal was to make the film look seamless, like a real person’s undivided field of vision as they romped on stage during a performance, while turning a small set with several dozen extras into concert footage that looked authentic. No easy task, but it wound up being even more complicated than FreeStyle expected.

The plan was to make the game look more human, but one of the biggest problems came from the human element. There were a few factors that made a real-life camera operator less than optimal for FreeStyle’s needs. Camera operators try to be invisible, but for Guitar Hero Live the operator had to effectively play a member of the band. They were an active part of a larger performance, and not merely a device used to capture it. Also the nature of the game required two different takes of every performance, one with a positive reaction from the crowd and one negative, and the camera motions had to sync up perfectly for both. Nobody could perform the exact motions over multiple takes as precisely as would be needed. 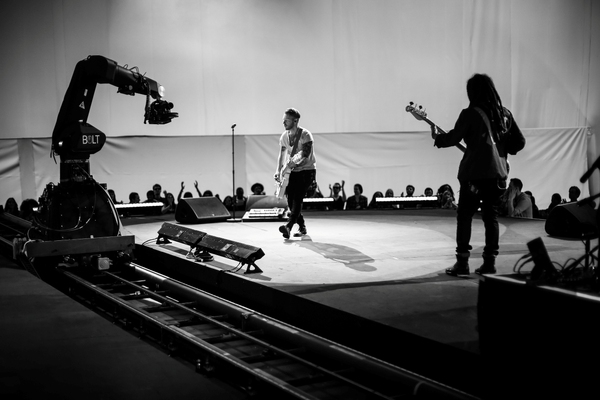 “What we’re going to do is to make live video adjust to your performance and the only way of doing that is to shoot more than one film and then switch between them,” producer Joel Davey said . “In order to achieve that effect we realized you can’t shoot an entire twelve-minute set handheld, and then shoot that exact same path again handheld so that the cuts between the two films don’t jar.”

So shooting the video footage couldn’t be as simple as strapping a camera to somebody and having them prowl around the stage. FreeStyle looked to motion control cameras to solve this problem, eventually settling on a device called the Bolt, “an amazing rig that’s actually adapted from the car manufacturing industry,” Davey said. For the Bolt to run they had to install 30 meters of track on the stage, and had to cut a groove so it’d be the right height for a human viewpoint.

FreeStyle couldn’t completely discard the human touch, though. They used a live camera operator to create the data that would guide the Bolt. He’d walk around the stage while the cobbled-together band pantomimed a performance, and his motions would then be flawlessly replicated by the Bolt as many times as needed.

The danger came with the speed, power and torque of the Bolt. It can slide across that track at great speeds, and despite weighing in at over a ton it is remarkably fast and nimble. It can also twirl around at 180 degrees in a snap. If a musician or crew member was out of position they easily could’ve been run over or walloped by the rig. Fortunately there were no injuries on set. There was little danger as long as everybody’s movements were choreographed in time with the camera’s, but if you’re the paranoid sort or just have a weird mistrust of machines you’d maybe think twice before sharing a stage with this camera. 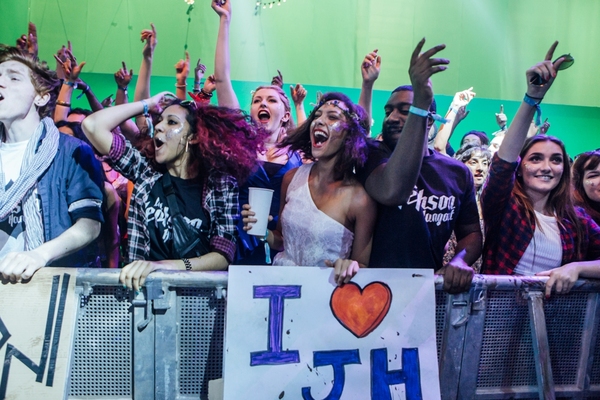 Another problem arose with the extras used in the audience. The first rule of being an extra on a film shoot is to never look directly into the camera. The whole point of this game’s presentation is that the player is the camera, though. FreeStyle needed every extra to stare directly into the camera pretty much at all times. “When we got ‘em we were like, ‘Okay! LOOK AT THE CAMERA!’ and it took them so long to get out of their natural habitat of not looking at the camera,” Jackson said.

To remind the extras that this giant robot camera swinging across the stage was a stand-in for the player, and thus the proper recipient of all their rock fan adulation, FreeStyle had to humanize the machine. They named it Penelope, stuck a smiley face to it and repeatedly instructed the actors to stare directly into it. During the negative takes, when the audience was supposed to grimace or wince at the player’s bad performance, they’d flip the smile upside down and make Penelope look unhappy. It might sound like something out of pre-school, but visual cues like these coaxed convincing reactions out of the crowd.

When you play the game those crowds will look massive, depending on the venue for that song. Sometimes it’ll be a mob of thousands at a downtown city rock festival, and on other songs it’ll be tens of thousands more on a massive field in rural England. Almost every one of these scenes was shot in the same room with a green screen backdrop. Several dozen extras stood in for the first few rows of the audience, their clothes and hair styled perfectly for whatever genre of band was performing, and then copious amounts of digital effects created the rest of the audience and the intricate backgrounds. When playing the game you can’t begin to tell how much work went into creating this illusion—you’d think FreeStyle somehow got permission to drag cameras on stage during a festival like Glastonbury or Boston Calling and filmed a real audience. 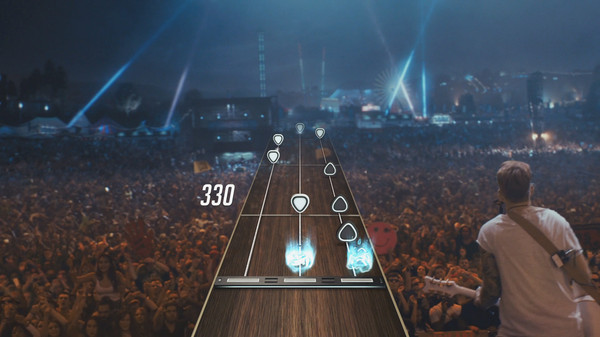 That commitment to verisimilitude extended to the fake bands created for the game. Every band has a name and an aesthetic that clearly ties them to a different style of rock music, and FreeStyle worked overtime to construct a backstory for these bands. They devised back catalogues for each group, complete with cover art, and even came up with romantic and personal relationships between members of different bands. They designed multiple t-shirts for every group so that you’d see different styles of shirts from different eras of the band in the audience. Multiple FreeStyle employees were wearing shirts for one Guitar Hero Live band known as Fight Hound.

“Trying to come up with an original name for a band is virtually impossible in today’s world,” [] said. “An original name that’s good is even harder. We spent a lot of time locked away in a room just brainstorming different names. ‘Name-storming,’ we called it. We came up with some real beauties that were already taken, like someone with 60 followers on Facebook.”

All this effort went into creating a world as fictional as any game’s but as familiar as any rock concert you’ve ever been to. Guitar Hero Live feels like a Coachella from a weird parallel universe, where you might know the songs, and the bands might look like ones you’d see in Paste or other music magazines, but where everything is just slightly off. There are different faces and different tattoos behind those all-leather get-ups. That might be Hayley Williams’ voice, but it’s coming out of somebody else’s body. And everybody is staring directly at you as you flail wildly at the plastic guitar’s six buttons, only it’s not really you they’re looking at, but a one-and-a-half ton camera whizzing around the stage. And the camera is a robot that can kill you.