Destiny is the game that should have won it all. It comes from one of the industry’s most successful developers, it has a massive budget, it has voice work from beloved actors like Nathan Fillion, Lance Reddick and Gina Torres, and it combines the hugely popular first-person shooter genre with the addicting properties of an MMO. Many expected this combo of World of Warcraft and Halo to give us a magical, free-roaming space baby that could snipe AND shoot death orbs from its fun little hands. For a time it was a smash and dominated the multiplayer market, but after a few lackluster expansions and several months without any new substantial updates the game has struggled to stay relevant. The next expansion, Rise of Iron, is still a couple of months away, but Bungie hopes it will bring back some of the players it lost before Destiny 2 comes out next year.

I can tell you as a previously faithful player that it’s not going to be an easy thing to find more time for Destiny now that Doom, Overwatch and Battleborn have hit the shelves, but it’s not entirely impossible. Bungie has a long-standing record of listening to its fans and their constant tweaking and nerfing of its system (and my beloved Hawkmoon) shows that they are still very much invested in retaining Destiny’s playerbase. Getting players re-invested after months of neglect will be tough, but here are a few things that could potentially win us back. 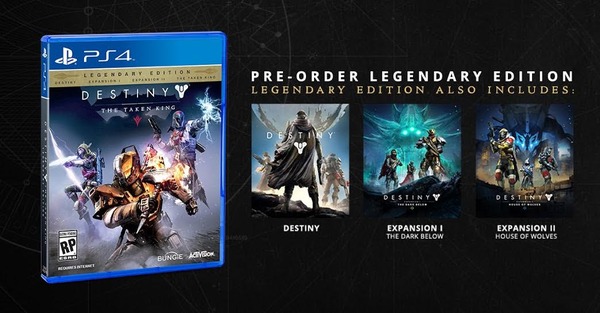 The number one reason Destiny has lost a lot of players to all the other games that have released since its last big expansion is time—specifically the time between releases where players had absolutely nothing to look forward to, nothing else to do in the game, and no reason to even sign in anymore. Paid expansions may not be ideal, but a steady stream of content releases are the only way that an MMO survives over time. That’s just a fact. Upscaling previous content helps, but a new release every quarter or so would keep the game afloat and keep players coming back for more. Even if it’s just a new strike in the playlist every month, it would be much better than a months-long drought full of nothing. 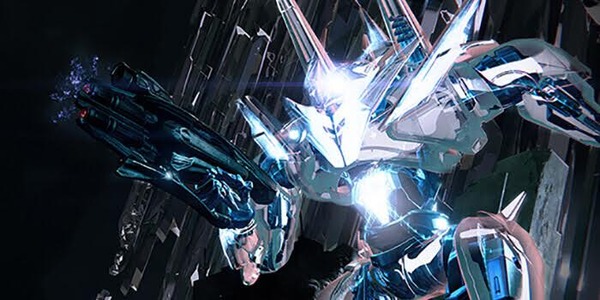 There’s no denying that the previous raids are some of the best designed and most fun parts of the Destiny experience. But that experience is only fun until you reach higher levels. Running The Vault of Glass now is a joke and Crota is hardly a challenge. If you want something up to par, you can only run the highest level and most recent raids released and it seems a shame that so much work would go into the others only to have them forgotten post-game. There should be a level slider that allows you to fight against Atheon or Crota at different difficulties with different reward tiers like everything else in the game. Otherwise, why keep them around?

Literally the most frustrating thing to see as a writer is a robust world of quality stories relegated to a website outside of the game itself. The game’s lore is contained in “grimoire” cards, which can only be accessed online or through an outside app, and not in the game itself, and that’s a horrible decision. Most players won’t be fascinated enough (or have enough time) to track down these stories to learn more about the deeper parts of the game. I can’t tell you how many times I’ve mentioned a piece of lore and my buddies have shrugged it off because they don’t want to get off of the game to read about it—they want to play the game and experience the lore at the same time. And the game’s writers, who have crafted some of the most interesting parts of this world, have their work sitting in a dark corner like they never wrote it at all. 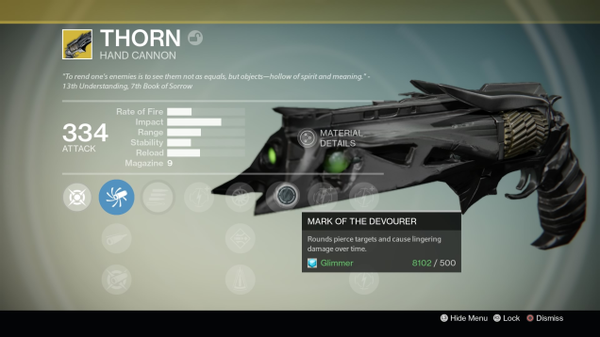 Midway through the games’ life Bungie was praising the positive feedback they received from their quest for the exotic handgun Thorn. It was a long venture that required time and skill to complete and the reward was well worth the grind. On top of that it was steeped in lore that for once was included in the game itself and that had players universally intrigued. Bungie stated they wanted more like that, but never delivered. Instead we got a bunch of short, time-gated quests that were just not up to snuff because they weren’t nearly as long and well thought out. It turns out players want to do meaningful tasks. Give me a reason to seek out these badass weapons and make me work for it. I promise, I’ll be grateful as long as you don’t nerf it right away. 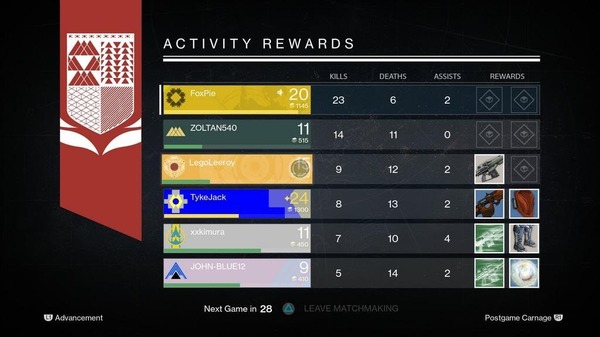 Anyone who has played any of Destiny’s PVP in the last two years has seen it—the top player wrecks the other team with a tremendous kill count, but they get nothing for it while the lowest performer gets a goddamn Gjallarhorn. It’s simply not fair, and though Bungie can argue that it makes it an even playing field, it removes the incentives for top tier players to even play in the first place. Instead, rewards should be based on how well you do and if you won the match. There should never be a question of why you didn’t get a reward for a victory or a stellar performance. That’s just a really stupid setup if you want to keep people feeling good about their work. 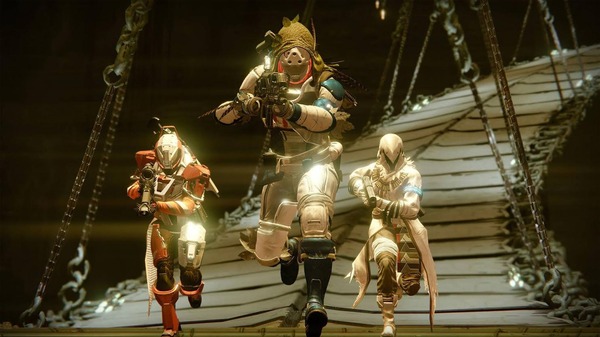 If you’re going to have matchmaking for PVP and you’re going to have matchmaking for small team multiplayer levels, then why wouldn’t you allow matchmaking for everything else? World of Warcraft has had loads of players running raids with pick-up groups successfully for a decade and you want to tell me that playing with random people will ruin the game experience? Learn from your business partner, Bungie, because that’s how lots of people meet in an MMO. And if a single player wants to complete a raid, but has nobody to play with, then you should be helping them get there—not forcing them to go to your website to beg for help. 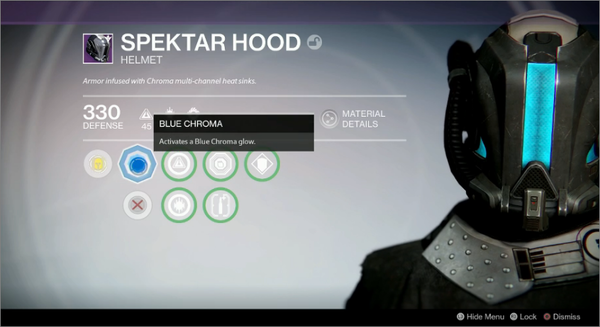 This past April update we were “gifted” a new customizable feature called “chroma” that lets you add a colored light to your gear. Unfortunately, the colors are limited and they only work on certain gear sets—sets that are honestly not worth anything in the long run. These chroma, along with shaders, only color certain parts of your character and often neglect the pieces you want to color the most, like Hunter capes. Instead of these minute little lights and limited application of shaders, why can’t the game allow for full customization? How hard is it to let me color my cape totally red? You give me a half hour’s worth of character creation customizing, so just let me color my stuff the way I want to.

It’s been two years and we’re still staring at the same three classes with the same three races with the only tweaks being an additional subclass for each one. I love my Warlock to death, but I’m ready for something more. There are only so many times you can switch subclasses before you’re tired of them and after that you just switch characters to find that it starts over again. It’s time for something new. And preferably something less humanoid? This world is rich with all kinds of aliens and fantastical robots, but all we get are humans, blue humans, and robot humans. If Destiny wants to compete with games like Battleborn and Overwatch then it’s going to have to embrace its built-in fantastical diversity real quick. 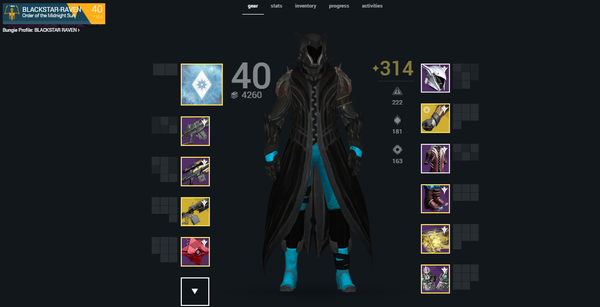 It’s always annoying when you’re playing a PVP match and you need to change your approach to the battle based on what the other guys are using and you have to spend a whole minute switching out your shit in that damn menu. It would be nice if, instead of having mapping for useless emotes on the D-Pad, there was a quick swap feature that you could tap to change your gear into a particular set you’ve placed there. It would make the gameplay smoother and it wouldn’t remove you from the experience so often. Even a gear optimizer that could select from the gear you have based on maxing out a particular stat would work. Anything would be better than the cumbersome menu swapping 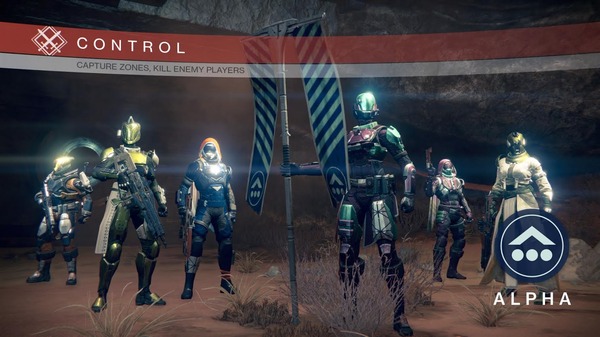 Back in the Halo days the most fun to be had with a shooter was setting up all your consoles together and playing a closed match with just your buddies with custom settings on. Destiny doesn’t let you do that. Instead, you are forced into a maximum fireteam of 6 people and you have to play against other random people without any exceptions. It’s 2016 and you’re telling me that we can’t include a feature that was standard over a decade ago? If Destiny wants to bring back its hardcore PVP players then it needs to allow for customizable, closed matches that they can freely play with their buddies in. Without it, the playlist gets stale quick and it’s always awkward when you have to kick out that 7th person who wants to join.

Alex Tisdale is a writer and illustrator who runs on coffee and pop culture. You can find him covered in ink and rambling on his website or on Twitter.
Tags