I was watching an e-sports tournament in virtual reality and the only thing I’d written down yet was “don’t mention Black Mirror.” But I was in my basement in Georgia with a TV strapped to my face, watching college students and teenagers play computer games in front of thousands of fans at the Golden State Warriors’ arena in Oakland, California, so that wasn’t going to be possible. It was like Charlie Brooker wrote my weekend for me—and for my own sake I hoped he was feeling a rare spurt of optimism when he typed this one up.

This wasn’t just any e-sports tournament, though—it was the Intel Extreme Masters, a series that one of the major e-sports promoters, ESL, has been organizing for a decade, with events held regularly throughout the world. This weekend’s line-up focused on two of the biggest games in all of e-sports, Counter-Strike: Global Offensive and League of Legends, and included some of the most successful and popular teams in the business. And, for the first time ever, it was being broadcast in virtual reality, through a partnership ESL struck with the livestreaming service Sliver.tv. So this was a kind of history, live and in VR.

I’m a little pessimistic about virtual reality, and know almost nothing about e-sports or these two specific videogames. When I first logged in to Sliver.tv and saw the crowded floor of the Oracle Arena appear in front of me I felt like I was crashing a ceremony that should have been off-limits to me, like I was spying on the sacraments of an ancient and unknowable mystery religion. The announcers intoned a rapid-fire litany of impenetrable praise as arcane rituals played out on the virtual screens in front of me, the spiel’s pitch rising and falling in conjunction with the murmurs of the crowd as player killed player and entire teams fell to crafty ambushes. I had no idea what specifically was happening, but by the rhythms and responses I could recognize that this was either a sporting event, a tent revival or maybe a little bit of both.

I kept a running track of commentary calls that stood out to me for their nonsensical and poetic beauty. It was hard writing them while nestled inside an Oculus Rift but I made it work.

“So many wombo combo comps but now it’s all about the double team.”

“We just saw how punished Stanford were when they took a wrong fight next to a dragon to lose a tower.”

I jumped back and forth between Counter-Strike and League of Legends matches throughout the weekend. Perhaps because I have more experience with shooters than MOBAs, and thus assumed I would feel at least a base familiarity with its fundamental structure and layout, Counter-Strike was especially confusing to me. There was a separate feed for each game, and I could freely switch between the two, but after a few moments with Counter-Strike I largely defaulted to League of Legends.

The only match I watched in its entirety, from start to finish, was the Legends show match between Stanford and Cal. The teams at IEM are usually pros playing for money, but there’s a dedicated attempt within the industry to grow e-sports as a college game, so IEM invited the League of Legends teams from two local universities for an exhibition match. It translated one of the most heated college rivalries in California into the digital realm, and in the process eliminated one of my major pet peeves about e-sports: the lack of a hometown team to root for, which is maybe the most satisfying (and, yes, frustrating) part of being a sports fan for me. 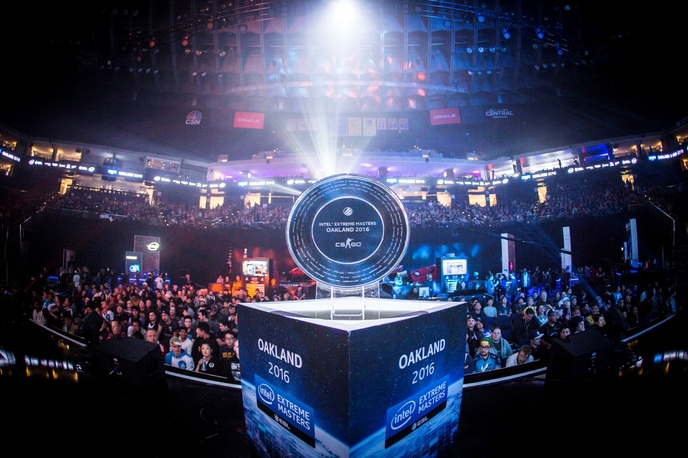 E-sports, at least the League of Legends variety, started to make sense to me while watching that Stanford / Cal show match. It helped to catch an entire match, and to have teams where fan loyalties are clear and understood, but the addition of virtual reality was actually crucial to me starting to understand this business. ESL and Sliver.tv didn’t just slap a 360 VR camera on the floor and leave it at that. The VR stream put the main feed in the upper portion of the screen; if I tilted my head up very slightly I could see the standard view of the action with the current score and a little info panel with details on every player’s performance. Below (and around) that the feed would alternate between crowd-view shots of the playing stage and an overview of the playing field. The upper portion would zoom in on specific bits of action as the commentators shouted about them, whereas the lower portion let me watch the game unfold as if I was in a baseball stadium looking down at the field. It made League of Legends look like a tabletop game, and the immediacy of VR removed any disconnect I might’ve felt if I was watching it on a TV or computer monitor.

That vantage point helped. Between watching the entire show match, having a camera angle that made it easy to understand and keep track of the physical layout of this digital space, and listening to enough of that manic commentary to be able to make sense of some of it, I found myself getting pulled into this League of Legends match. My college sports sympathies have absolutely no connection to Stanford—go Dawgs—but I found myself rooting for them as they tried to close a massive gap with their Cal rivals. And as they slowly inched closer, playing smarter and devising new tactics to overcome Cal’s brute strength attacks before eventually winning, with the announcers and audience growing more excited with every major play, I felt like I was watching any sport. The wall between me and e-sports, a wall I will admit I have made minimal effort to tear down in the past, eroded as I watched these two college teams play each other in a match that had no bearing upon the actual IEM tournament. And having been to e-sports tournaments in the past, and feeling similarly bemused every time, I can tell you that virtual reality was a key factor in wearing down that wall.

Watching IEM in VR made me think that, despite my skepticism and general disappointment with the current virtual reality technology, there might be a bright future for watching sports in VR. There are still practical concerns about these headsets—they aren’t especially comfortable, they can cause motion sickness and vertigo, the long-term health effects of regularly wearing them for extended periods of time aren’t entirely known yet—but in this situation, where I was able to come and go throughout the weekend and spend at most forty minutes at a time strapped in, it was a success. And any thoughts of a depressing Black Mirror-style scenario disappeared in short order, except for that time some guy in the audience in Oakland stared directly into the VR camera for a while, keeping perfect unbroken eye contact with me for like ten minutes, as if he knew I was there and knew all my darkest secrets.