Most people today don’t finish the videogames they start. Also many developers would tell you that games aren’t the best medium in which to tell stories. Consequently, developer’s tend to devote more time and energy to the first half of the narrative of their games—the portion more people are likely to experience. If developers can keep the narrative from falling apart in the first few hours, their game is more likely to be previewed and talked about positively. In Ether One, however, White Paper Games has created a narrative experience that is baffling until the final narrative sequence. That isn’t to say it isn’t compelling up to that point—I just found it impossible to make sense of. Having finished the game, it is clear to me Ether One baffles players, subverts their expectations, and clouds its narrative intentionally. Ether One, after all, is a game about dementia.

Players take the role of a Restorer, a sort of mental technician that enters the minds of dementia patients in order to find lost memories and help patients make sense of their lives. The mind you enter is that of a 69 year old woman named Jean who lived in a beautiful British seaside village called Pinwheel. The majority of the game is spent exploring Jean’s memories of Pinwheel.

From the outset, players are given reason to question the clinic you are working for, the Ether Institute for Telepathic Medicine, as the game begins with a voice mail from an unknown man questioning the Institute’s motives. Furthermore, players are guided by Dr. Phyllis Edmunds who often seems more concerned about making sure that Ether Institute’s funding isn’t cut than about actually helping Jean put the pieces of her past together. After completing the first restoration sequence, players are released into Jean’s memories of Pinwheel and set free to explore her recollections of the town at their own pace.

The goal in Pinwheel is to search for ribbons which represent the pieces of Jean’s memories that need to be restored. Players can also explore the town to uncover additional memories Jean had of the town and its inhabitants. Inside Pinwheel players will find struggling families, complicated love stories, stories of monsters children make up to scare each other, and the story of a horrible tragedy that shook Pinwheel and that could have been avoided. How much players interact with these stories is up to them as this content is entirely optional. 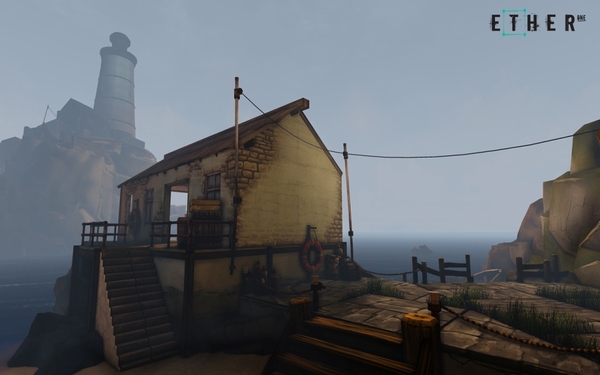 Some of these optional memories are discovered by solving puzzles that generally require completing various mundane tasks. While Ether One is a first person game, the puzzles are solved in traditional point-and-click adventure game style by finding and combining various objects in the world. These puzzles are simultaneously the most frustrating and the most compelling elements of the play experience. Some of them are incredibly difficult and some of them even seem to have been bugged in my playthrough. However, the process of figuring these puzzles out is rewarding because the objects you use to solve these puzzles tell a story as vital as the memories they uncover.

While interesting on their own, the memories I uncovered in Pinwheel were almost impossible to piece together. And thanks to the commentary of Dr. Phyllis Edmunds, I constantly wondered whether or not my efforts were doing more harm than good for Jean. My lack of ability to tie these narrative pieces together often made me want to quit playing Ether One. What kept me engaged, however, was remembering that I probably shouldn’t expect a game about dementia to make sense.

By refusing to connect Jean’s memories into a whole that players can easily digest, Ether One helps us to better understand and empathize with those who suffer from dementia. By exposing the player to frustration and clouding its already complex narrative, Ether One refuses to give players any false hope that dementia can be beaten, instead giving them a brief glimpse into what it might be like to suffer from it. In the game’s final moments, players will see that the point of Ether One was never to fix Jean, but to better understand ourselves and the world we inhabit.

Ether One was developed by White Paper Games. It is available on PC and Mac.

Drew Dixon is the editor-in-chief of Game Church. He also edits for Christ and Pop Culture and writes about videogames for Think Christian. Follow him on Twitter.