Back before Shadows Over Innistrad was released, I wrote about the vampires of that world and showed off some new and unique vampires that really helped build out the flavor for that world. Now I’m back with a preview for Eldritch Moon, the second half of the Shadows Over Innistrad set, and I have some previews of other, just-as-amazing creatures that travel through the night. But first, a story.

Magic: The Gathering has lots of different worlds, or planes, that it takes place on. Each is unique in the multiverse, and the power of the planeswalker (or the player) is that they can travel willy-nilly from plane to plane in order to experience them and grow their power. Each of these planes has its own story: Dominaria has millennia of war and apocalyptic destruction; Alara has a story of a shattered world coming together again; and Mirrodin gives us a corrupted world of living metal. Each of these planes has characters that frame the story, make for fun fiction, and generally exist in order for the fan community to talk about how much they do or do not like them. Some of them are total duds, and some of them are amazing, and some of them are legendary.

Ghoulcaller Gisa is just what it says on the label: she’s a ghoulcaller, or a necromancer who uses the bodies of the dead to create zombies. She’s the direct opposite of her brother Geralf, a stitcher who creates zombies from parts of the dead. More importantly, she has a sense of humor about herself. Luckily, I can show you a pretty good example of all of this with this preview card, a soon-to-be Limited all-star called Wailing Ghoul. 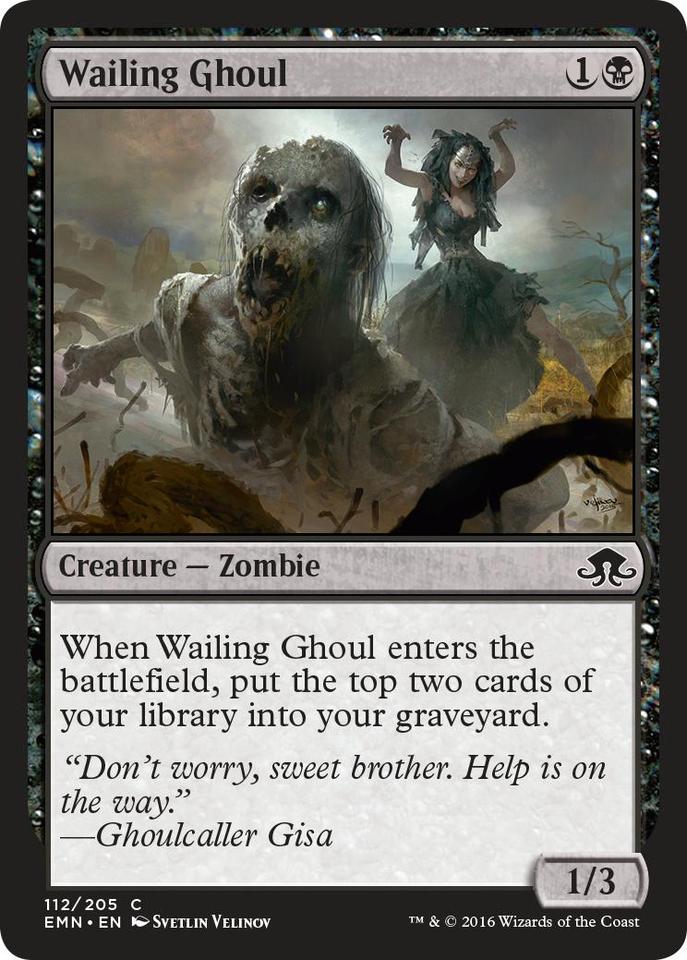 There’s nothing too flashy about this card, but it’s the kind of bread and butter that does the bulk of work in draft or sealed games of Magic. It’s a zombie that helps you dump cards in your graveyard so that you can use even more zombie-oriented cards like the combo Gisa and Geralf, the animatable Prized Amalgam, or even just increase the size of your graveyard to Macabre Waltz something back.

Just as good as the card’s mechanics are its flavor. You can really see the glee on Gisa’s face as she tears this dead being from the ground, and she’s doing it to save her slightly-boring brother. It’s something close to a joke: help is on the way just so long as she can find a bunch of the dead to grab up.

But what does her inner state look like? Why is she so unserious in the face of her straight-faced brother? I don’t have the best explanation, but I do have a deep look into her profession that might be helpful for the long term. Here’s another exclusive Paste preview for Eldritch Moon: a page about ghoulcallers from the Innistrad art book: 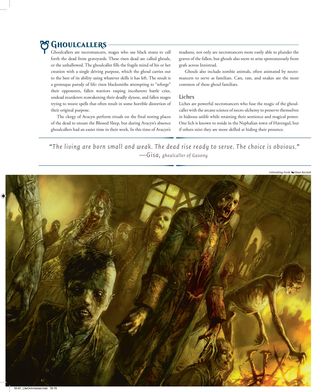 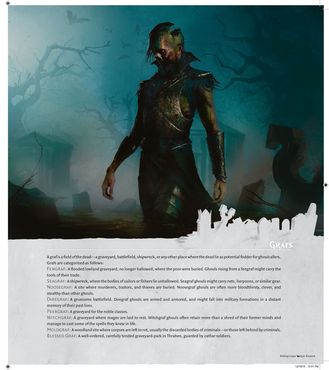 The world of zombies, werewolves, and vampires is now overrun by cults and shifting madness, but it seems like the stitchers and ghoulcallers are going to band together to fight against the invading enemies. Innistrad is under an extreme threat, but if you can raise the dead, it seems like you can afford to have a bit of humor about most existential threats. Gisa laughs at it all, and maybe she’s a good role model to have for fictional vampires and card-playing wizardpeople alike.

Cameron Kunzelman tweets at @ckunzelman and writes about games at thiscageisworms.com. His latest game, Epanalepsis, was released last year. It’s available on Steam.