A quick caveat about this advance review: the Mario Golf: World Tour servers did not appear to be online at the time of this writing. Therefore its multiplayer features have not been tested, but their presence has been noted in the review below.

There’s nothing wrong with Mario Golf: World Tour that a little personality wouldn’t fix. The eighth game in Nintendo’s Golf franchise (if we’re counting the NES entries, and I am) is as basic a game as you might expect when you mash the words “Mario” and “Golf” together on the front of the box. Easy to pick up and play, Mario Golf: World Tour is just as easy to forget when you’ve put it down.

As an on-the-go sports title, World Tour does its job: It collects a series of relatively short, themed courses that will test your long and short game (and note that your author has a terrible short game.) You can jump into the “Quick Round” mode for a bit of quickie golf solo or go online as one of 16 Nintendo characters.

But more than likely, you’ll spend the bulk of your time in the “Castle Club” career mode, where you’ll take your Mii on tour of the Mushroom Kingdom’s most prestigious golf club.

Developer Camelot made the decision to build the Castle Club as a navigable hub, meaning you can walk around the joint, talking to denizens of the Mushroom Kingdom while getting pointers about your game. Take a walk around with your Mii and hit up each of the courses where you can set your handicap in a practice round or participate in Handicap Challenges and Championships. You’ll also find practice ranges where you can brush up specific skills like swinging into a crosswind or putting spin on your ball. Here you can earn coins in matches in order to unlock clothes and gear for your Mii.

The “Castle Club” is a pain in the butt to navigate. I can imagine walking the grounds of the club and seeing Wario chowing down in the lounge or Waluigi dancing in place might be a kick for younger players, but in terms of simply getting to the next course and teeing up for practice or a tournament, an optional menu system would have been nice.

Not only is the club relatively sprawling (three stories, tons of locations), but it’s poorly organized. You’ll encounter your first course before the practice areas, which feels unintuitive. 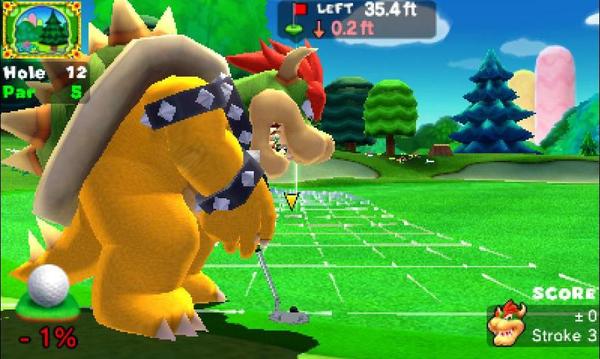 The courses themselves, however, are colorful and offer a variety of obstacles that are challenging but never frustrating. Again, World Tour is something of a no-frills experience, so don’t expect a crowd of spectators or any crazy animations going on while you play: It’s just you, your Mii and your ball, making the courses sometimes feel a bit lonely.

But I’ve spent a lot of words talking about the experience and not the actual golf game. That’s because there’s not a ton to say. World Tour delivers a simple and easy-to-play golf experience: Choose your club, line up your shot and swing. If you make it into the target area, you can get a power shot, which is a nice way to counter the wind and tricky, curving courses.

I created my Mii with a little bit of curve to his shot, meaning I spent a lot of my time learning to counter the wind, as well as accounting for the extra “oomph” of the limited-use Power Shots. There are just enough variables in each course to keep them interesting while they’re limited enough to not be daunting to the casual player for whom World Tour was designed.

A very solid golf game is buried in this somewhat sterile experience. Mario Golf: World Tour is like the Disneyland of golf games, offering plenty to look at and do, but wearing you out with quirks in its navigation and design.

Mario Golf: World Tour was developed by Camelot Planning Software and published by Nintendo. It is available for the 3DS.

Charles Webb has written pop culture criticism and news coverage for sites like Comics Bulletin, MTV and Twitchfilm. A videogame industry vet, he is a credited writer on multiple titles, most recently working at Microsoft Game Studios. Don’t look too much into it, but he is a carbon-based human.