Although Avadon 2 has been out on PC since October, I wanted to wait until its iPad release in February to dig in. That’s because the original Avadon title, The Black Fortress, was such a revelation on the tablet: it was a meaty, old-school RPG on the platform I wanted to play it on. If I was going to spend dozens of hours crawling through dungeons and slaying monsters in turn-based battles, I’d rather not risk carpal tunnel syndrome from thousands of mouse clicks. And the format made it perfect for questing on the go. The first Avadon got me through more than one long flight and interminable conference call.

Critics of Spiderweb Software’s Jeff Vogel say he’s been making the same game for decades. That’s not quite fair, but he has certainly nailed his formula. Spiderweb games are graphically simple, exploration-heavy, text-dense adventures that demand a decent amount of finicky micromanagement. Think Baldur’s Gate, but with a better UI and proper turn-based combat instead of all that pesky pausing to issue commands.

Avadon 2, the second game of a planned trilogy, is very similar to its predecessor in nearly every respect. You’ll guide your party through environments using the same tilesets and character models, hearing the same ambient sounds, interacting with the same skills/inventory bar. Aside from a few tweaks, the inventory, leveling, combat and economic systems seem essentially untouched. By and large, that suits me fine. I quite enjoy the Spiderweb formula, and there’s a definite comfort in getting caught in its familiar rhythms. And on iPad, those rhythms—dragging to move the camera, tapping to direct my party—acquire a more organic feel, even if they are somewhat less precise than mouse clicks.

As in the first game, Avadon 2 casts you as a Hand of Avadon, a sort of roving FBI agent/diplomat/mercenary working for Redbeard, the seemingly immortal ruler of Avadon. Avadon itself—used synecdochically in speech, like “Washington” or “the White House,” to represent a larger idea—is a kind of police state. (It’s also a literal place, the hub world from which you go out on adventures.) Avadon’s role is to keep the fragile peace between a factious alliance of nation-states called the Pact, as well as to guard against external threats. But the empire is crumbling: Avadon was betrayed from within during the events of the first game, and in Avadon 2, you have to decide whether you’ll play a role in accelerating that demise or guarding against it.

Normally I can’t be bothered to give the slightest of craps about political machinations in an RPG. But Vogel adroitly avoids that eye-glazing effect by giving his fantasy world a lived-in feel, much like the original Star Wars. You get the sense he would make a terrific Dungeon Master. The writing isn’t bogged down in lore, and generally takes on a believable, digestible tone, where familiar human conflicts—freedom vs. security, mercy vs. vengeance, empathy vs. duty—take center stage. The story often resonates with contemporary life: Your Hand of Avadon is presented with plenty of opportunities to overstep her bounds simply because others see her as an authority figure. Like a TSA agent, you almost always have the option to attempt coercion in dialogue. And while certain choices will net you better rewards, the game doesn’t lapse into Mass Effect-style gaminess. Making the “right choice,” as often as not, gets you nothing. 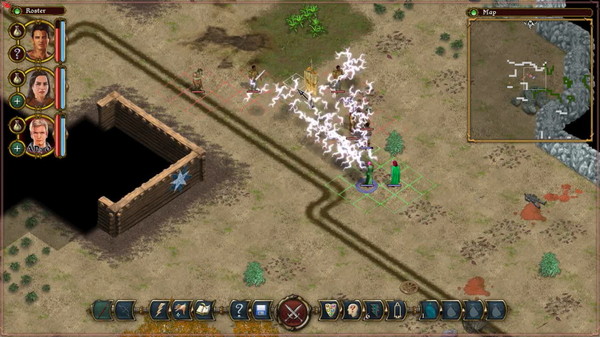 Where Avadon 2 runs into trouble is where all Spiderweb games run into trouble: There’s just too damn much of it. It absolutely has the Skyrim problem: Finishing the main storyline alone will probably take you 40 to 50 hours, and God help you if you feel compelled to complete the dozens of hours of optional sidequests. (Ironically, Vogel himself has criticized his own games for being too long.) The plot naturally tends to get diluted with such a surplus of content, and while there are some great story beats in Avadon 2—particularly the exploration of crumbling bases in the titular Corruption area—the game tends to sag in the middle. There’s also an awful lot of backtracking between areas, made more frustrating by confusing quest markers on the map.

Encounter design also leaves a bit to be desired. Avadon 2 is not as dependent on trash mobs (i.e., swarms of annoying roadblock enemies) as its predecessor, but they do still figure prominently enough to feel more like padding than challenge. (On a side note, what’s with all the giant rats? Has no one in a fantasy world ever heard of arsenic?) Boss battles can feel the same way, as they are often reliant on scripted events—e.g., get his health down by 50% and cages open, releasing his pet bats. This makes fight stages feel a little too artificial for my taste.

The leveling system in the Avadon games is also a bit of an oddity, but not necessarily unwelcome. Each character has three specialization tracks that roughly correspond to damage, skills and special powers; gaining a specialization level buffs all powers in that category. The skill tree requires you to level certain skills before others, yet because several skills are tied between specialization tracks, you’re encouraged to build relatively well-rounded characters. I prefer to do so anyway, since it means I get to experiment with different abilities, but some players will be turned off by the limitations to their builds.

One addition to the formula I particularly enjoyed was the new Tinkermage class, which I’d guess nearly everyone who played the first Avadon also chose. (If you prefer a different class, you’ll still recruit a Tinkermage, the lovably sarcastic Alcander, as one of your five companions.) While the other character classes are variations on the standard Fighter, Mage, Thief and Druid, the Tinkermage can build turrets, lending some tactical complexity to combat. Positioning is more important than it used to be, as you try to draw enemies into your turrets’ range. Tinkermages are also experts at disarming traps, which appear frequently in dungeons. The new class adds some welcome variety to combat.

Despite, or maybe because of, its similarity with its predecessor, Avadon 2 is the definition of a comfort game for me. Particularly for an iPad game—so often played while doing something else, like commuting or watching TV—there’s a certain virtue to the repetitive rhythms of explore, fight, loot, talk. But because this is a Spiderweb game, it’s not all mindless tapping on things until they die. There are some legitimately interesting human themes sprinkled into this old-school fantasy adventure. Just because it’s a comfort game doesn’t mean I don’t want it to occasionally make me think.

Avadon 2: The Corruption was developed by Spiderweb Software. It is available for iOS devices and the PC.

J.P. Grant is a Boston-based freelance writer whose work has appeared in Unwinnable, Gamers With Jobs and other outlets. He blogs about games at http://infinitelag.blogspot.com and can be found on Twitter at @johnpetergrant.