There are people in this world that already love Skweek. They’re probably European. I’d never heard of Skweek before, even though 1991, the year of its birth, was perhaps the peak of my videogame obsession. Maybe it’s just because I never owned a Sega Game Gear or Atari Lynx, which seem to be the most successful systems the game was available for in America. I knew two guys with a Game Gear and one with a Lynx but never heard a peep about Skweek.

That’s a shame. The furry little space goblin the game is named after may not pop up in the trailer for Wreck-It Ralph, but just because the character isn’t iconic on these shores doesn’t mean his game is best left forgotten. The new iOS rebirth of Skweek has its share of frustrations, but within its shaggy exterior rests an acceptably puzzling adventure that fits perfectly into the portable world of the iOS device. 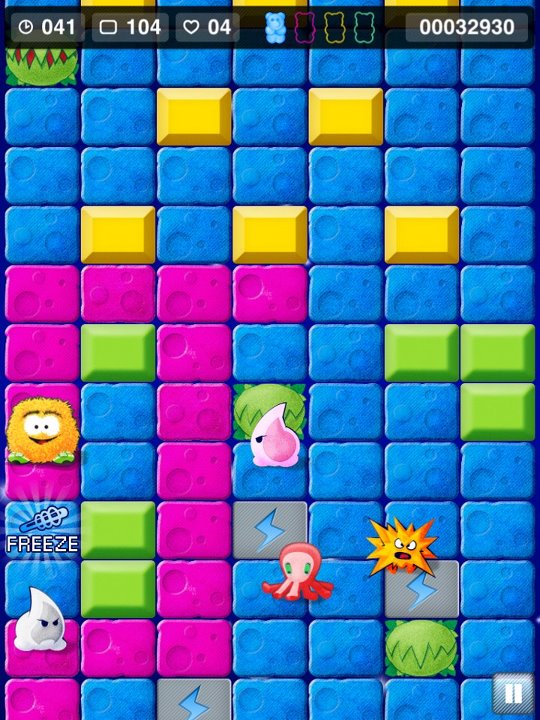 I didn’t need to be familiar with Skweek to instantly understand how it operates. The goal is to turn blue squares purple by walking over them. All I have to do to make that happen is drag my finger across the screen. Avoid the edges and the occasional open blocks so that Super Skweek doesn’t drift off into space, and try to shoot the various creeps that plague each level before their deadly touch fells the adorable little scamp. Skweek will fire off a volley of his dangerous spittle with a simple tap of the screen. Various power-ups appear on each level, increasing Skweek’s speed, scattering his shots into four directions, and offering other life-saving perks. Repeat through all 40 increasingly complex levels until finished.

Skweek makes me wish I had a Lynx or a Game Gear. The game’s fundamentals are rock-solid and timeless, but the touchscreen interface regularly drives me crazy. Ideally I could touch a point on the screen and watch Skweek effortlessly walk in that direction. Instead I have to hold my finger down and drag it slowly in the direction I want Skweek to walk. Of course he’s slower than my finger, so there’s a bit of lag between our actions. The controls are just imprecise enough to turn corners and space chasms into hard-to-avoid obstacles. Occasionally I’d jab the screen to fire and instead Skweek would walk a few steps into an enemy. These controls make me long for the tactile and more reliable interface of a direction pad or joystick. The optional “fling” controls are better, centralizing the interactive portion of the screen into a small circle, but it still can’t match a real stick.

It isn’t difficult to maneuver around Skweek’s minor failings and recognize why the game has become something of a cult classic. It’s always disappointing to play a game and know that it’d be better on a different platform, though, with a controller that was a more natural fit for the mechanics. Too bad WiiWare is a barren wasteland and Xbox Live Arcade and PlayStation Network won’t support reasonable pricing plans, as Skweek would benefit greatly from a control scheme as traditional as its action.