Persona 5 is at once a breathtaking reinvigoration of everything players love about Persona, as well as a return to form to the series’ beginnings. Throughout the Persona series, the shadow-slaying, dungeon crawling titles have established a slew of ongoing narrative cues: teenagers toeing a delicate balancing act between their day-to-day class schedule and saving the world, a mysteriously long-nosed imp named Igor prodding on your journey from within his Velvet Room, and enough meditation on the concept of reality that you may need to brush up on Jung just to keep up.

The latest entry in the series plays like a greatest hits album. The biggest series missteps have been avoided, like Persona 3’s insistence on allowing the player to control only the protagonist in battle rather than the entire party, and Atlus wisely decided against returning to the random enemy encounters of the series’ past. However, the Shin Megami Tensei games and the first few Persona titles rewarded players for talking to beaten-down monsters instead of defeating them long before Undertale was lauded for its pacifism, and likewise Persona 5 gives players the chance to chat up shadows instead of killing them.

Crucially, it removes a key feature from previous iterations of the series that, at first, seems like a solely stylistic choice: instead of procedurally generated dungeons, Persona 5 goes with a handmade approach, using wide-open rooms, overlooks, circular stairs, dead ends and side rooms to make each dungeon feel different than the next. This distinction alone strengthens the game in ways past entries have merely hinted at.

Released in 2006, Persona 3’s Tartarus is a shifting, towering maze of hallways that only appears during “The Dark Hour,” when time stops and monsters roam the world. Structurally, players can never count on their sense of direction to guide them, as the game procedurally generates levels of the tower each time players visit. Thematically, Tartarus fits within the established storyline and also made for a boastful demonstration of the Playstation 2’s hardware in its time, with infinite possibilities awaiting players.

In a similar vein, Persona 4 generates a new map every time you visit the mysterious “Midnight Channel,” with the protagonists’ investigation team making their way through the hazy, foggy landscape, never quite sure where they are. Generated by the collective consciousness of humanity, each dungeon that materializes in the Midnight Channel takes the form of dreams and desires of those trapped inside. 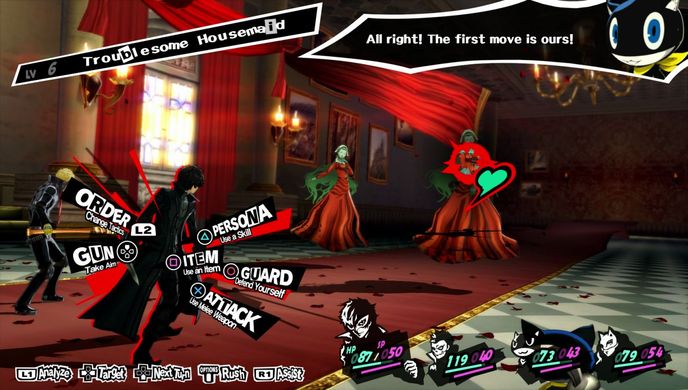 In practice, both games’ dungeons lead to a feeling of running through endless hallways in search of stairs to advance to the next level, but the art design of each dungeon amounted to little more than window dressing. Outside of some thematic textures to the walls and doors, there isn’t much to distinguish the first level from the last, aside from perhaps the size of the floor or the strength of the enemies. Players can ultimately plow through these levels by just watching the simplified minimap without missing too much—guide the arrow through the maze, avoid or fight the red dots, and find the stairs. Compared to the fleshed-out goings on in the towns of Inaba and Iwatodai, the staid interiors of the Midnight Channel and Tartarus felt like a missed opportunity to continue to build upon the games’ narratives.

The dichotomy of everyday high school activities by day and monster-battling dungeon crawling by night defines the series, but where Persona 5 shines is in making those dungeons feel as lived-in and essential to the story as the various towns, subway stations and cramped corner stores of the daytime.

While it doesn’t strive for the reality-eschewing playfulness of Double Fine’s Psychonauts, for example, Persona 5’s Metaverse comes closer to making the player feel that they’re trawling through the metaphysical manifestations of internal psyches than ever before. The sprawling, vibrant “palaces” do more than serve as a setting to bash on shadows, but provide environmental storytelling opportunities and offer up details about each palace owner’s true intentions and malicious deeds. Whether it’s a salacious teacher who considers all of his female students “queens” and uses curvaceous torsos as decorative columns, or a greedy banker who only thinks of other people as walking ATMs, we never forget where in the metaverse our Phantom Thieves currently sit, and these touches give us reminders of the crimes each villain has committed. Compare this to the bathhouse in Persona 4, intended as a demonstration of a character’s conflicted sexual orientation that instead boiled down to repeating hallways full of benches.

Not only does the environmental storytelling further flesh out the narrative, it also makes the action portions of the game more enjoyable to play. Allowing each dungeon to be intricately designed creates opportunities for thrilling in-the-moment tactical decisions that were previously unavailable in previous entries, with furniture, columns and more obstacles to hide behind while lying in wait to ambush your enemies. As players bound through a celebrated painter’s increasingly surreal museum dedicated to his life, puzzles inherent to the narrative—determining which version of his masterpiece is the “real” one from a handful of fakes—keeps the player on their toes as they battle through monsters. It’s a far cry from the simplified mechanics of Persona 3 and 4, which required players to hang back while shadows ambled around the room and pounce on them the second they turned their backs, or the random encounters of the older titles.

It’s rare in JRPGs to feel like you’re actively role-playing; while the genre often offers up engrossing tales of saving the world, oftentimes the player is reduced to a passive observer and tactician, navigating menus and tabulating experience points to guide characters to victory. As you sneak through each palace, it’s hard to not feel like a thief yourself, zipping from hiding spot to hiding spot in order to line up the perfect ambush, and slyly making your way into these environments unseen to rob the owners blind and catch your enemies unaware. This is all compounded by the game’s upending of seasoned Persona players’ expectations from previously straight-ahead dungeon crawls. Breaks in the action, like gated areas within palaces that require IRL sleuthing, or narrative events that require splitting up your group, such as trapping party members behind security lasers, disrupt the day-in and day-out grind of the previous games.

While procedural generation is capable of creating a seemingly infinite array of variety in games such as No Man’s Sky or Spelunky, Persona 5 shows just how vital a well-crafted setting can be. As a reward for spending dozens of hours trawling through these dungeons, Atlus has crafted a story with expressive environments that reward players’ attention and enrich the experience beyond simply updating the set dressing.

Davis Cox has written for Kill Screen and is on Twitter @dontstaylong.