Early on in the neo-noir thriller Read Only Memories, I found myself having a discussion with a sentient A.I. about the First Law of Robotics. Rather than come up with an excuse for why machines don’t harm people, the AI replied simply with, “why don’t you walk around murdering people?” The social contract that keeps society hinged together feels exclusively human, yet my time with Memories was mostly spent tearing down any notions I had of the words “exclusive” or “defined.”

Your self-insert protagonist is a journalist, living in the lesser parts of Neo-San Francisco, who seems satisfied to stay on the outer edges of conflict and just scrape by, reviewing headphones and writing fluff pieces. That is, until a ROM shows up to your door, saying an old friend of yours has been abducted. ROMs are helper machines that have become prevalent everywhere, handling many of the menial jobs for people, but this one is different; this robot, appropriately named Turing, is “sapient”—a term to express that Turing is capable of independent thought, feeling and procedural personality development.

The world of Memories has advanced past our own, but stayed mostly the same. In the year 2064, differences of sexuality or gender are no longer issues, all attributions are accepted and there’s rarely a conflict over religion. These once-controversial issues are instead mirrored in the plight of hybrids, humans who have elected to undergo surgery to splice themselves with animal genes, and with the controversial use of cybernetic enhancements like neural interfaces and robotic limbs. The issue of “pure meat” vs. “altered” people rages on, with protests outside gene clinics and furious discourse on both sides. Yet with the addition of Turing, mankind might face an even greater debate, as now they have to cope with the idea that a machine might be as real and human as they are.

As you and your newfound partner start to track the trail of your missing friend and piece together the reasons for his disappearance, you’ll begin to notice a number of similarities to noir works like Blade Runner or Chinatown. This is very much a hard-boiled investigative story, complete with cover-ups, twists and conspiracies, but the addition of Turing gives the formula an interesting angle. 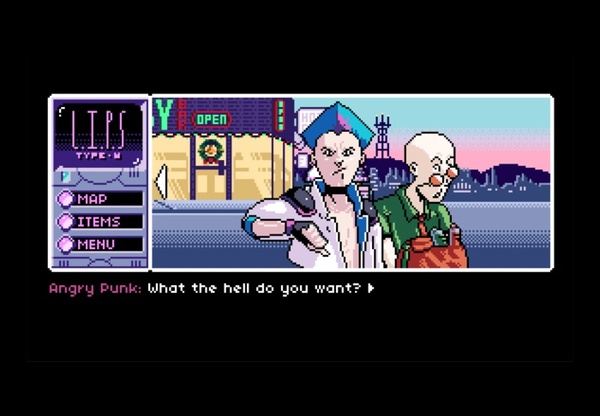 Most of your interactions will be with Turing, and they play out in a point-and-click adventure style. As you learn more about their background, you start to shape Turing’s future. The ROM will respond to how you treat both them and other people, and gradually grow into a person. Turing holds grudges, feels emotions, has sentimental attachments and paints abstract art to express feelings. It’s hard to define Turing by any one term, because its character feels less like your typical A.I.-with-a-soul and more like a real, multifaceted, complex person. As Turing’s personality gradually shapes and manifests, they feel less like a tag-a-long and more like a second viewpoint on the events at hand. Your interactions with this thoughtful machine are some of the best moments in Memories.

The rest of the cast is a lively bunch as well, and each embodies a different facet of the world. I was especially drawn to Jess, a hybrid woman who is initially quite cold to your protagonist’s line of questioning. As you learn more about the struggle of hybrids and especially her backstory, Jess turns sympathetic—though she still has claws to pull if you say the wrong thing at the wrong time.

It’s characters like Turing, Jess, the hacker TOMCAT and Detective Rivers that drive the story, which helps the plot move through the drudgery that would otherwise weigh it down. The hardboiled detective theme relies on having a beautiful style to suck you in, and characters that are interesting and complex enough to keep the story moving, and Memories manages both of these well enough. The main plot falls into a lot of tropes of the genre, though, so if you’ve seen any movies like Blade Runner you can probably see a good number of the twists coming. These surprises still have dramatic power, though, even when they’re predictable.

If I had one major complaint with Memories it would be that the pacing often suffers in some areas. Whether it’s a puzzle that needs solving or a line of questioning that seems to drag on for a long time, there can be a lot of dead time between major story beats. Choice seems a little inconsequential as well, as often I’d fail a puzzle or interrogation, only to have the reward handed to me later anyways. I didn’t have to repeat frustrating sequences, but was often left wondering why I was tasked with them anyways.

Read Only Memories manages to frame current issues in a neo-noir light, and excels in many ways at that. I’m still thinking about Turing’s notion of the social contract, and how that relates to the way we interact with others. Are we meant to always be conflicting with the Other, drawing lines in the sand about what is and what isn’t, or can all sapient beings—people—like Turing and Jess one day be commonly accepted? Memories doesn’t answer that question—what game could?—but it starts the conversation, and that’s valuable enough on its own.

Disclosure: Paste’s assistant games editor is in a relationship with one of the creators of Read Only Memories. That editor has neither worked on nor seen this review.

Read Only Memories was developed and published by MidBoss. It is available for PC, Mac and Linux.

Eric Van Allen is an Atlanta-based writer and Paste intern. You can follow his games rumblings @seamoosi on Twitter.