My relationship with South Park has changed a lot since my initial encounters with the show. I can very clearly remember my first episode—“Pinkeye” from the first season—and how it made me feel. It was risqué and I very clearly knew that I was seeing something that was for adults rather than for me. The content was weird, Kenny died in the first moments, and Cartman was dressed like Hitler. In the years afterward, I saw sporadic episodes, but it was my late middle school years that saw me saving up money with friends to buy seasons at a time on DVD. We would pass them around, or better yet stay up all night and marathon the show. The irreverence was a mantra—at that point in my life, the show was for me.

And then, at some point during high school or later, it stopped being for me again. The smugness of the political strategy started rubbing me the wrong way. The show lives on its ability to declare that any political position, conservative or progressive, radical or liberal, is just as bad and illogical as any other. The equivocating across the board got on my nerves, and the language and concepts that the show trades on to make its rhetorical point often directly insulted me or people I care about. I wasn’t in middle school any longer; the “transgressions” were simple and trite, and more often than not I could tune into the show and hear the same ignorant opinions that I could get from any random person in my small, politically conservative Southern hometown. So I stopped watching.

South Park: The Stick of Truth has all of the same problems as the show. If the show has ever offended you, disgusted you, suggested that you may not exist, or directly insulted one of your deeply held beliefs, chances are very good that the game will do the same. I want to be clear on that, because I cannot in good conscience let you proceed without knowing that the song remains the same as to what you can expect from the world of South Park. 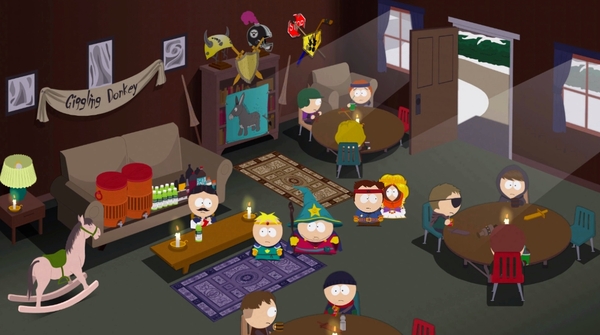 I went into the game with an extreme amount of ambivalence. I was cold on South Park, but extremely enamored with Obsidian, with Knights of the Old Republic II and Alpha Protocol topping my list of games that I’ve fallen in love with over the years. I wanted to know what they were doing, and how they were doing it, and how the studio might have managed to meld cursing children with their wonderful brand of role-playing game mechanics.

The Stick of Truth puts you in the town of South Park as New Kid. There are not gender options in the game, and while you can dress New Kid up in the copious amounts of clothes that transcend gender and species, he always remains a he. The game unfolds like an episode of the show, taking a ridiculous premise—the Stick of Truth is caught up in a neo-Tolkien fantasy battle between several groups of children—and taking it as far as it will go. Along the way, there are various story beats and sidequests that bring the player close to various characters and locales from the show. Over the course of my playthrough I saw the goth kids, Lemmywinks, underpants gnomes, Al Gore, Jesus, Stark’s Pond, Terrance and Philip, and quite a few more. Some of these encounters are fresh and new, and some of them feel like tired references in a weak attempt to get you to remember a major plotline from the show. 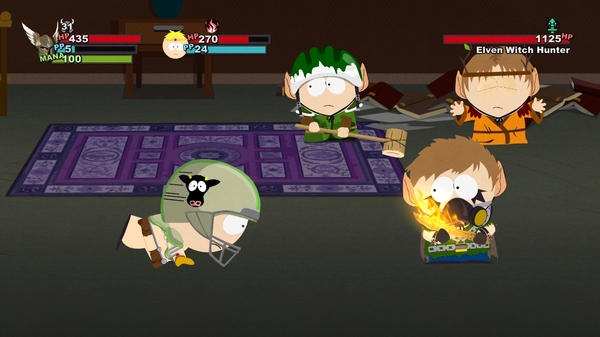 The actual gameplay is a combination of point and click adventuring and classic JRPG-style battles. New Kid wanders around South Park, shooting shiny things, collecting Chinpokomon, raising and lowering ladders, and invading every home, office and business in order to loot them of every piece of junk and clothing item you can find. During this walking around, you can be attacked by enemies, which range from dire bears to elves to Nazi zombies over the course of the game. In those moments, you are whisked away to a battle screen, where you attack and block with timed button presses with the occasional quick time event for a special attack. It is in these fights that The Stick of Truth has some of its best moments. Battle after battle gets boring in even the best RPGs, and this game really does manage to keep it fresh by constantly involving the player in fairly difficult timed blocking maneuvers.

Strangely, the truly amazing portions of the game are afforded by the South Park art style. In most other games, there is a gulf between cutscene depictions of characters and how you experience those characters in gameplay. In The Last of Us, there is a difference between watching Joel and embodying him. The Stick of Truth draws those two things together better than any other game in recent memory; the game moves from play to scripted sequences to full-on narrative cutscenes with no hitches and rarely a significant change in the art style, which makes it feel as if you’re controlling an episode of the TV show. It really is a phenomenal feeling.

Ultimately, The Stick of Truth is a game about your tolerance for South Park. I was able to sit through the most painful and predictable parts of the game—including multiple minigames that simulate abortion or anal probing—and I think that I was rewarded with some profoundly amazing moments, like Princess Kenny’s anime-inspired reality or the Dragon Quest lookalike Kingdom of Canada. But at the same time, I don’t know if the good (or the amazing) outweighs the crass, the offensive and the just plain boring. Seeing jokes that play for middle schoolers being marketed for grown adults to purchase and chuckle at in a self-referential loop is at best tired and unoriginal. At worst, it reinforces narratives of exclusion, of justifying verbal harassment, and of trivializing the real and traumatic events of people who aren’t silly animated characters and can therefore be hurt by those verbal jokes and visual depictions.

South Park: The Stick of Truth was developed by Obsidian Entertainment and South Park Digital Studios and published by Ubisoft. Our review is based on the PC version. It is also available for the Playstation 3 and Xbox 360.

south park: the stick of truth