A significant portion of Spec Ops: The Line is spent cowering behind a wall. From a third person perspective, we watch Captain Martin Walker follow the orders we input through our controller: wait for the perfect opportunity and then execute the kill. Then do it again. And again.

In the typically strained relationship between player and videogame protagonist, there is a constant tension. The player knows better. He knows that Walker is headed down a road of death and destruction and misery. He knows that the faction isn’t following orders; that things will get messy, because that’s the type of story this is supposed to be: a horrible one. We wait with baited breath for things to go wrong.

While there is indeed a significant overlap between the motivations and expectations of the player and protagonist, that starts to change as the firefights become more heated and as the protagonist grows more impulsive. Spec Ops: The Line turns the heat up on Walker ever so gradually, resulting in a story arc that illuminates the vast gulf between the mindset of a civilian player and the soldier at war.

The game opens on a standard blockbuster-style set piece, complete with a turret sequence and an explosive finish that concludes with a hard cut to black. The clichés continue with a flashback to the beginning of the story and the root cause of these events. We watch Walker choose between grey areas, and we sympathize with his intense desire to be an honorable hero. And yet, as the choices become more difficult, the two men in his battalion begin to doubt him.

But they still follow orders without question, at least when standard-issue killing is the plan. One of the primary mechanics of Spec Ops: The Line involves aiming at enemies and pressing the right-bumper, which causes Walker to call out an order to his troops to take them out. This is the safest way to fight—shooting the occasional bad guy myself every now and again, but for the most part barking out kill orders to my squad. When one of them takes too much damage, Walker can simply instruct the other to heal him. Walker calls the shots, trying to keep his hands as clean as possible.

Still, Walker occasionally has to get dirty. At the player’s control, Walker kills legions of soldiers. The shooting controls are gratifying and simple. Death is easily offered up to the seemingly crazed and mislead groups that insist on keeping Walker and friends from completing their self-assigned mission. 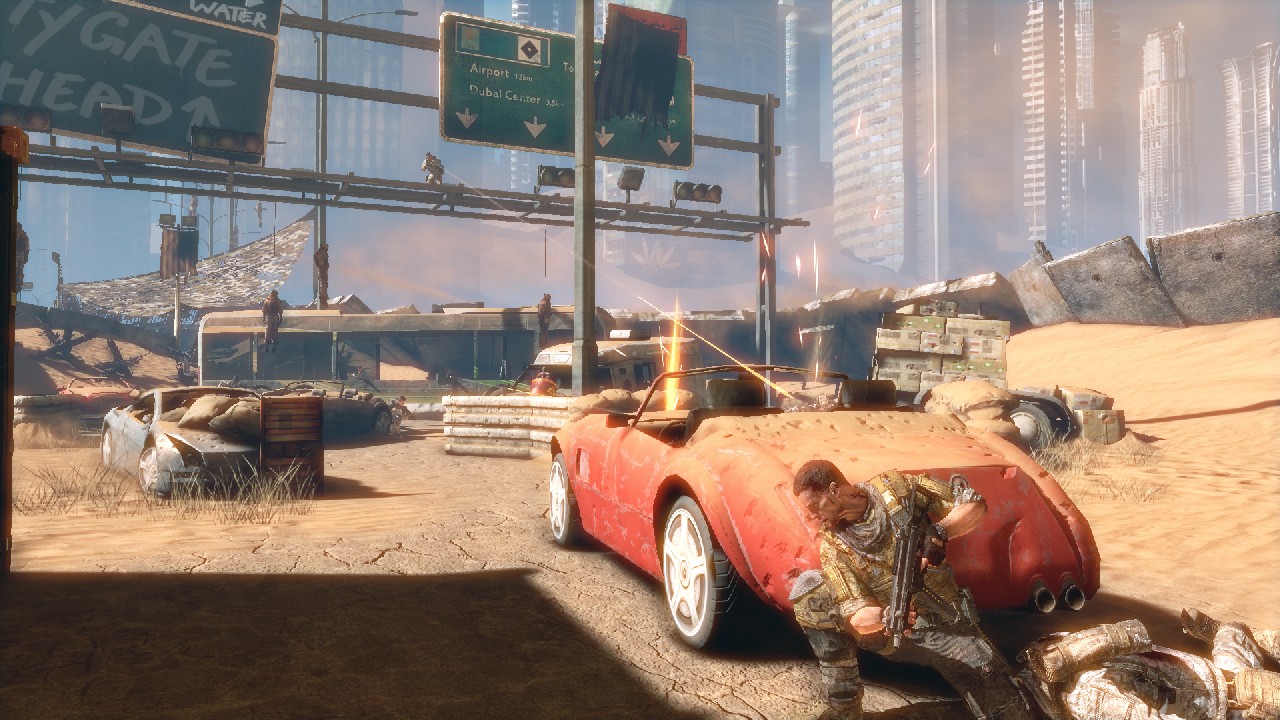 Mechanically, the game finds ways to set itself apart from standard war games: third-person perspective, cover-mechanics, squad commands and the occasional ethical choice give the game a decidedly distinct feel. Beyond that, they serve a purpose that only becomes evident later in the game: they provide the player with a significant sense of distance from the avatar.

Because we’re not playing in first person, we don’t automatically equate every single action with our own. Because we’re staring at the faces of our character and not down the barrel of a gun, we think about characters and their reactions rather than our own. We see Walker’s war-torn body as the battle drags on. We see a concerned look on his face as he barks out a command. The focal point of the game becomes the soldier, not the explosions or the targets. And we see the physical action of hiding behind a wall, the posture of a man who is, at least to some degree, afraid of being shot. And then, we make him press on.

The game’s few ethical choices are an offering to the player that causes us to feel empowered in the midst of a series of dead ends and screw-ups. The more frustrated we become with Walker’s situation and the atrocities we are witnessing along the way, the more we crave the ability to change this world—to make a mark on it ourselves. We are convinced that Walker needs our guiding hand, and so we gleefully make the choice to save civilians, or to execute the man who most deserves it. These are still difficult choices, but at least they are choices we can own.

You may have been told that this is the first war game that is actually about war. You may have been told that it causes the player to come to terms with the horrors of war and the impact it has on the individuals involved. But it’s not. It’s about games about war and, more importantly, about the people who play them. While the first half of the game manages a straight-faced narrative about the gruesome battles at hand, as the player follows Walker deeper into the rabbit hole, the player is met with a sneering, knowing grin.

As we observe Walker from behind, and hear him bark orders, we become aware of his mental decomposition. Our own awareness of the situation is a stark contrast from his stubborn inability to see the truth in front of his eyes. As we reach the end of the story, we begin to see the futility of the few choices we were given to make. While the player’s attempts to make a mark on the city of Dubai were utterly ineffective, Walker manages to make a significantly large negative mark on the world.

“To kill for yourself is murder. To kill for your government is heroic. To kill for entertainment is harmless.” Later in the game, this quote appears on a loading screen, along with other transparently sarcastic statements like “This is all your fault,” and “You are still a good person.” These statements are directed at us, and intend to cause us to laugh at ourselves, to question our motivations in playing these games. As the story progresses, as events climax and wind down, the challenge to the player is unmistakable.

Walker may look fearful, hiding behind cover and calling out orders to his troops. But the real cowards are the players, content to ignore real wars for false ones, spending their money on yearly installments of war games that aim to entertain rather than inform, to dull rather than comment on any aspect of reality. We tell ourselves we want to honor the troops, but what Spec Ops: The Line makes so clear is that our interest isn’t in any sort of reality at all. We just want an escape from the dangers of mundanity, no matter what the cost.

Spec Ops: The Line was developed by Yager Development and published by 2K Games. Our review is based on the Xbox 360 verison. It is also available for the PlayStation 3 and PC.

Richard Clark is the managing editor of Gamechurch, the editor-in-chief of Christ and Pop Culture, a regular columnist at Unwinnable, and a staff writer for Kill Screen. He can be reached at deadyetliving at gmail dot com or followed on twitter @deadyetliving.