It would be easy to dismiss Undertale. The game bills itself as a traditional, turn-based RPG where you don’t have to kill anyone, which immediately should raise some flags and some eyebrows. It’s packaged with cutesy, rudimentary 8-bit graphics, and its trailer promises some jokes. It looks like it might be fun but not exactly like a world-shattering experience. All this said: Despite outward appearances, Undertale is a very, very good game.

Undertale’s plot starts out innocuously enough. Long ago, monsters and humans used to live together in harmony, until the humans did the inevitable and betrayed the monsters, killing many and sealing the rest underground behind a magical barrier. Many years later, you, a young child, trip and fall into a ravine, landing in the world of the monsters. 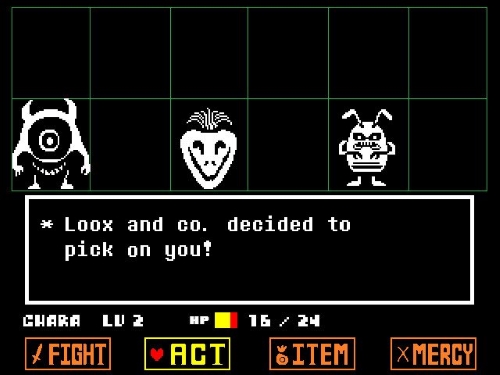 Undertale tells you right off the bat that if you can, you should try to solve your problems with anything other than violence. When a battle starts, it becomes a first-person affair, akin to the original Dragon Quest, but instead of trading blows and spells, your opponent fires bullets at your heart, which you must evade. Also, you try to tell your enemy jokes to get them to calm down.

On an enemy’s turn, you control a small heart trying to dodge shots in something very reminiscent of ‘bullet-hell’ shooters. On your turn, you can attack like usual, dealing more damage with good timing, but most of the time you’ll be doing other actions—trying to figure out what will make your opponent give up so you can spare them, ending the battle peacefully. A literal guard dog, armor-clad, can be sedated with a pat on the head. A germophobic monster calms down if you relent and let them clean you up a bit. This turns the battles into delightful puzzles, with you, the player, trying to figure out the best way to proceed while dodging death. The puzzles also build on themselves over time, becoming ever-more complex and even more delightful.

While the battles are the main crux of the game, the way these encounters morph and shift as the game wills is what truly struck me. The ‘bullets’ you avoid can be as simple as a frog jumping across the screen or as fantastical as a sun exploding its rays onto the battlefield. Likewise, some enemies change how the very system acts. Maybe in one battle you’ll be playing more of a rhythm game. In another, you’re playing a quiz show. In still another, perhaps you’re dropped into an actual shooter segment where you can fire back. The game changes its ruleset to suit its own whims, and just as you think you’ve seen everything on offer, it mutates in a way that can shock and dazzle. It’s refreshing to see a game build up its own conventions and then immediately alter or evolve them as it sees fit. 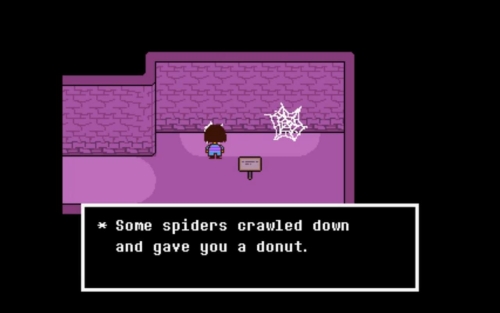 The gameplay is not the only place where Undertale shines, however. Undertale’s sense of humor is a constant drumbeat—sometimes quiet and in the background, and other times taking center stage. (I often found myself grinning in spite of myself; more than once, I laughed out loud.) Most impressively, Undertale’s humor comes off as effortless. The game never tries too hard. Rather, it’s a comfortable brand of humor, eliciting as many smiles at its sweetness as it does chortles at its outrageousness.

This changes too with the characters present, as each character has their own unique style of humor that pairs well with their personality. This wide-ranging cast of well-written characters are surprisingly relatable, even when they are superficially outlandish. Even the battles are infused with humor, with a battle’s solution and mechanics bringing as much joy as the writing.

Make no mistake: Undertale can at times be poignant and even quite sad. With progress, it becomes clear that these monsters are suffering in their underground world, unable even to see the sun. Beyond all else, these characters are in need of hope. Indeed, hope and despair are the game’s two consistent themes, and the tug-of-war between the two mirrors the internal conflict of every character you’ll meet. Many monsters will treat you as an obstacle, a threat, while at the same time believing that you could potentially be a friend. It’s an interesting—and really, very human—contradiction.

Undertale is not perfect. At a few junctures in the story, the game unexpectedly veers into horror territory. These horror segments aren’t bad, per se, but compared to the rest of the game these parts stand out as weak. The rest of the game feels so thoroughly genuine and authentic; these isolated moments were, for me, tonally inconsistent, dissonant. Worse, I’m just not a fan of horror, so these beats in an otherwise touching and funny game left a bad taste in my mouth. If these parts were excised, the game would not suffer at all. 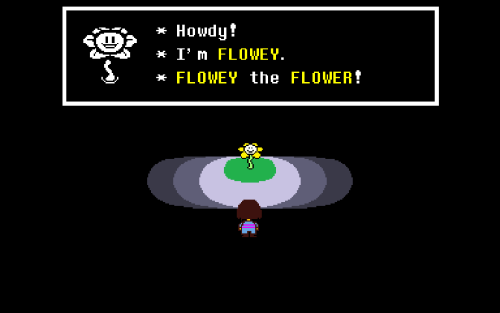 The other thing I didn’t care for in Undertale (extremely minor spoilers follow, so you might skip this paragraph) is the fact that there are several endings. This in itself isn’t a big deal—I’d ordinarily celebrate playing the game a second time to see something different—but the ‘standard’ ending just doesn’t feel very fulfilling on its own. In fact, you’re given a clue as how to get a ‘better’ ending after the credits roll. So, a little counterintuitively, it feels like there’s only one ending to the game that you’re supposed to strive towards, where any other ending you get is just a step towards fulfilling the ‘true’ ending. I would have liked some more development in the other endings to make it feel like the game has a real, full stop—not just a comma before the next part.

These are minor quibbles, however. Undertale is a special game, the likes of which come along only once in a great while. It’s a look into a parallel universe—one where videogames have realized a bit more of their potential than, say, the AAA industry has in our world. It’s a game that can make you laugh while teary-eyed, where both competing emotions are natural and genuine. It’s fun, it’s sweet; it’s an experience that will stay with you long after you’ve put the game away.

Undertale was developed by Toby Fox. It is available for Mac and Windows PC, either on Steam or as a DRM-free download.

Bryce Duzan is a freelance journalist and game designer, and strives to bring a queer perspective to board games and tabletop RPGs. He can be found on Twitter as @Spincut.