When I first met Dance Dance Revolution producer Naoki Maeda he explained to me why his popular toe-tapping videogame featured hyperactive Eurobeat-flavored techno rather than recognizable hits. “Sometimes pop music is not necessary the best to bring out the maximum ability of the game,” he said. “We think of a sequence – the step data first – then we write music to match the sequence data.” And like that I immediately understood why all the music in that series was so damn corny sounding – the quality of the music took a back seat to the complexity of the patterns the game threw at the player. Dance Dance Revolution made a habit of putting the gameplay cart before the aural horse.

The songs in Rock Band and Guitar Hero come at the music game problem from the opposite direction. The creators of those games hand pick great songs by popular artists and let the track dictate how easy or hard a tune will be to play on your plastic guitar. Here the tempo, tone and genre of the music winds up determining the difficulty. Heavy metal, progressive and epic classic rock songs like “Green Grass and High Tides” become the most difficult songs to play. Stripped down punk ditties wind up feeling simple and repetitive.

I bring up these old games as a preface because Rhythm Heaven Fever isn’t hemmed in by either approach. “It goes both ways,” sound director Masami Yone told me recently. “When the game comes first, the first thing we do is figure out a rhythm that matches well with the rules we’ve developed for a character’s movements, and then we create music to match the rhythm. When the music comes first, sometimes it inspires us to come up with interesting game situations and we’re able to build patterns that unfold in a musically pleasant way.” 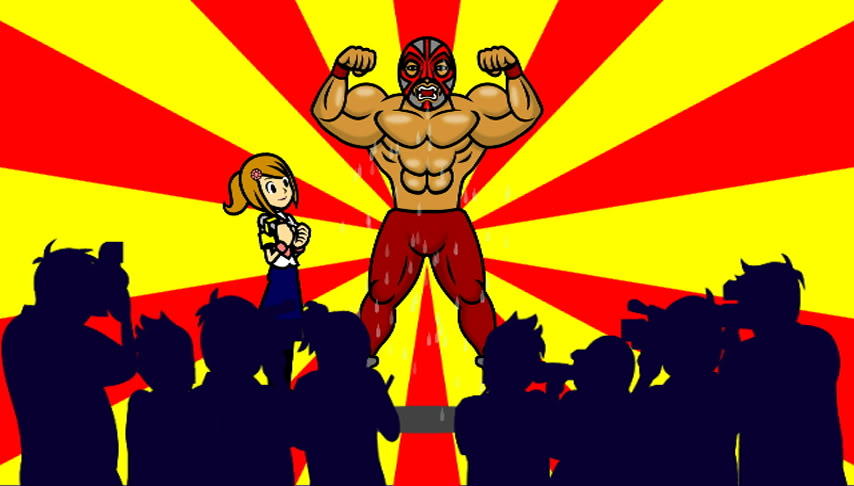 It’s this flexible approach to the music game that makes Rhythm Heaven Fever so freewheeling and fun. Across the game’s dozens of mini-games you’ll play golf with a monkey, stab at food with a fork and assemble tiny robots in a factory. Most of these weirdo scenarios are brought to life by artist Ko Takeuchi – one of the warped creators behind Nintendo’s Wario Ware games.

Takeuchi’s clean, cartoon lines give Rhythm Heaven Fever the look of slick Japanese character goods, like the adorable vinyl toys in stickers you’d find in a hip boutique like Giant Robot. The end result is a collection of cute, catchy and frequently challenging mini-games prettier than anything you’ve ever seen on your Wii.

And it bears repeating – Rhythm Heaven Fever is a game born from a creative process so free that the first step in game design can be a tune tinkled on the keyboard or a sketch of a Mexican Wrestler idly drawn on a notepad. If music games have felt too rote lately or the subject of most popular games too homogenous you’re looking at the answer to your prayers.

Rhythm Heaven Fever was developed and published by Nintendo. It is available for the Nintendo Wii.

Gus Mastrapa is a freelance writer from Apple Valley, CA. His work has appeared in Edge, Variety and Wired. Follow him on Twitter: @Triphibian.