Guardians of the Galaxy Vol. 2 director James Gunn gave fans a sneak preview of the forthcoming film on Twitter today in the form of a piece of concept art by Andy Park. Park has also worked on conceptual art for other Marvel films like Ant-Man, Captain America: Civil War and Thor: Ragnarok.

“She has never really experienced social interaction,” executive producer Jonathan Schwartz told EW. “Everything she learns about dealing with people, she learns from the Guardians of the Galaxy, which is a very weird group to learn your social intricacies from.”

The sequel will also include baby Groot, as introduced at the end of the first film. “He doesn’t have the wisdom and experience of [older] Groot,” said Schwartz. “He’s a younger Groot and a more rambunctious Groot. The question is, is he the same Groot, just smaller? Or is he a different Groot that’s sprung up from the seed of the first Groot?”

Marvel will release a group portrait of the cast, also drawn by Park, during San Diego’s Comic-Con International on July 21-24.

Guardians of the Galaxy Vol. 2 comes to theatres on May 5, 2017. Until then, fans can tide themselves over on the animated Disney XD version. Check out the film’s concept art below—click to enlarge. 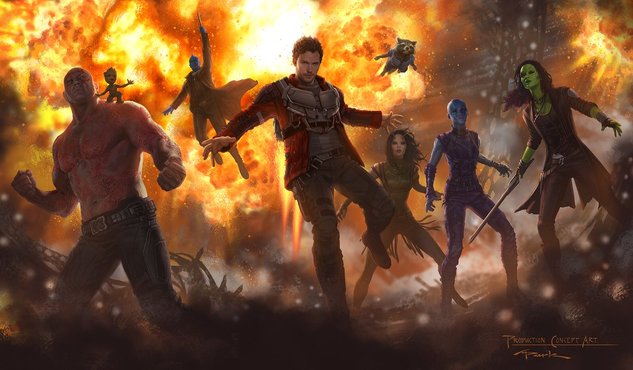 guardians of the galaxy vol. 2