Mainstream Hollywood would love it if we’d all forget that virtually every country has their own film industry, full of gems that deserve widespread recognition. We’ve taken a trip through the international world of dark and delightful filmmaking to bring five recent examples to your attention. Going from Spain to England, Israel to Scotland, and back to America, these are great choices for adventurous viewers in search of indie movies that pack a lasting impression.

The Corpse of Anna Fritz 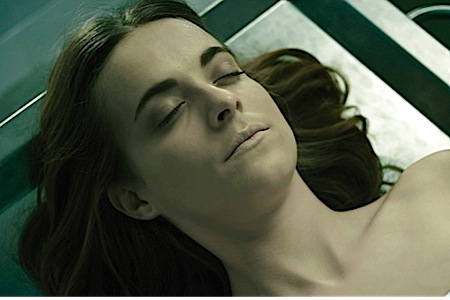 From Spain comes this intimate portrait of stupid guys doing creepy and stupid things with inevitably horrible results. Spanish superstar Anna Fritz is dead, and the country is in shock and mourning. Her body ends up at an unnamed hospital morgue where young, very sexually confused Pau is on shift. So, Pau being young, horny, and apparently prone to incredibly bad life choices takes a pic of the beautiful corpse to share with his two buddies. When they show up, things get so much worse. Barely clocking in at about 70 minutes, The Corpse of Anna Fritz is just as long as it needs to be for maximum effectiveness. It’s a downward spiral of a movie, where you want to shout at the characters to stop being so stupid, yet you know they won’t.

What’s most effective about this mechanism for horror is how authentic it feels. The protrayal of Ivan, the bullying leader of the group, is especially convincing. He’s a despicable prick who cares only for himself, no matter what, and the other characters can’t escape his gravity. The movie isn’t shy about portraying these guys in a horrible and pathetic light, but manages to keep them understandable and, at times, even almost sympathetic. By the time the inevitable end rolls around, however, it’s hard to imagine anyone rooting for them.

Tense and at times uncomfortably disturbing, this is a remarkably well-made morality tale about the importance of consent at all times, even with the dead. 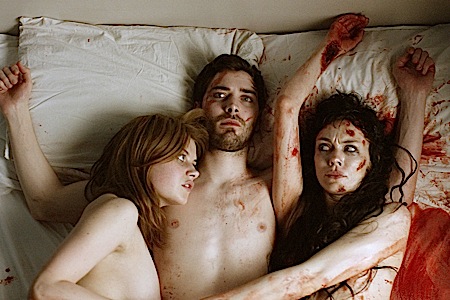 This wonderfully dark and bizarre love triangle from England is the perfect alternative to sappy American romance (and horror). Nina Forever is a mix of a lot of things—comedy, romance, horror, drama—but so superbly written and filmed that it feels fresh. A parable about the dangers of obsession in young love, Nina Forever tells the tale of new lovers, Holly and Rob. Rob is still traumatized from the death of Nina, his long-time lover, and Holly is obsessed with the idea of, if not fixing Rob, at least basking in his dark and tortured soul.

Holly is confused and romantic, and needy for people to appreciate how “dark” she is. The odd thing is how endearing the film makes her. She’s not some annoying goth; she just wants her romance a little too idealized. Rob isn’t much better. He’s so deeply entrenched in his own trauma that he’s put any personal or professional growth on hold and just works a dead end job at the same supermarket as Holly. He’s clueless about taking any action on his own and an ideal match for Holly’s need to cater to her own fantasies.

And then, there’s Nina, who begins to appear in her bloodied and broken state every time Rob and Holly have sex. There’s never any explanation for why Nina does this. Even she doesn’t know. Nina isn’t some horrifying apparition or any ghoul. She’s as much a victim to the situation as Rob and Holly. How the three interact, both in and out of the bedroom, is the crux of the movie, and the expert way Nina Forever picks apart the damaged lives of its characters is surprisingly endearing. 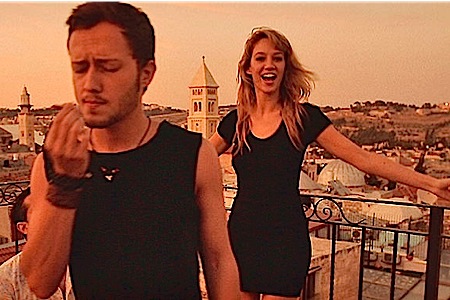 I don’t like found-footage movies, and, frankly, I hate this wave of first-person perspective films we’re seeing now. Yet, with this clever monster outbreak flick from Israel, I’m willing to make an exception. Told entirely from the perspective of a Google Glass-wearing American tourist in Jerusalem, JeruZalem has an incredibly slow build up as it introduces us to the intimacies of its main characters. They’re mostly all likable and engaging, which is the point when the doorway to hell finally opens up and we have to run frantically with them through the streets of a city overrun with zombie demons and into the ancient catacombs below.

Whether JeruZalem is more effective as a gimmicky horror film or 90-minute commercial for Google Glass is up for debate, but the film’s makers aren’t coy about how the technology is used. Skype, Facebook and other apps make plenty of appearances. It’s surprisingly effective, but like so many movies of this type, we’re left wishing to see more of the actual monsters and the epic battle for the Holy Land. Still, it’s far superior to the drudgery of something like Cloverfield, since these characters aren’t completely twits and there are some strong elements of comedy spaced around really fascinating historical elements that add to the overall sense of dread. The ending is a lot of fun, too, so while I still would have preferred JeruZalem had been filmed more traditionally, it’s worth seeing. 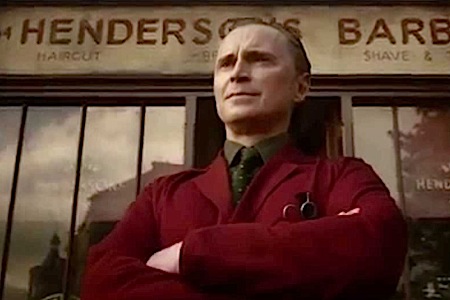 Robert Carlyle has been doing amazing character acting for years now, but for his directorial debut, he hits it right out of the proverbial ball park. This is a surprisingly hilarious black comedy (in the noir sense) about Barney Thomson, a frustrated Glasgow barber whose thus far uneventful life takes an insane turn into serial killing. The whole cast is a terrific comedy ensemble. Emma Thompson is hilariously rank as Barney’s aged and no nonsense mother and Ray Winstone steals his scenes as an extremely angry cop out to solve the gruesome murders of a serial killer who keeps sending the victims’ body parts to their families.

This is a very British (well, Scottish to be precise) sort of picture with refreshingly dry wit, where the more awful the situation, the more hilarious the comedy. Carlyle nails his Barney persona as a confused, depressed guy trying to cope with totally new situations as best he can—which is to say, not very well. The script (based on the novel The Legend of Barney Thomson), moves in quirky fits and starts, with some terrific revelations, even if it sometimes feels dangerously close to descending into cartoonish absurdity.

For those who love some macabre criminal elements in their comedy, though, Barney Thomson is a thoroughly enjoyable and hilarious romp. 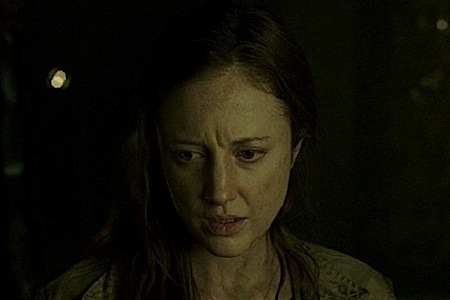 For a more stateside look at slow-burn indie horror, try Hidden. Alexander Skarsgard plays an understated mid-western suburban dad trying to protect his family from some kind of unseen, terrible outbreak. Living with his wife and daughter in a school bomb shelter, he’s forced to deal with a shortage of supplies amidst an atmosphere of fear and tension. Hidden moves really slow, to the point where most of it is a strange kind of domestic drama. The parents spend a great deal of time caring for their daughter, teaching her the new rules of life, playing makeshift board games, and counting canned goods. At one point, a rat getting into the supplies is a huge source of tension for them, but otherwise, it’s almost comedic just how mundane these people are.

This all sounds like criticism, except the climax of this clever twist on standard urban apocalypse tales is so superb that it makes the ponderously slow build up worth it. Hidden isn’t particularly long (around 80 minutes), so it can get away with this level of pacing. The ending is thought-provoking and the characters realistic, making this a nice change of pace from more standard monster movies.

Jason D’Aprile has been covering games and entertainment for the last three decades. In addition to writing for Paste, playboy.com, motherboard.vice.com, and others, he also writes the odd bit of fiction and tries hard to avoid social media.