20 Bands to Catch on the Smaller Stages

You already know whether you’ll be singing along to or willfully ignoring Red Hot Chili Peppers, Radiohead, Phish, The Beach Boys and Bon Iver. But what about all those names in small print at the bottom of the poster? Which of those are you going to regret missing and how do you choose between 9 stages of music and when to hit the hippie market, the Ferris wheel and the Comedy Theatre?

We’ve picked five dark-horse acts from each day we think you’ll enjoy. So catch your favorites on the big What and Which Stages. But don’t miss out on some great shows happening in places like Café Where and the unfortunately named Great Taste Lounge Brewed By Miller Lite. Here are our picks for some of Bonnaroo’s less-hyped acts: 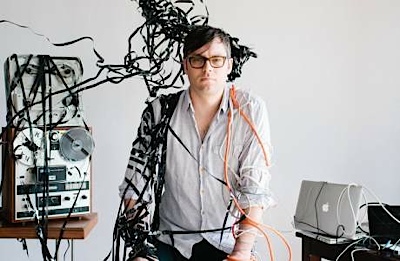 1. Fort Atlantic
The Great Taste Lounge, 1pm
I caught John Black’s new project at the Hangout Fest and was thoroughly impressed. The crowd was tiny, but I think all of us felt like we were in on a secret, as Black and his drummer moved effortlessly from Dawes-like swelling, sing-a-long folk-rock to the two-man blues-rock of The Black Keys. I don’t think this is a secret that’s going to keep long.—Josh Jackson

2. The Cave Singers
The Other Tent, 5:45pm
Seattle’s Cave Singers got their start in 2007 with former members of Pretty Girls Make Graves and Hint Hint, and they’ve been steadily been putting out reverb-washed electric folk ever since. With the recent addition of an incredible bassist in Morgan Henderson, who collaborated with Fleet Foxes for their last album, the band’s rock-solid live show isn’t one to miss. —Tyler Kane

4. Kendrick Lamar
This Tent, 10pm
For the number of 2011 best-of album lists that Kendrick Lamar appeared on for his first commercial full-length, Section.80, you would think he was a seasoned pro. This Dr. Dre protégé found a surprising amount of success before Dre ever came knocking, and things have only gotten better since, as evidenced by collaborations with everyone from Drake and Colin Munroe to ScHoolboy Q. Even the good Doctor has graced a Lamar track with his Midas-like touch. Songs like “No Makeup (Her Vice),” “A.D.H.D.,” and “The Recipe” ought to please even the pickiest crowds at Bonnaroo.—Patricia Miranda

5. Phantogram
The Other Tent, 10:15pm
If you’re ready for something besides hip hop at this point, I’d recommend the New York duo who recently backed The Flaming Lips when they played Dark Side of the Moon. —Josh Jackson 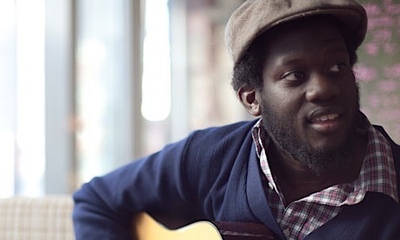 1. Michael Kiwanuka
That Tent, 12:15pm
Coming to Bonnaroo straight off tours with past festivals must-sees Adele and Mumford & Sons, this British singer/songwriter’s blend of bluesy-soul and rootsy-rock has many comparing him to Otis Redding and Van Morrison. Playing songs off his debut album, Home Again, his modern mix of classics sounds is a great way to start off the second day of the festival.—Lindsey Hughes

2. Rubblebucket
Sonic Stage, 2:15pm
Rubblebucket subscribes to the Flaming Lips philosophy of making sure its audience doesn’t forget what they just saw. At SXSW, giant puppet robots invaded the crowd as the eight Brooklynites on stage got everyone dancing to tunes like “Came Out of a Lady.” Expect something completely different but just as creative from the art-dance band at Bonnaroo.—Josh Jackson

3. Katie Herzig
The Great Taste Lounge, 2:40pm
There’s a childlike wonder that weaves its way through Herzig’s songs, but jobs writing for movies and TV have added a more intricate cinematic quality to her latest album The Waking Sleep. It’s lovely music, a perfect respite with the sun still shining overhead on a day that’s bound to be filled with noise.—Josh Jackson

5. Robert Ellis
The Solar Stage, 7:45pm
Robert Ellis and his band first wowed us at CMJ last year with their live show, which expertly blends Ellis’ country, folk, bluegrass and rock influences. One minute, he’ll get you teary with a George Jones-style ballad, and the next he’ll tear the roof off the joint with a raucous, experimental take on the bluegrass standard “Ruby.” He’s hot off an Americana Music Association nomination for Emerging Artist of the Year, and it’s no wonder—Ellis’ energy onstage transformed the dark New York club where we held our party into a country honky-tonk, and we’re dying to see what he can do under the Tennessee sun.—Bonnie Stiernberg 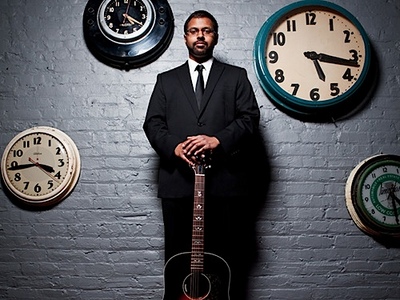 1. Bhi Bhiman
Café Where, 2pm
First, there’s the music: a spirited, multi-cultural stylistic stew blending soul, vintage country, West African folk and hippie-fied bluegrass. Then there are lyrics: colorfully drawn narratives about optimistic train-bound hobos, blissfully ignorant rednecks, and jilted lovers—told with both sharp wit and heavy heart, realizing, “The reason why something is funny to people is because there’s some sort of tragedy behind it.”—Ryan Reed

2. Hey Rosetta!
Sonic Stage, 2:30pm
Canadian six-piece Hey Rosetta! has the ability to blend traditional indie instrumentation with eloquent strings of a chamber orchestra. They were short-listed for the Polaris Music Award, which is given to the best full-length Canadian album, twice. Songs like “Yer Fall” are slow-building piano- and string-driven ballads before turning into an ambient experiment filled with heavy distortion and enough sound to fill an entire arena.—Adam Vitcavage

3. Trampled By Turtles
Sonic Stage, 3:15pm
Minnesota quintet Trampled By Turtles is what happens when members of various punk and rock bands get together to start a bluegrass group. Originally forming in 2003, the band channeled their punk-inspired energy into acoustic instrumentation—including acoustic guitar, banjo and fiddle—which has earned them a devoted live following.—Hilary Saunders

4. Oberhofer
Sonic Stage, 4pm
Down toward the bottom of the Bonnaroo billing is Oberhofer, an energetic pop quartet from New York by-way-of Tacoma, Washington. As the name suggests, Oberhofer begin and end with frontman and songwriter Brad Oberhofer. Behind the strength of his 2010 self-recorded single “oOoO,” he signed to Glassnote Records, who released the band’s debut full length, Time Capsules II, earlier this year. But where Oberhofer really impresses is on stage. Though the music skews toward the pop-ier end of the spectrum, their shows are surprisingly raucous and might provide an easy cure for the pre-dusk festival doldrums if you can catch them on a smaller stage.—Ryan Bort

5. Gary Clark Jr.
Sonic Stage, 5:30pm
This skilled blues revivalist is quickly gaining national attention (and rightfully so), but the Austin native has been a hometown hero for years. Way back in 2001, Mayor Kirk Watson declared May 3 to be Gary Clark, Jr. Day, in honor of the then-17-year-old guitar whiz. Clark will likely be wowing the Tennessee crowd with cuts off of his latest, 2011’s Bright Lights EP.—Bonnie Stiernberg 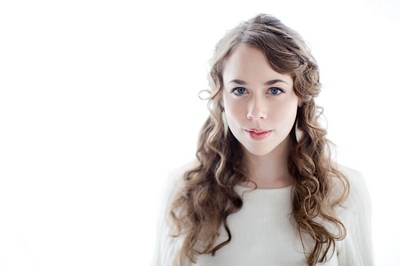 1. Sarah Jarosz
The Other Tent, 12pm
Six days after she releasing Follow Me Down last year, Sarah Jarosz turned 20. Releasing a record to that much fanfare is accomplishment enough at that age, but it wasn’t even her first go round. The album marked her second release on Sugar Hill Records, a label famed for repping the best and brightest of America’s acoustic scene. Without a doubt, the now-21-year-old Jarosz is both and she’s chosen to assure she stays that way by attending the New England Conservatory of Music.—Ashley Melzer

2. Grouplove
This Tent, 2pm
At last year’s DeLuna Fest, we watched Grouplove’s Christian Over transform from an introverted young man offstage to an energetic frontman with a knack for theatrics, while his bandmates followed suit. The energy was raw, and the crowd was compelled to sing and dance along as frantically as musicians on stage.—Adam Vitcavage

3. The War On Drugs
This Tent, 3:30pm
Led by Adam Granduciel, The War on Drugs has a style reminiscent of rockers from days gone by. Their dreamy, languid vocals call to mind musical legends such as Bob Dylan, while their guitar work fits right into the framework of the ’70s. The Philly band formed back in 2005, and has since produced two full-length studio albums. If you’re looking for a place to start, pick up Slave Ambient and try “Best Night” or “Come to the City” on for size.—Megan Farokhmanesh

4. Here We Go Magic
Sonic Stage, 4:45pm
A tussle between bedroom candor and soaring, polished arrangements has resulted in Brooklyn five-piece Here We Go Magic’s metamorphosis from an outfit occupying the nooks and crannies of psychedelic circles to a glossy collective. Thom Yorke praised the group as his favorite act of Glastonbury, and Radiohead producer Nigel Godrich jumped to produce their fourth release after catching a particularly rousing set.—Carey Hodges

5. The Joy Formidable
This Tent, 5pm
The Big Roar couldn’t be a more aptly titled debut for The Joy Formidable. The album’s first song “The Everchanging Spectrum of a Lie” is such a tidal wave of crashing drums, heavy guitar and lead singer Ritzy Bryan’s harsh/soft vocals, that it’s exhausting by the time it’s over. Joy Formidable sounds like a band made for large arenas and even larger crowds. Fittingly, Foo Fighters chose them for their arena-packing tour last year; it’s hard to imagine any stadium not left a little shaken even before Dave Grohl and co. took the stage.—Ross Bonamie