The ritual of the Olympic flame is an extravagant, storied tradition, a multi-month event meant to exemplify the host country’s sense of style, ingenuity and creativity.

It’s also arguably one of the most bizarre things the world collectively gets together to take part in. For several months, a small flame is placed under heavy guard and transported across the world just to light a giant cauldron that physically powerful people play sports under for weeks.

The tradition is only 20 years shy of officially being a full century old. In that time, some fairly bizarre things have happened with the little flame that could, often at the fault of its handlers and organizers.

So, with the current flame racing around the Brazilian countryside (and nearly getting doused) while Rio figuratively burns in economic and social collapse, let’s take a look at some of the strangest things that ever happened with the Olympic torch. 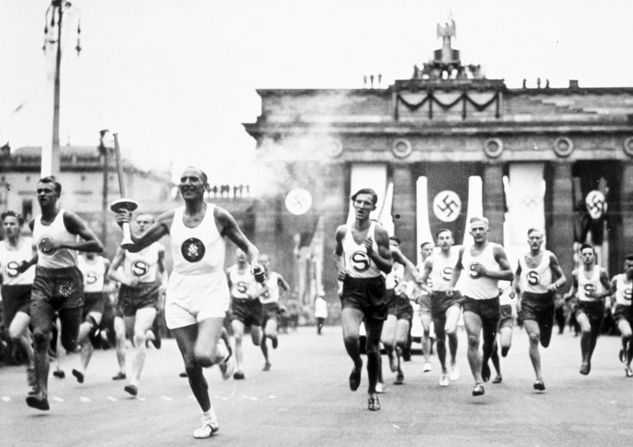 1. The Olympic Torch Relay Has A Rather Evil Origin Story

The symbolism behind the Olympic torch is stepped in ancient Greek history, as every Olympic flame is ignited during a special ceremony in Olympia, the site of the original Olympic games. However, the relay itself recently celebrated its 80th birthday after getting its start in the Berlin Olympics of 1936.

Yep, the modern Olympic relay as we know it got its start during the rule of the Third Reich as a blatant PR attempt to show the strength and vitality of the Aryan athletic prowess. Further, the first relay route wound its way through southeastern Europe in an effort to showcase the Nazi’s growing influence.

After this rather dark start, the torch relay and Olympics wouldn’t return for another decade due to a small conflict known as World War II. When the games remerged in 1948, the subsequent relay was dubbed the “relay of peace.” And the torch relay remained. 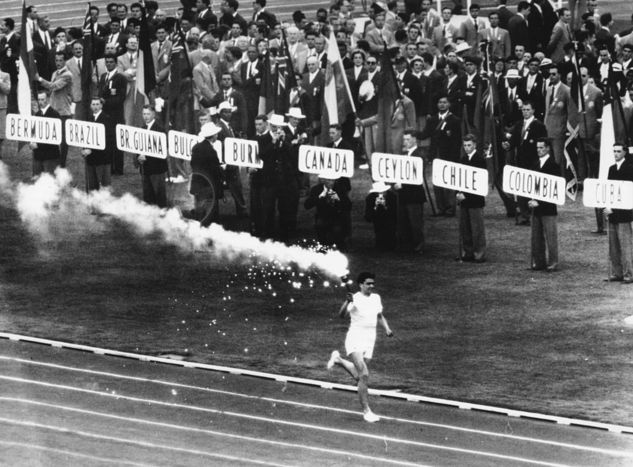 2. An Aussie Fooled Most of Sydney With A Fake Torch In 1956

The Olympics are often filled with political tension, probably due to the fact that it forces opposing world powers to play nice with each other for several weeks at a time. While protests are often seen during the build-up during the games, one politically minded college student made his point using nothing but a pudding can, a painted chair leg and kerosene-soaked underwear.

In 1956, veterinary student Barry Larkin plotted with eight of his University of Sydney peers to protest the Games by fooling the gathered crowd with a fake torch during the flame’s run through Sydney.

In fact, their flaming underwear fake was so convincing, Larkin managed to trick the crowd and police into thinking he was Harry Dillon, a Vaudeville legend and the scheduled torch bearer. Larkin managed to deliver the torch into the unwitting hands of Sydney Mayor Pat Hills who began a prepared speech while holding the fake. Just as a dutiful official informed the mayor on what he was actually holding, Larkin had managed to blend in and escape through the crowd. The merry prankster later received a standing ovation from his peers as he stepped into a class later that morning to take an exam. 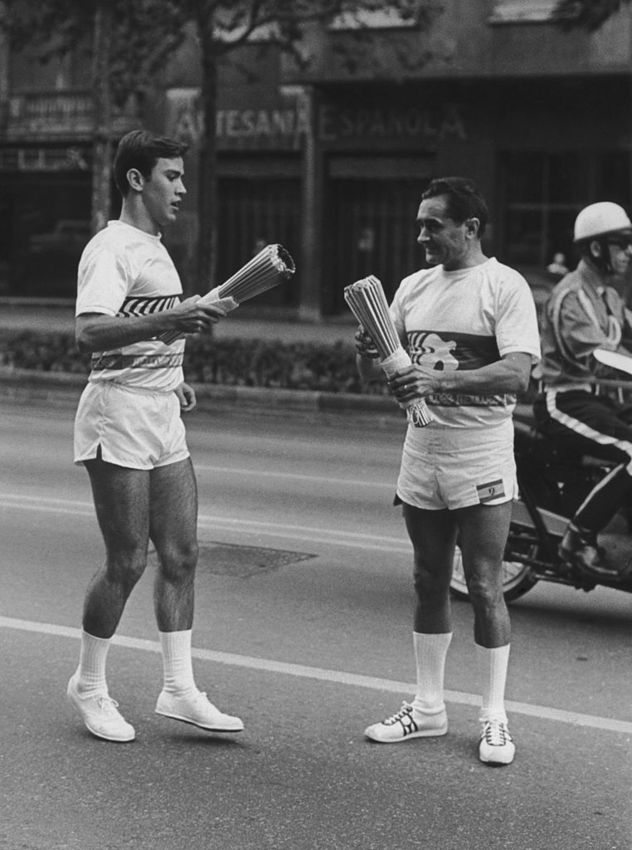 For running around with a large open flame, most of the harm or threat that occurs to runners often comes from outside forces rather than the torch itself. However, during the 1968 Olympics, passing the torch from one runner to the other literally backfired. As one runner passed his flame to the unlit torch of his partner, the rapid contact and exchange of fuel sources caused the torches to explode and injure the runners. The problem was later corrected, and despite a rather overzealous torch caught on camera during Sochi’s run, has ceased from happening.

4. The Torch Has Been Relit Using A Cigarette Lighter More Than Once

The whole point of the normally epic relay race is to transport the same flame that started in Olympia through an extravagant route that eventually ends with the cauldron of the official host country. Given all of the things that can happen to a flame in that time, normally multiple copies of the fire are kept close and contained in the instance someone or something snuffs it out.

During the 1976 Montreal Summer Olympics, heavy rains doused the flame while it was in its cauldron during the games. Rather than reach for one of the backups, an intrepid official opted for a quicker and more efficient means to reignite the passionate symbol…his cigarette lighter.

This non-Olympic flame was quickly doused and replaced with one of the back-ups.

However, during the Sochi Winter Olympics two years ago, the torch had just barely left the interior of the Kremlin in Moscow before the flame was snuffed out by the wind. When the runner called for aid, a similarly practical, tradition-damning guard rushed over to relight the flame…with the flick of his old-school flip lighter. 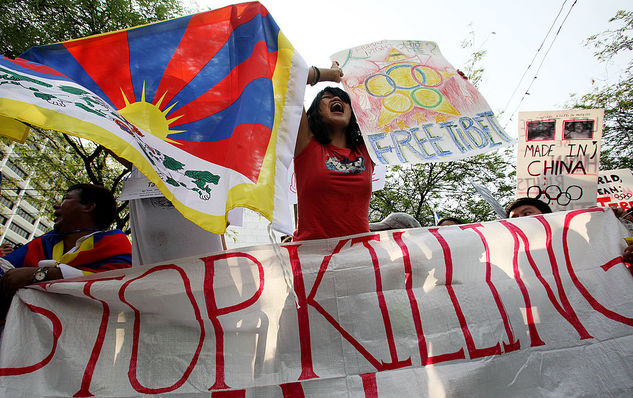 5. The 2008 “Journey of Harmony” Ended In Massive Protests

Up until 2008, the Olympic torch could go on whatever hair-brained journey the host country’s Olympic committee could think of, as long as it started in Olympia and ended in the cauldron at the host’s Olympic stadium.

Before the 2008 Beijing Olympics began, the relay organizers planned a massive, 85,000 mile trek around the world. The relay spanned all six continents (a feat previously accomplished in 2004), including the summit of Mt. Everest. This globe-trotting trek, initially dubbed the “Journey of Harmony,” turned out to be anything but.

With the People’s Republic China as the host, massive “free Tibet” and human rights protests erupted during several relay stops, including one particularly chaotic demonstration in Paris. The torch was extinguished several times during the relay months, most often by security officials for protection purposes.

Due to the rampant unrest, the IOC implemented a new rule stating that all future Olympic relays could only cross through Greece and then through the host country. 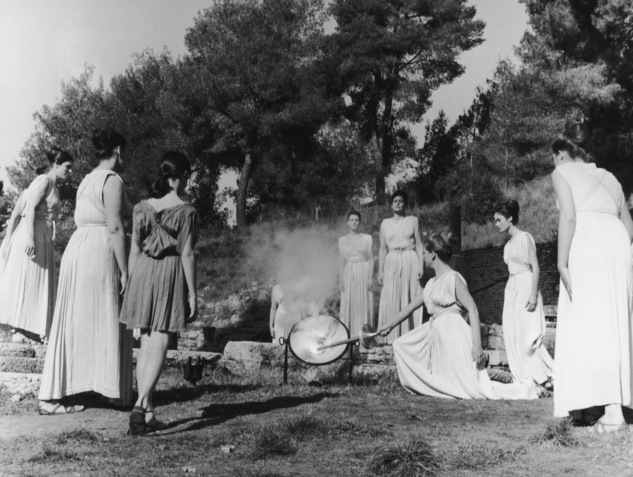 6. Montreal Lit the Flame Using Satellites and Lasers From Athens in 1976

While the treks around the world were impressive if not impractical, the most futuristic of torch passes occurred during the 1976 Montreal Olympics. Rather than carefully transport the original flame and several copies from Greece all the way to Canada, the Olympic committee had an even better idea: beam it.

Per tradition, the flame was lit in Olympia and runners took it to Athens. However, a satellite then performed the rest of the human leg work by ionizing the flames’ particles and beaming them to a satellite, which then sent the signals to activate a laser in Ottawa that ignited the flame.

No, that actually happened and still totally counts. The science-fiction-made-reality flame was then carried from Ottawa to Montreal’s Olympic stadium to officially begin the games. 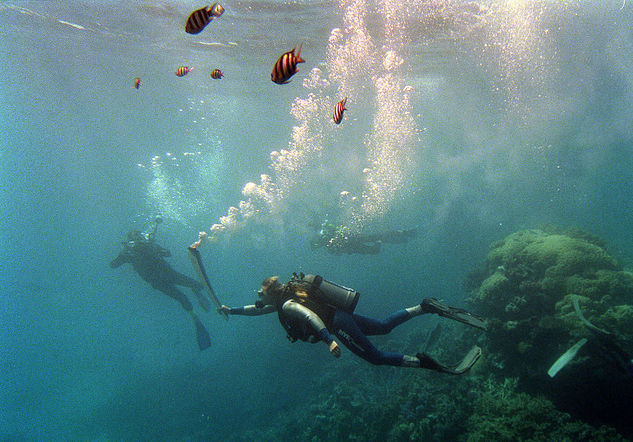 7. Sydney Took the Torch Where No Flame Has Gone (Or Can Ever Go) Before

As mentioned, the Olympic torch has been all over the world. It’s also been in places where it shouldn’t be possible for it to continue existing.

In 1996, a replica of the Olympic torch went up with astronauts aboard the Columbia, a feat replicated in the 2000 and 2014 races.

The torch has also explored the murky depths of the ocean. During the 2000 Olympics in Sydney, perhaps given the fact that the world had indeed survived Y2K, the committee wanted to take the spectacle of the trip even further.

So, Marine Biologist Wendy Craig Duncan carried a specially designed flare torch into the fucking ocean and swam with it for three minutes near the Great Barrier Reef. According to reports, the flare was designed to look as aesthetically similar to the lit torch as possible and did indeed contain the same fire from Olympia.

In 2014, perhaps to offset how rough a start Sochi got, the torch visited all parts of Russia, including the bottom of Lake Baikal in Siberia.

Reed Strength is a current editorial intern for Paste who would probably stop, drop and roll if ever handed an Olympic torch for some ill-advised reason. You can follow him on Twitter @ReedStrength for more Olympic weirdness and guitar music obsession.