Unlike many luxury and sports sedans on the market today that cater to the needs, comfort and wishes of the driver, Cadillac is breaking the mold with the introduction of the CT6 by building a car designed for passengers. Like its contemporary rivals, the CT6 still comes packaged with all the modern technology to keep drivers safe and happy when they take the nimble four-door out on the road, but the vehicle comes packed with an array of consumer technologies designed to keep passengers in the backseat entertained. The CT6 ushers in an era where your passengers may not want to even leave the car, let alone utter that annoying question of “are we there yet?” on a long road trip.

That’s not to say that the needs of drivers are ignored. You’ll get all the modern conveniences of assisted parking, pedestrian detection on the road, and collision avoidance and lane departure systems along with a loaded dash that comes with support for Apple’s CarPlay or Google’s Android Auto ecosystem. In addition to the smartphone tie-in, the CT6 also comes with General Motors’ CUE infotainment system for moments when you want to disconnect and just enjoy the ride. 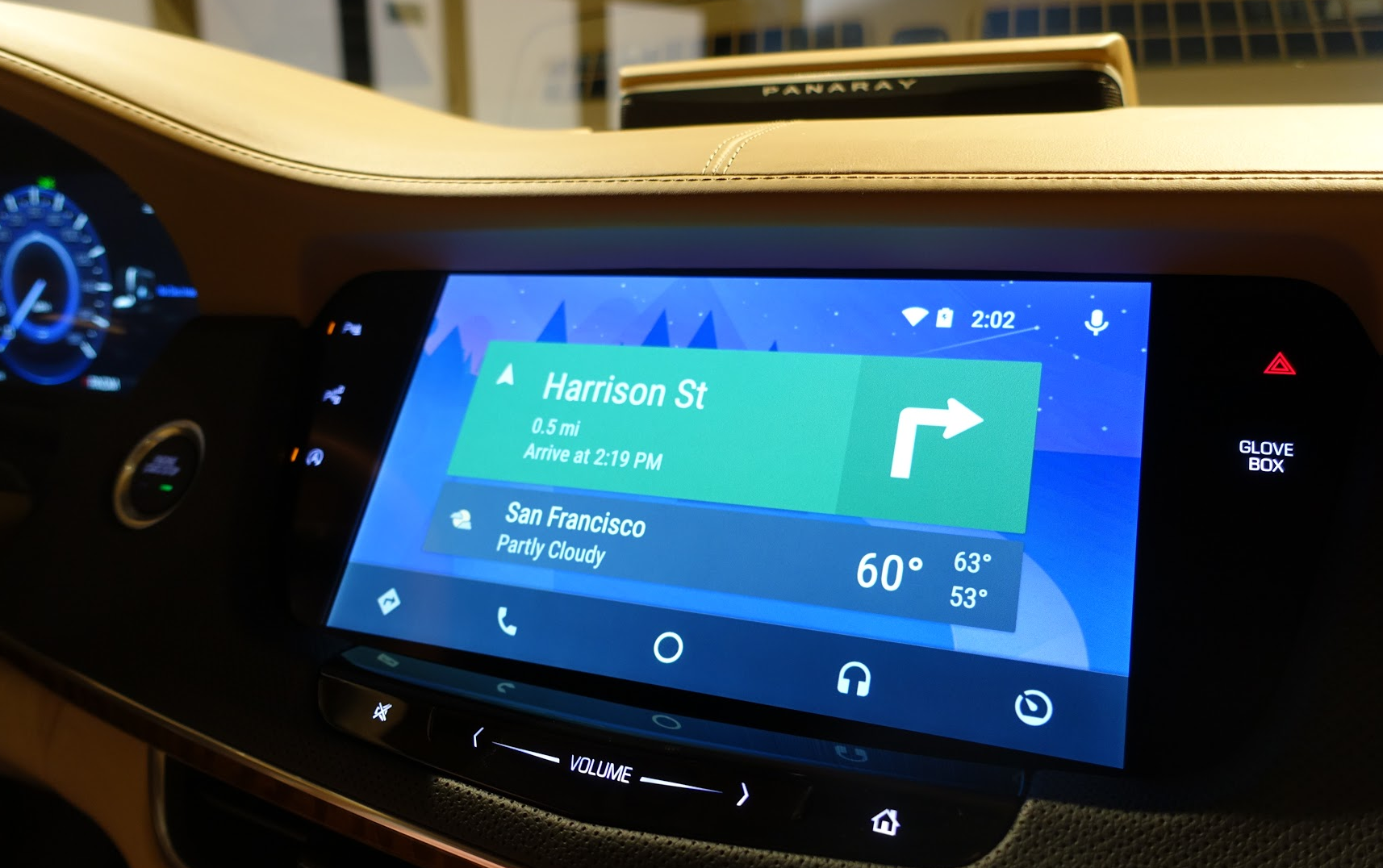 It’s all about choice, a General Motors spokeswoman told me, and that’s why the CT6 offers support for both iOS and Android in the car. Recognizing that consumers want to stay connected while the car, GM and its Cadillac subsidiary wanted to bring that integration in a safe, convenient and easy manner.

Another benefit of leveraging the smartphone is easy over-the-air updates. This allows Cadillac to offer rapid updates, similar to app updates on the phone, for music streaming, mapping and music streaming experiences, while having a very controlled car experience through CUE.

In fact, Android Auto and CarPlay resides as an app inside the CUE interface. Once you power on the CT6, CUE pops up and gives you access to popular controls in the car, like changing the radio, adjusting the cabin temperatures and more. You can navigate these controls with the 10.2-inch touchscreen, similar to how you would on an iPad. However, to make it convenient for drivers, there’s also a touchpad in the center console right by the shifter.

Once you plug in your phone, you can connect to either Android Auto or CarPlay, depending on your phone model. However, with these modes enabled, the touchpad is disengaged, and you’ll have to solely rely on the touchscreen for navigating the UI. CarPlay and Android Auto brings some nice extras to your in-vehicle experience, giving you access to more streaming music apps, for example, and the ability to quickly and easily respond to text messages using your voice.

For smartphone owners with Qi-enabled smartphones, a wireless charging pad is found in the front, but not in the rear for passengers. Unfortunately, though, you’ll still have to plug in for now if you use CarPlay or Android Auto, as the screen mirroring technology still requires a wired connection.

Party in the back 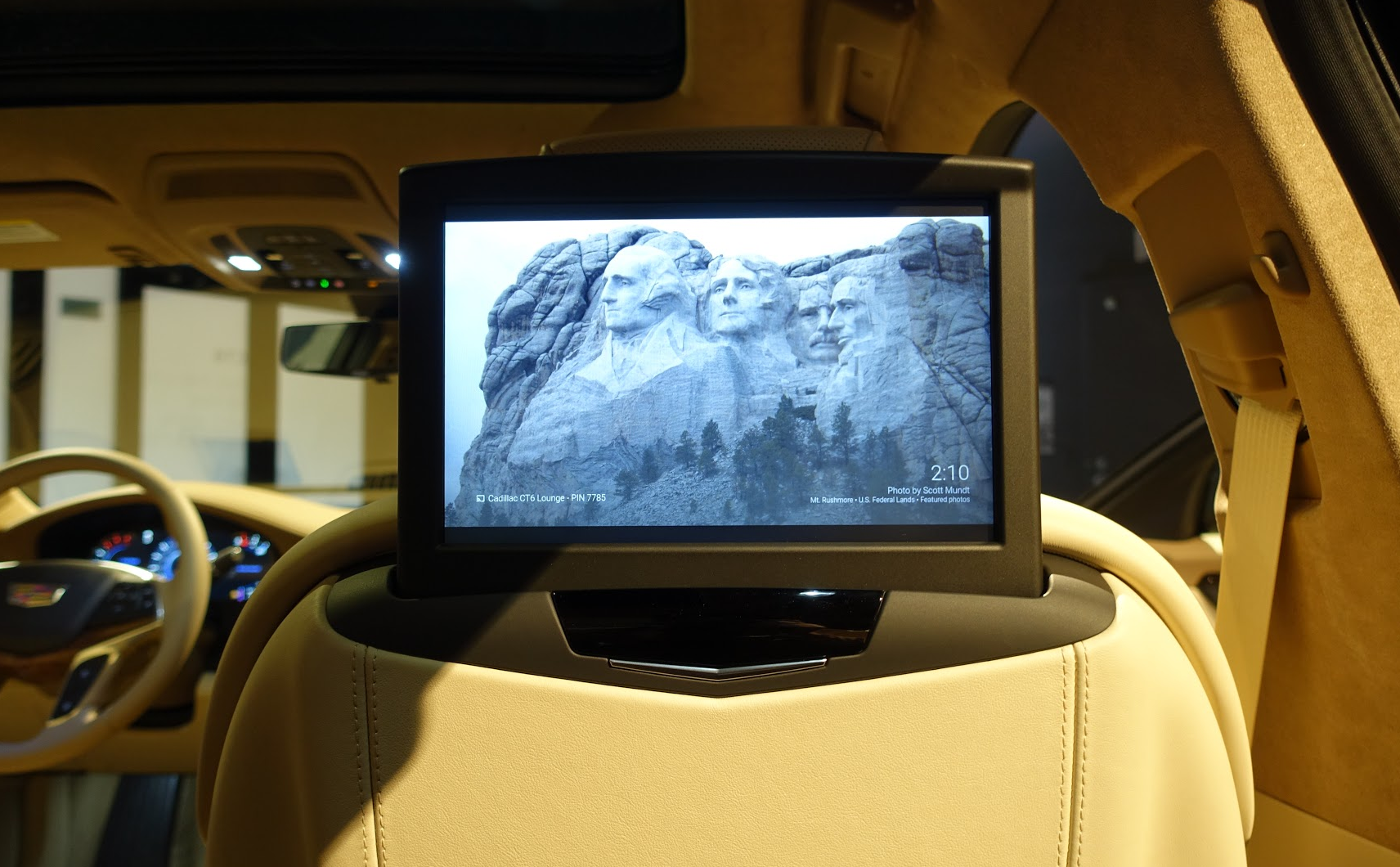 While the CT6, and by proxy Cadillac’s heritage, may spell business in the front, the CT6 is all about the party in the back. For rear passengers, there are two 10-inch screens in the back. When you’re ready for the in-car feature presentation experience, the screens glide up from the rear side of the front seats, and you can further recline the passenger seats for a more comfortable viewing experience.

Sadly, though, you’ll have to bring and supply your own chilled beverage. The CT6 doesn’t come with any refrigerated compartments in the back to chill or stow your favorite juices, sodas or beverages.

While the rear screen may not be new to car entertainment, the connectivity options are. You have access to an HDMI port, a full home power plug and a few USB ports for charging. This means that you can connect a Google Chromecast, for example, and beam content from your smartphone for viewing on the screens. This allows you to watch videos, view photos and stream movies from the smaller screen of your phone to a more comfortable display in the CT6.

In a demo, Cadillac representatives showed off the streaming quality from an iPhone 5S to the CT6’s rear screens. Video quality looks good, and I didn’t notice any stutters or buffering for both video files that were locally stored on the iPhone’s memory as well as video that were streamed from the network.

For safety reasons, content shown on the screens in the backseat won’t be viewable to the driver on the center console.

Additionally, given the full power outlet, you can go as far as connecting an Apple TV, Roku box or even a game console like an Xbox One or Playstation 4 and geek out. You can even play internet-connected games using the entertainment system in the rear with the optional LTE package for the car.

Surprisingly, none of the Cadillac representatives that I spoke with in San Francisco had tried to plug in a console for some Grand Theft Auto action while inside an auto!

Audio can be piped out of the CT6’s theatrical-quality stereo system or enjoyed privately with the Cadillac-branded headphones. The headphones come with noise isolation to seal out the surrounding noise, so if you’re enjoying a movie in the back, the driver can still jam out in the front and listen to voice guidance for navigation using the car stereo.

Another part of General Motors bringing more connectivity options to the car is allowing you to stay connected at a relatively affordable price.

As part of the OnStar experience GM partnered with wireless carrier AT&T to deliver 4G LTE connectivity to the Cadillac CT6. For $40 a month, a Cadillac spokesman informed me that AT&T will offer unlimited data for use inside the car, which will come in handy if you’re constantly viewing Netflix movies or YouTube clips in the rear.

Essentially, the car gets its broadband data from AT&T’s LTE network, and then it creates its own WiFi network to share that data with your devices. The driver’s phone, can get updated navigation directions and stream music from Pandora using this unlimited package, while rear passengers can connect to the CT6’s WiFi to stream Netflix shows and movies. 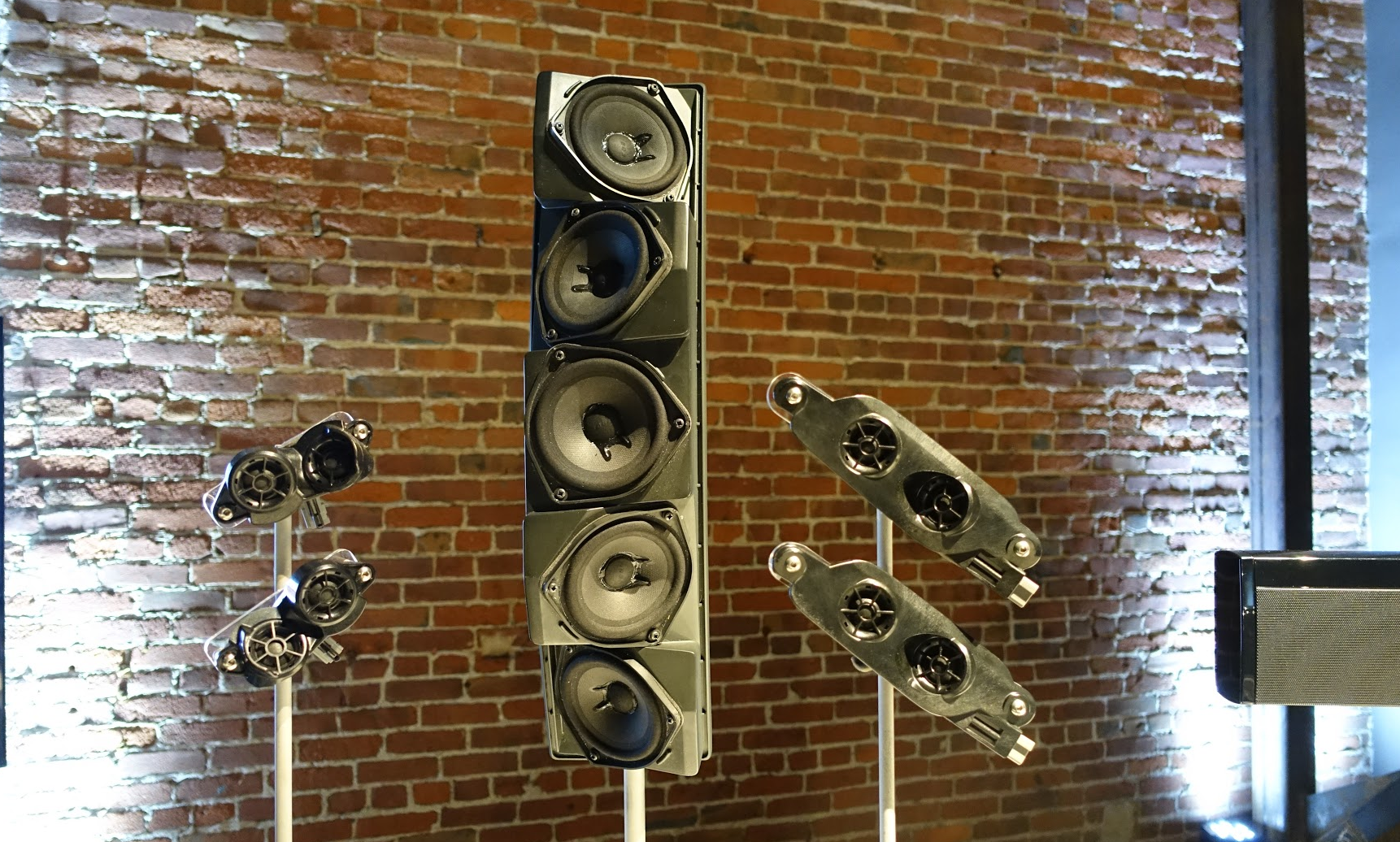 The speakers are located throughout the car, and I found that no matter where I sat, the stellar sound quality remains largely unchanged. Whether you’re a driver, a front-seat passenger or a business traveler enjoyed a chauffeured experience in the rear, you’ll hear great sounds with the strategically placed speakers.

The Panaray system delivers a wide soundstage with great highs and mids, and the under-seat speakers and subwoofer pumped out clean bass that wasn’t muddied. Even at higher volumes, I didn’t notice any distortion.

The collaboration means that the audio giant and Cadillac had to work closely together to design a system with proper airflow and speaker arrangements, a Bose spokesman informed me.

And despite how loud and immersive the listening experience is on the inside, surprisingly, the car is well insulated so that sound doesn’t leak outside. This means that I could jam to some embarrassing tunes and no one would be the wiser. In the cabin, the engine noise isn’t even audible.

From Surround Sound to Surround Vision 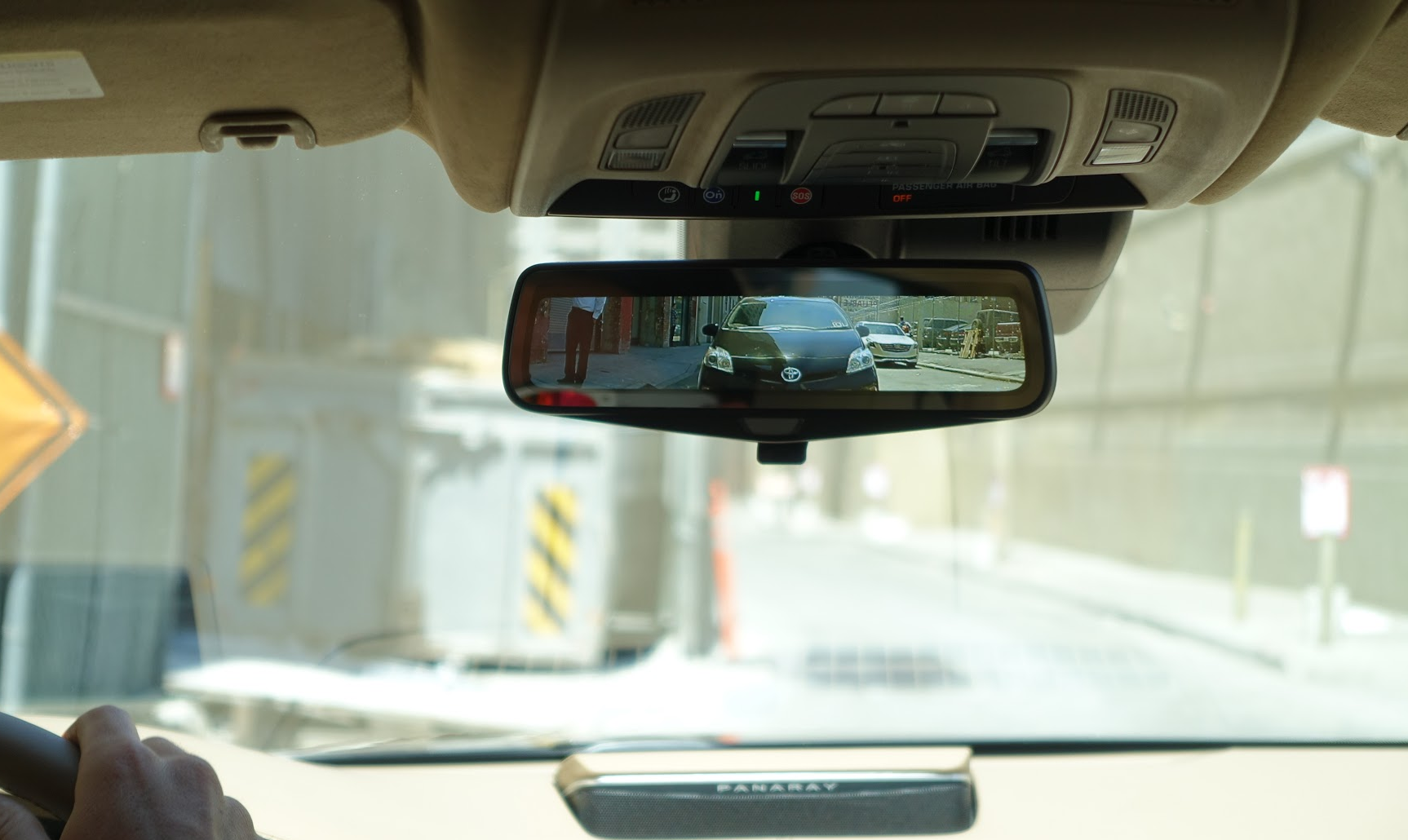 The CT6 also packs an array of cameras providing 360 degrees of surveillance to keep your ride secure. There are seven exterior cameras that can engage if the vehicle senses it is being broken into or to record accidents and incidents. If you’re taking the car out for a fun ride on the Autobahn, you can even record your drive.

The benefit of the Rear Camera Mirror is that you can see a wide-angled, unobstructed view of what’s happening on the road behind you—headrests and rear passengers won’t be obstructing your view.

Stuck Between the Present and the Future 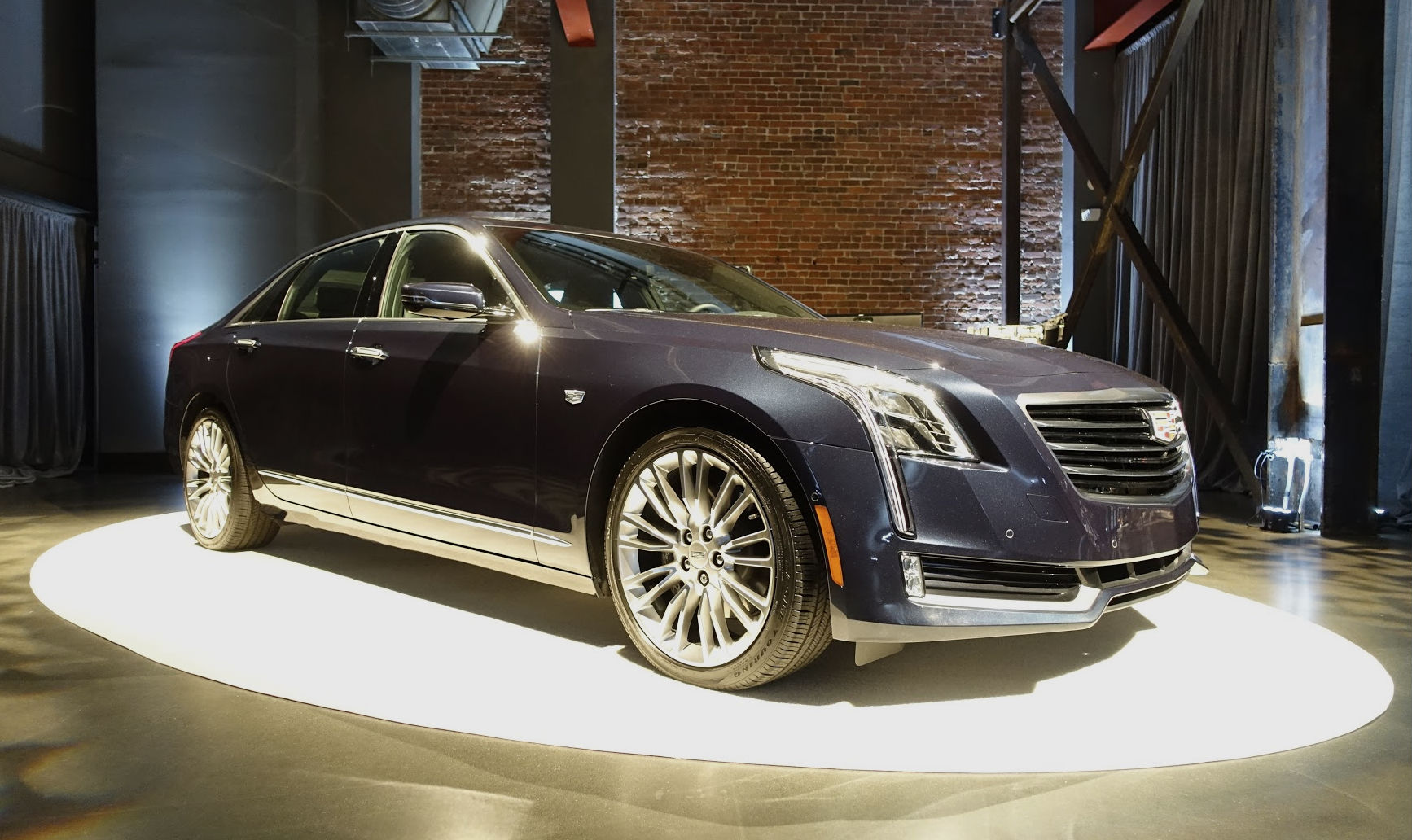 With its amenities, the CT6 represents Cadillac’s vision of modern luxury—a well insulated cabin, an amazing audio experience to keep drivers comfortable and technology to keep passengers entertained. Yet, despite the driver-focused features, the CT6 is a car that’s designed for passengers, and this places the 2016 model at the cusp of change in the automotive space.

The CT6 is a car that’s more fun when you’re being driven in it, and the 2016 model sets the stage for Cadillac’s plans to enter the semi-autonomous and self-driving vehicle markets. Cadillac said that a semi-autonomous model of the CT6 is coming next year, so hopefully, drivers can be relaxed enough to enjoy the immersive music experience as rear-seat passengers.

The only unfortunate thing about the 2016 CT6 is that Cadillac doesn’t sell a model with a driver included. Unfortunately, that means you won’t be able to enjoy some of the rear-seat amenities while on a roadtrip. But even if you’ve been cast for the part of designated driver in the game of life, rest assured that when the CT6 is parked, you can turn Cadillac’s ultra luxurious sedan into your own man cave—just remember to bring that six-pack to the rear seat before you wire up that Xbox One and enjoy your game play with Bose’s theatrical-quality Panaray system.