Projectors have always been an interesting method to display media. I grew up with them in school and saw plenty of them in college dorms, but never really had one to call my own. I had the chance to test out the RIF6 Cube recently, and I have to say I see the appeal.

When I first took it out of the box, I couldn’t believe how tiny it was. Measuring in at just a few inches on each side, the Cube truly is so portable that you could fit it in your pocket. Given that the battery clocks in at roughly two hours (tested) you don’t need to lug around all of the wires as well, and the stand will fit in either a small bag or a big pocket as well. I expected it to be a fragile little thing but it seems sturdy enough, and the lens is well protected.

The picture quality is not 1080p (native resolution is 854×480), but again, the selling point of this unit is convenience, and at its size, the picture is excellent, even if you aren’t using a projector screen and are running it right on the wall.

To test this, I found that projecting it on a surface up to 90 inches (measuring diagonally, naturally) retains its picture quality—beyond that, it starts to fade a bit. It comes with a stand that’s actually one of the best I’ve seen, as each individual leg that forms the tripod can be molded and shaped at will. They’re both sturdy and flexible, and the mount itself is very high in quality. 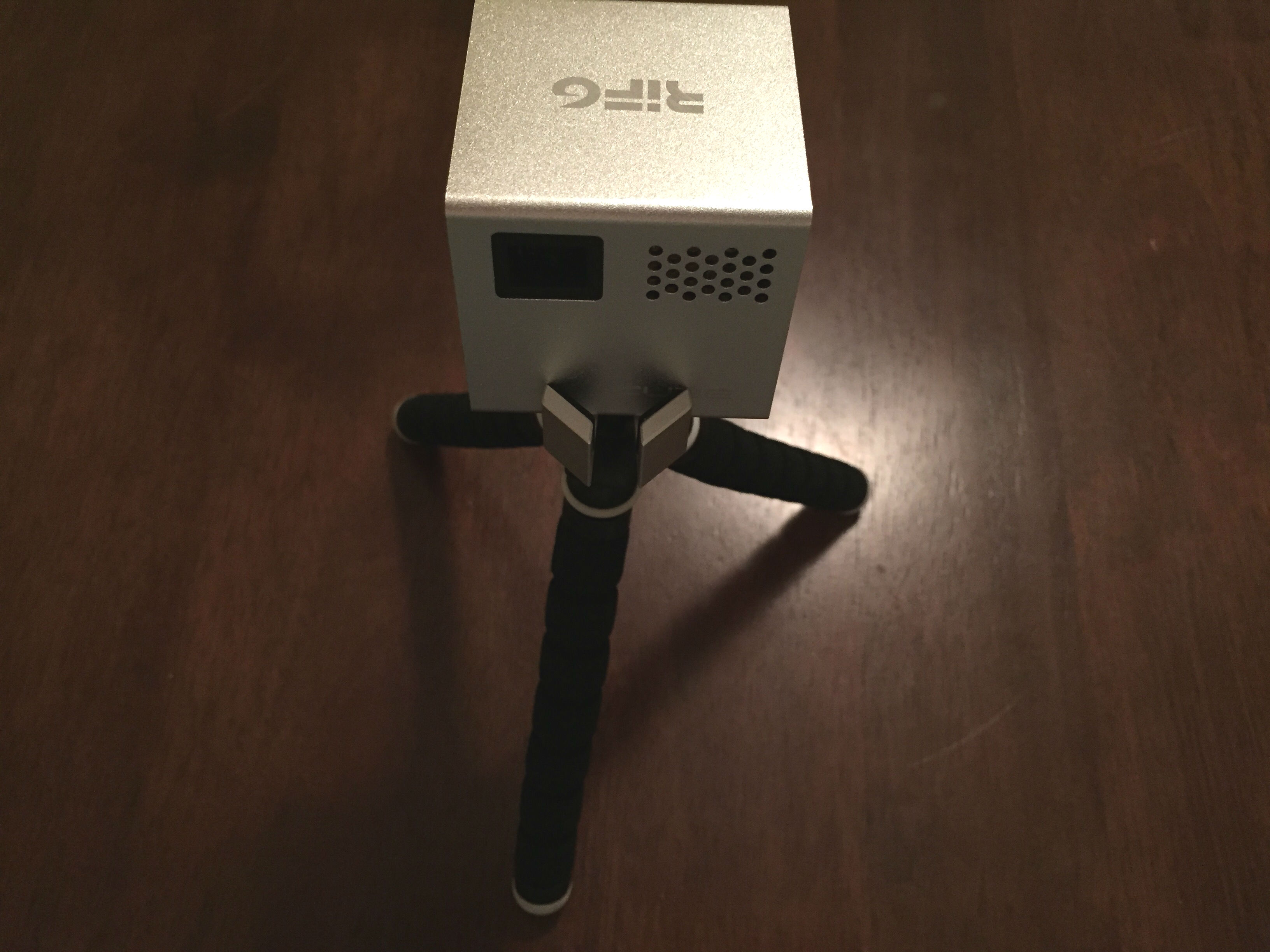 With a small size comes great responsibility though, as the speaker isn’t loud enough to boom throughout the room. As such, it has an audio jack, which can support headphones or speakers. Personally I hooked up my Bluetooth-ready speaker manually and had no issues, as the volume could be controlled by way of the RIF6’s remote and the sound box itself. It’s a bit wonky to have all of these wires flowing out of a tiny box, but it works.

The only trouble you’ll really run into is when you’re attempting to stream content from a mobile iOS device. In short, you’ll need a pricey cable (it usually runs $40 or more) on top of the RIF6 itself. That’s a massive inconvenience, but more-so Apple’s issue than the Cube’s manufacturer. If you have any Android devices it’s as simple as plugging them in and you’re good to go.

A tiny knob on the side allows users to focus in the picture (it only took a few seconds to do), and there’s a MicroSD slot if you want to just share basic video and images—like an old school family slide show. As easy as it is to set up, it’s just as simple to charge it. Note that you’ll need to use the included power source to charge it while it’s in use, but otherwise, any 5V/1A or 2A adapter will work.

Before you drop nearly $300 on a projector you’ll have to really assess your needs (do you have a wall that can support it for instance, or an outdoor setup is possible). But if you can find a use for it, The Cube is a safe buy. The form factor really opens up your possibilities, as I can see it being useful in an office situation for on the spot presentations, and much more.