I made a lifelong commitment in my 20s to keep partying, stay young in spirit and never talk about feeling old. As part of this plan, I started a three-year backpacking trip at age 39, and for the big 4-0, I committed to climb Mt. Kinabalu in Malaysia. I viewed the two-day trek as an opportunity to prove I was still young. I finished my 40th having never felt older.

Malaysia is a Southeast Asian country split in two parts: The mainland drops into the South China Sea below Thailand, while Malaysian Borneo makes up the northern half of an exotic island shared with Indonesia and Brunei. Borneo is the largest island in Asia, and Sabah state on its northeastern edge claims magnificent shark diving, the first episode of Survivor and Borneo’s tallest peak, Mount Kinabalu. The 13,435-foot mountain gave Malaysia its first world heritage honors in 2000 with UNESCO writing, “The highest mountain between the Himalayas and New Guinea… has a very wide range of habitats, from rich tropical lowland and hill rainforest to tropical mountain forest, sub-alpine forest and scrub on the higher elevations.”

My Malaysian bucket list included eating chicken in Penang, diving off Sipadan and watching the sunrise from atop Kinabalu. Prepaid reservations are necessary to procure a dormitory bed and one of the 135 climb permits available each day. I arrived at the Timpohon Gate entrance on the morning of my 40th birthday, and the park office paired me with one of the mandatory guides lined up like taxis outside an airport.

“My name is John,” said the guide, an older gentleman with solid English-language skills. His name probably wasn’t John, but I certainly would have butchered his birth name like most phonetically challenged Americans. “Are you ready to climb?”

“Absolutely!” I proclaimed with zealous naïveté.

I wore black sweatpants, a white tee and running shoes, but I knew the temps would change fast, so I packed a black sweatshirt, sunglasses, knit gloves, a winter beanie, a camera, socks, underwear, sunscreen, energy bars and a water bottle I could refill at various points along the way. At about 10,700 feet, I would spend the night at the Laban Rata guesthouse, one of several on the mountain associated with different booking agencies.

“Where are you from?” my guide asked.

“Born and raised in Los Angeles, but living in New York City. You are from Malaysia?”

“I live in Borneo,” he explained. “I work as a farmer, but during the high season, many of us come here to work a guides. We make more money taking people up the mountain.”

The start of the trail is rather level going through lush rainforest, but the pathway soon starts to head up at steadily steeper gradients. Quality views were lacking for most of the hike to the guesthouse, and I found myself exerting more and more energy as we climbed a series of sharp, steep steps. After a few hours, I was huffing and puffing like a husky asthmatic.

“Are you alright?” the guide asked.

That made me feel worse.

In the year previous, I hiked Machu Picchu in Peru, Torres del Paine in Chile and Fitz Roy in Argentina. I fared well on each, which is why my near-constant hyperventilation surprised me. Then, to make matters worse, one of the straps on my backpack broke.

“Dammit!” I said. I looked at the backpack pondering a solution, but I saw none.

“Let me try,” the guide offered. He too struggled to fix the broken strap and finally threw the good strap over his shoulder. “I’ll carry it.”

“I’m embarrassed enough by my poor showing on the mountain,” I said emphatically. “I can’t let you carry my bag, too.”

“Thank you,” I said sincerely, “but I must insist on carrying it.”

As I reclaimed the backpack, I thought to myself, “I must really look pathetic.”

By late afternoon, we exited the denser rainforest, and the rich greenery gave way to rockier terrain. We were soon enveloped in cloud cover, but waterfalls and other sights came into view through breaks in the vapor. Finally, shortly after breaking the cloud cover, we arrived at Laban Rata. 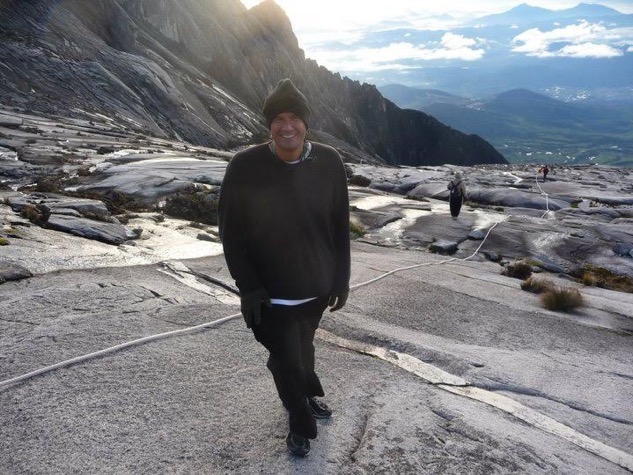 The large complex had several rooms packed with bunk beds, and I shared a room with a friendly Slovakian couple. After securing a lumpy bed, I rushed outside to take pictures of the epic sunset. Just below the lodge, a solid bed of cotton-shaped clouds stretched as far as the eye could see, and the sun’s rays illuminated both the sky above and the clouds below. Later, after the guesthouse served a buffet dinner, I braved an ultra-cold shower that made me feel like Tim Robbins in an ice-filled tub a la Jacob’s Ladder.

As my eyelids slowly creaked open, I saw a blurry image of my guide. In order to reach the summit for sunrise, we needed to depart by 2 a.m. No joke. I had set my alarm for 1:55 a.m.

I rolled out of bed already dressed, save for my shoes, and we set out among the first hikers. Inside the lodge, it was nothing if not chilly, but at least it lacked the wind-chill factor that awaited us outside. Furthermore, rain and cloud condensation made the rocky pathway more slippery, which became more problematic as the path started to incline at a ridiculously steep angle.

“Here, grab this,” said the guide, handing me a thick white rope that stretched up the mountain disappearing into sheer darkness.

I utilized the rope to maintain balance and pull myself up. I soon realized the mistake I made packing non-waterproof gloves. The moisture soaked right through, making me feel that much colder. We also passed the occasional obstruction that required more complex hiking maneuvers, but after three bone-cold and excruciating hours, we reached the summit. With the sunrise still 20 minutes away, I curled up in a corner and tried to stay warm. My teeth were rattling.

“Are you okay?” asked the guide, shaking me. I had briefly fallen asleep.

“The sun is about to come up.”

Standing, I immediately saw the rays starting to break in the distance, and my near-numb fingers fumbled for the camera. Over the next 10 minutes, I fired off shot and after shot capturing the sunrise at every stage, and when the rays started to illuminate the summit, my guide took a few photos with me in the foreground. I then packed the camera and simply enjoyed the rest of the sunrise and gazed at all the peaks and rock formations around us.

As the colorful reddish-orange rays faded and daylight rolled across the jungle terrain below, John asked, “Shall we go?”

I nodded, and we began the descent. A few minutes later, I got a better view of the rock path below and asked, “We climbed up that?” The guide just laughed.

The mountain face was even steeper than I originally thought. Surprisingly, some hikers were still ascending, either having trouble with the climb or simply oversleeping. Then we reached one of the more difficult spots—a rock ledge we had to shimmy across—with a treacherous drop below. In the pitch black, I never saw what I was up against, but now it was crystal clear.

When we approached the ledge, we heard a frustrated male voice snap, “Just do it. You’ll be fine.” A moment later, we saw a horrified woman on the ledge with the guide positioned below trying to move the woman’s feet a few inches at a time. Tears rolled down her whimpering cheeks, and her partner only made the situation worse.

“You are embarrassing me,” the man said.

“My girlfriend is Colombian,” I whispered to my guide. “If I ever said that to her, she’d push me off that ledge herself.”

“I am certain they will have a conversation about this later,” John laughed.

With the traffic jam ahead, my guide unfortunately motioned for us to take an even trickier ledge to get by. At that moment, I knew how the woman felt, but I forced myself to do it making certain I never looked down even for an instant.

As we got back to the rope, the views were magnificent, but I wrongly assumed the hike back to the Timpohon Gate would be easier. Tall steps make up significant parts of the trek, and climbing down them was actually more difficult than going up. With each step, pain grew increasingly sharper in my kneecaps, and I could feel my entire legs tightening up. By the time we reached the gate, I looked like a gimpy 80-year-old man who just ran a marathon.

“I feel terrible,” I said, finally able to laugh again.

After thanking and tipping my guide, I jumped into a waiting taxi and headed 25 miles away for my reward, the Poring Hot Springs, a hot spring complex built by Japanese occupiers during World War II. I spent the next two hours soaking in the forest-encircled hot tubs, but unlike most old men at the spa, I opted for the bathing suit over the birthday suit… and not just because my birthday was yesterday.

David Jenison is a Los Angeles native and the Content Editor of PROHBTD. He has covered entertainment, restaurants and travel for more than 20 years.