Next month, Doctor Who embarks on one of its greatest leaps through time with the premiere of its eighth season, which will carry the venerable British science fiction show to its 50th anniversary next year. But some fans of the Doctor who live in New York will be getting a sneak peak of “Asylum of the Daleks” this Saturday, along with a Q&A with cast and crew.

At least 11 actors have played the title role of the whimsical Timelord who travels the cosmos in a vehicle that resembles a blue police box—a mid-century English artifact that would’ve been long forgotten were it not for the show. Thanks to low budgets and poor video quality, most of the early seasons are real eyesores, but Russell T Davies’ 2005 revival brought Doctor Who into the 21st century with sci-fi spectacle, humor and an irrepressible spirit that puts Star Trek and Star Wars to shame. Here are the Top 10 stories—some in two-parts—since Davies and subsequent show-runner Steven Moffat regenerated the Doctor. 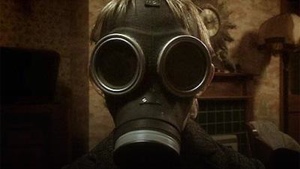 10. “The Empty Child/The Doctor Dances”
The best of the Doctor’s adventures in Earth’s history involve London, especially in times involving the 20th century’s wars. This intriguing outing with Christopher Eccleston’s ninth doctor envisions London during the Blitz, haunted by an apparition resembling a small child in a gas mask. These episodes significantly introduce John Barrrowman as “omnisexual” Captain Jack Harkness, who’d anchor the spinoff series Torchwood. Eccleston, with his black leather jacket, crewcut and enormous grin, makes a likable, underrated Doctor, and it’s a shame the revived show didn’t really take off until after he left. 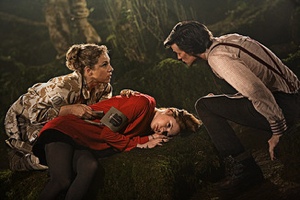 9. “The Time of Angels/Flesh and Stone”
Moffat took inspiration from the relationship between the movie Alien and its sequel Aliens for this action-oriented return of The Weeping Angels. Smith hits his stride as The 11th Doctor and the story features one nail-biting set piece after another. The two-parter also marks the return of Alex Kingston’s mysterious, swashbuckling River Song (introduced in “Silence in the Library,” also terrific), who may be one of the strongest and most appealing characters in TV science fiction. 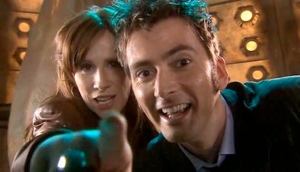 8. “The Stolen Earth/Journey’s End”
Speaking of space opera, Davies’ delivered his most sprawling story when the Daleks, the Doctor’s pepperpot-shaped adversaries, relocate the planet Earth as part of a scheme to destroy reality. The Doctor and Donna engage in interstellar mystery to find it while practically every companion and family member in the show’s continuity take on the invaders. Occasionally Davies’ season finales push The Doctor into over-the-top, messianic directions, but “The Stolen Earth/Journey’s End” features spectacular adventure as well as a heartbreaking turn of events for a beloved character. 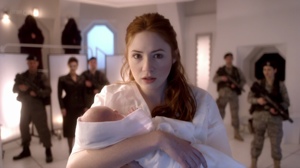 7. “A Good Man Goes to War”
The show’s most thrilling pre-credits montage ever leaves the viewer with goosebumps, and the pace never lets up from there. The 11th Doctor and Rory (Arthur Darvill) rescue kidnapped Amy from intergalactic bad guys in a dizzying space opera that introduces fascinating new villains and intriguing allies (including a Sapphic, reptilian humanoid who may have killed Jack the Ripper). Filled with Monty Pythonesque quips and thrilling action scenes, “A Good Man Goes to War” concludes by revealing the identity of Alex Kingston’s beloved character River Song. The follow-up, “Let’s Kill Hitler,” doesn’t quite follow through, but that’s no knock on “Good Man.” 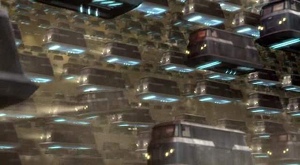 6. “Gridlock”
Hitchhiker’s Guide to the Galaxy author Douglas Adams wrote for Doctor Who during the beloved Tom Baker’s stint as the Fourth Doctor, and the show has retained a penchant for outlandish sci-fi satire. “Gridlock” floats the giddiest premise when The 10th Doctor and companion Martha Jones visit the dystopian city of New New York and discover a population that lives in their vehicles in traffic jam that has lasted for decades and involves only inches of travel per day. Featuring oversized monsters and breezy jokes, “Gridlock” takes a surprisingly poignant detour when the city’s commuters unite to sing the old-school hymn “The Old Rugged Cross.” 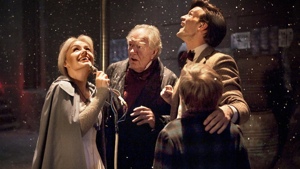 5. “A Christmas Carol”
The revived Doctor Who has made a tradition of Christmas specials, with this one from 2010 generating the most laughter and tears. When planetary plutocrat Karzan Sardick (Michael Gambon, a.k.a. Professor Dumbledore) refuses to thwart a potential disaster, the 11th Doctor uses the TARDIS and Charles Dickens’ premise to engineer a change of heart. The episode embraces the show’s cheeky sense of humor—Dickens’ original, of course, did not involve a flying shark—and deserves to be watched every year alongside the best holiday specials. 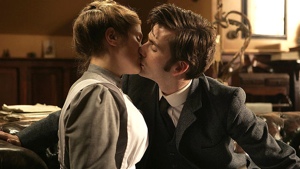 4. “Family of Blood/Human Nature”
Pursued by malignant aliens called the Family of Blood, The 10th Doctor hides out by transforming in mind and body into a teacher at a 1913 boarding school, with no inkling of his real identity. When the Family tracks him down, The Doctor must choose between resuming his lonely duty as Earth’s champion, or experiencing human life and love with a fellow teacher (Spaced’s Jessica Hynes). The potential humor of a horde of shambling scarecrows besieging the school takes a dark turn when the episode links the likely fate of the schoolboys to the coming of World War I. 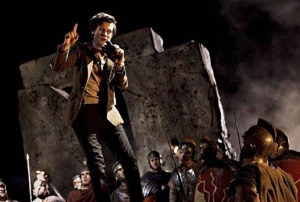 3. “The Pandorica Opens/The Big Bang”
When Moffatt took over as show runner, he retained Davies’ concept of the Doctor as a “lonely god” but heightened his parallels with the many whimsical heroes of English storybooks—without lowering the show’s dramatic stakes. Matt Smith ends his first season as 11th Doctor with a story in two sharply dissimilar chapters. “The Pandorica Opens” delivers a portentous sci-fi adventure involving Stonehenge and familiar faces from The Doctor’s rogue’s gallery. “The Big Bang” pivots to time-travel slapstick, and then culminates with a touching bittersweet climax hinging on The Doctor’s relationship to companion Amy Pond (Karen Gillan). 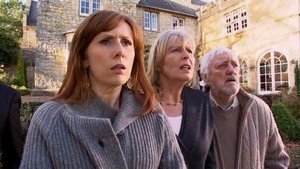 2. “Turn Left”
Unlike “Blink,” this “Doctor-lite” episode hinges on viewer familiarity with the show’s recent history. Donna Noble (Catherine Tate, a recurring player on The Office), the 10th Doctor’s most formidably comic companion, experiences an alternate reality in which she never saved The Timelord’s life, leaving the Earth defenseless in the face of cosmic calamities. Davies’ script offers a downbeat-but-fascinating perspective on the consequences of Earth-threatening disasters, from the point of view of ordinary bystanders. “Turn Left” features one of several great supporting turns from Bernard Cribbins as Donna’s grandfather Wilf, and sets up the fourth season finale “The Stolen Earth/Journey’s End.” 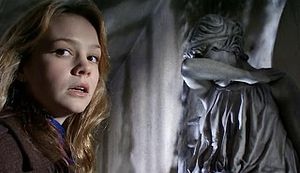 1. “Blink”
One of the most popular Doctor Who installments in the show’s history, “Blink” provides a rare example of a show’s best episode also being the best gateway for newcomers. David Tennant’s 10th Doctor barely even appears in it: instead, “Blink” follows Oscar nominee Carey Mulligan in a one-off appearance as a young Londoner at the center of bizarre events involving time travel, DVD Easter eggs and terrifying, statue-impersonating aliens called The Weeping Angels. With great jokes and puzzle-box plotting, “Blink” provides an ingenious variation on the traditions of British horror.

More from Doctor Who