Mystery Science Theater 3000 featured many movies over the course of its decade on the air. However, they largely fell into only a few genres, perhaps none of which features more cheap, bad films than what we call “the monster movie.” (As for how to define “monster,” humanoid aliens, as in Teenagers from Outer Space, don’t count, but giants versions of actual creatures do; the worms from Squirm don’t qualify, but they were really gross and wouldn’t have made the list anyway.) Mystery Science Theater 3000 showed a ton of monster movies, especially after it made the move to the Sci-Fi Channel (now Syfy), which wanted film choices to be more, well, science fiction-y. A bunch of wonderfully crummy movie monsters were showcased on Mystery Science Theater 3000, but these are the 10 that scrape the bottom of the barrel—the worst movie monsters ever lampooned by the crew of the Satellite of Love. 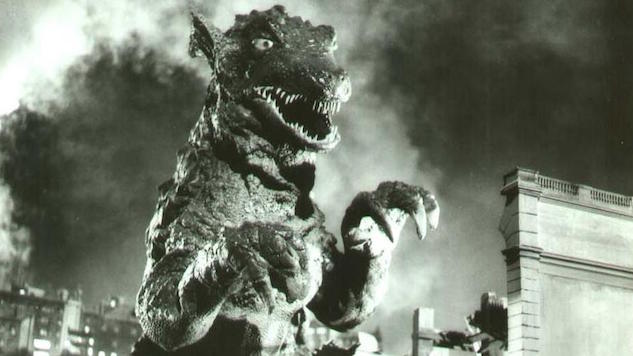 They showed a couple of Godzilla movies on Mystery Science Theater 3000. They weren’t good, but Godzilla is too cool and iconic to make this list. Gamera showed up a bunch too. He’s a cheaper, worse version of Godzilla, and also a turtle, but he’s still too good for this list. Gorgo, though, is just a straight up Godzilla rip-off. The only difference is that he’s in London. Gorgo makes the list for the utter lack of originality.

9. Weird Atomic Beasts Who Live Off Human Blood, from The Horror of Party Beach (Season 8, Episode 17) 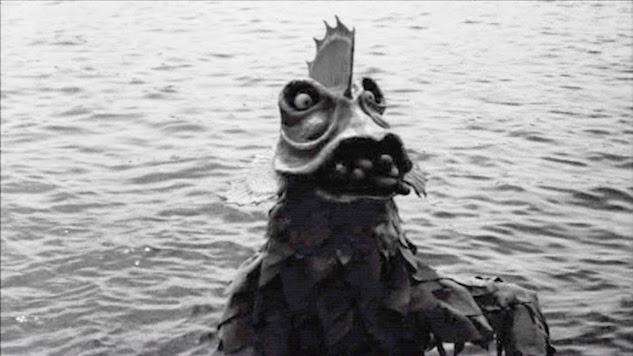 The “weird atomic beasts” thing is from the movie poster. They are basically weird fish men, like Gillman from Creature from the Black Lagoon. They are effective monsters, as they do manage to kill a lot of teenage girls. However, they are also killed by sodium, which is pretty lame. Living in salt water but being able to be killed by sodium does not make for a good, or logical, monster.

8. The Giants Spiders, from The Giant Spider Invasion (Season 8, Episode 10) 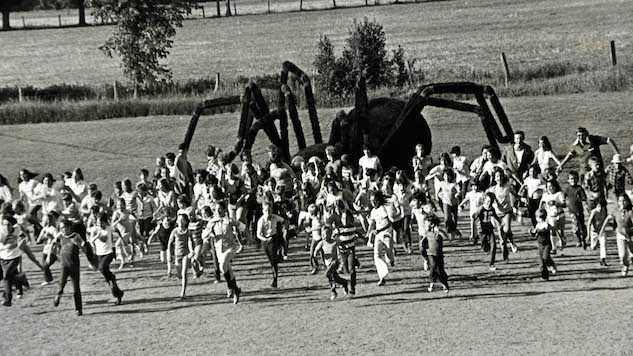 They featured multiple spider movies on Mystery Science Theater 3000. The Giant Spider Invasion has the worst spiders though. The puppet ones are pretty cheesy looking, but the best is the “giant” spider made out of a car. They put some black fur on a Volkswagen and threw some legs on it. You can tell. Not even the Skipper himself, Alan Hale Jr., could save this film. This episode is remembered for its “Packers won the Super Bowl!” riffs, but it’s also rightly remembered for the spider car. 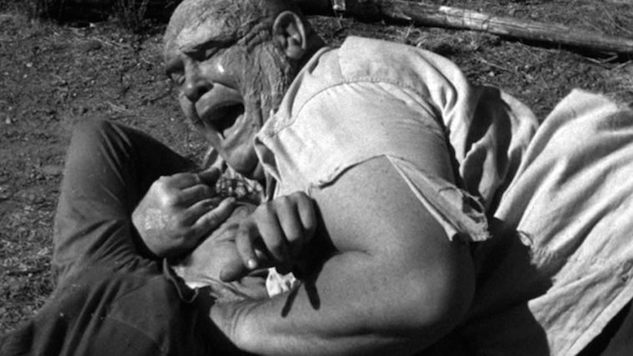 This one is a nice double whammy, because we get to cover both Tor Johnson and Coleman Francis in one fell swoop. Three terrible Francis films were included on Mystery Science Theater 3000. Johnson, who was a frequent collaborator of Ed Wood, appeared on a few as well. Here, Johnson and Francis joined forces to create one terrible movie monster. Johnson, amazingly and briefly, plays a Soviet scientist before radiation turns him into the titular beast, a grossed-up version of Johnson that played into his limited acting range, which left him playing lumbering, largely silent oafs. Radiation was a real problem in a lot of Mystery Science Theater 3000 movies. Johnson can’t act, and looks silly, and Francis can’t direct. Together, they create one memorably bad character. Surprisingly, this awful movie was co-written by Bill Finger, who was one of the creators of Batman. This is a less successful effort, telling the tale of a man who gets a moon rock (oh wow!) lodged in his brain. For some reason, this makes him occasionally turn into a lizard man who kills people whenever the Moon comes out. He looks completely ridiculous, and he moves around in a clumsy way. However, he gets some points for his death, wherein his buddy Johnny Longbow shoots him with an arrow made out of the original meteorite, which makes him explode. Not enough monsters explode.

The poster for The Killer Shrews shows a shrew tail slinking over a high-heeled shoe, with a splash of blood nearby. This is not reflective of the movie. The giants shrews of this film may be the funniest of any Mystery Science Theater 3000 movie. Up close, they are goofy looking puppets. However, it’s the “action” shots of the shrews that are the best. The “shrews” are clearly just dogs with, like, carpet dumped on top of them. They look so fake and ridiculous. The only reason they aren’t further up the list is because giant shrews aren’t a particularly novel idea, and because dogs in costumes just don’t have the same panache as the monsters higher on this list. 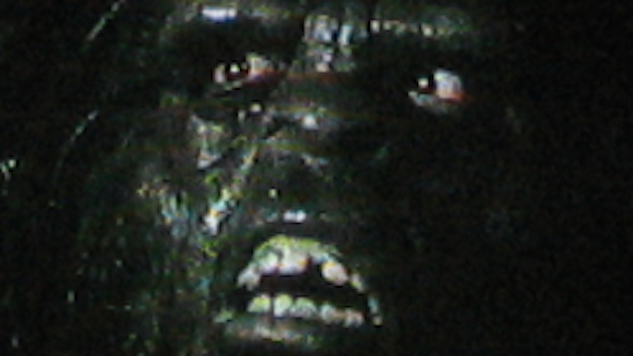 The original The Legend of Boggy Creek is actually a pretty notable little film. It’s a fake horror documentary that came out years before The Blair Witch Project, and made $20 million on a $160,000 budget. Boggy Creek II, which is the third movie in a series, is not notable and is bad. All of the movies involve looking for the Fouke Monster, a.k.a the Boggy Creek Monster, which is basically a Texarkana Bigfoot. There is a big one and a kid one. Both of the costumes look really fake, and also we probably don’t see them enough. Maybe because they look so fake. The story behind The Creeping Terror is fascinating and deserves discussion. This movie was so insane they made two movies about its making, The Creep Behind the Camera and CREEP! Vic Savage produced, directed, and starred in the film. Basically, the story goes, he was a con man who disappeared while the movie was still in production. Also, he was probably abusive and maybe thought he was God? Anyway, the monster in the film is basically a rug that eats people. It looks so stupid, and it takes forever to get anywhere. It eats a lot of women and their legs dangle and kick out of its mouth. It feels fetishistic, and it’s really unpleasant. In terms of sheer dull incompetence, this is the worst movie monster from the show. Its only saving grace is that a better-looking monster was reportedly stolen before production began and they threw this one together. 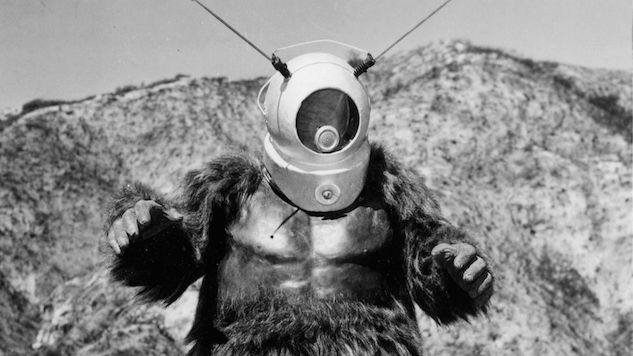 Ro-Man gets points for effectiveness: He kills almost every human on the planet. But he loses those points because this truly awful movie ends with it all turning out to be a kid’s dream after he conks his head. Ro-Man is one of the most iconic bad movie monsters. Joe Dante is a fan, and put him in his Looney Tunes movie. He’s a robot, but he looks like a gorilla. He wears what appears to be an old-school diving helmet with antennae attached to it. You can only kind of see his face. The acting is pretty interestingly bad. Ro-Man is terrible, but he’s a lot of fun. He’s also the only fun thing in an otherwise incredibly boring movie. It’s enough to make you wish that Ro-Man had wiped away all of humanity, making the movie shorter and less dull.

1. The Hobgoblins, from Hobgoblins (Season 9, Episode 7) 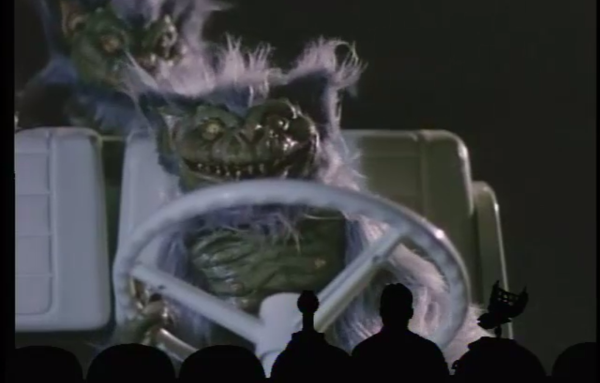 Hobgoblins is maybe the best Mystery Science Theater 3000 episode. There is so much that makes them so bad. For starters, they are some of the worst looking, most unrealistic puppets you will ever see. Just seeing them makes you laugh, and when one of the actors is fighting them, it’s even better. They drive a little car at one point! They have a power, which is they sort of make people hallucinate their deepest fantasies, and then they kill them. They get caught in a movie vault for many years. Everything about the hobgoblins is stupid, but delightfully stupid. However, just because you laugh at them doesn’t make them any less terrible. They are the worst movie monsters in Mystery Science Theater 3000 history.