Parks and Recreation should have been a failed experiment. It should have failed to follow in the imposing footsteps of Greg Daniels and Michael Schur’s previous series, The Office. The only reason it failed to fail is because, after a bumpy first season (which was, frankly, off-putting), it never felt right to describe the show as “Greg Daniels and Michael Schur’s Parks and Recreation.” It was Leslie Knope’s Parks and Recreation. Tom Haverford’s. Ben Wyatt’s. Li’l Sebastian’s. The workplace political satire-turned-heartwarmer was built on the relationships of its eccentric yet utterly believable characters.

The optimism and enthusiasm of everyone at the Pawnee, Ind. Parks Department is contagious, even if that enthusiasm is generated by impeding the progress of government. Over the course of the series’ seven-season, 125-episode run, the friendships, romances, and business ventures among the ensemble were hilarious in their strangeness and even more fun to watch as the show aged into its cast’s rapport like a townie becoming a regular at a favorite diner.

Parks and Recreation became the comedy blanket that viewers would wrap themselves in through repeated binge sessions on Netflix, making the episodes and characters as familiar as family. That makes picking the series’ 20 best episodes tough, but like Chris Traeger fighting off illness, I will persevere. If your favorite episode didn’t make the cut, feel free to find me online and give me a piece of your mind, but know that I, too, subscribe to Leslie Knope’s notion that “What I hear when I’m being yelled at is people caring loudly at me.” Watch, laugh, and care along with the 20 best episodes of Parks and Recreation. 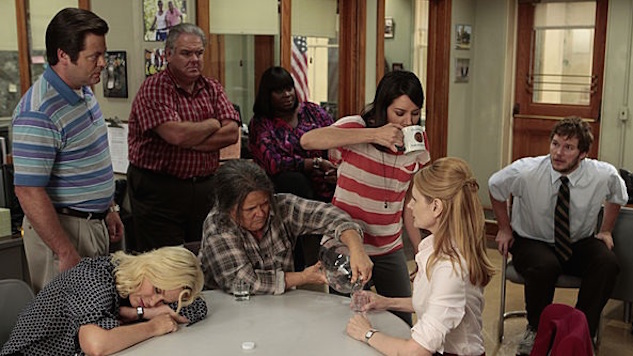 The sheer amount of Tammys in this episode is enough to warrant its place in the top tier of Parks and Rec episodes, but their actresses (the legendary Patricia Clarkson, Megan Mullally, and Paula Pell playing Ron’s two ex-wives and his mother, respectively) make the battle for Ron’s soul an excruciating, revealing delight. Tom and Jean-Ralphio’s hiring of Detlef Schrempf and Roy Hibbert as their personal basketball escorts is just sadness icing on an already ludicrously screwed-up cake. 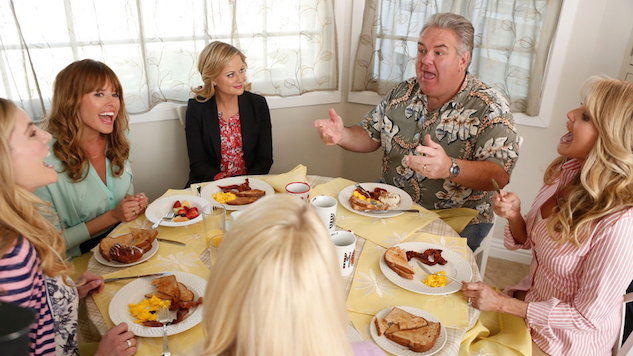 Four decades of Jerry/Garry/Larry Gergich’s government work come to a brief end in this episode, only to prove that the man is almost as amazing as Leslie’s efforts to celebrate him. This is the episode that pushes the Hanna-Barbera silliness hardest, while Jerry brings inept-yet-blissful, Mr. Magoo-like destruction all around him. Sweet, simple, and as slapsticky as the series gets.

Ron winning the “Woman of the Year” Award is one of the first major instances of Ron and Leslie’s relationship solidifying into something beyond boss-employee. The other characters push their personalities past their initial sketches, finding stupid yet warm solutions to off-the-wall problems like Tom wanting part ownership of a bar and Andy being temporarily homeless. It adds up to one of the first episodes to show what Parks and Rec was capable of.

In “Hunting Trip,” Ron gets shot in the head—and it’s not even the most exciting part of the episode. That honor goes to April and Andy sharing their first romantic interaction, laying the groundwork for one of the most insane, ill-advised, and intoxicatingly indifferent relationships in sitcom history. In doing so, it finds romance while cleverly tackling sexism in the guise of a mystery. Who cares who shot J.R.? Who shot Ron Swanson?! 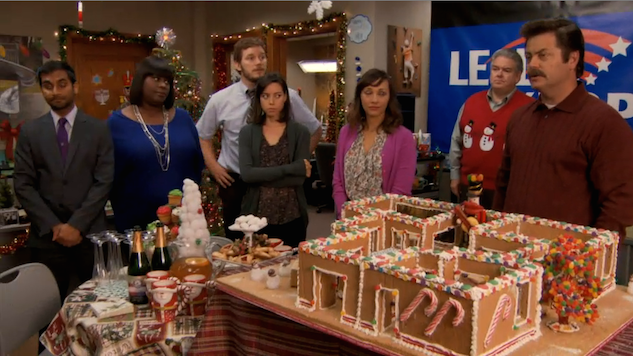 Ben may give a great job interview, but it’s the coming together of the entire cast in support of Leslie’s ambitions that makes this episode great. It’s an over-indulgent Christmas episode that feels inventive because it allows every character to match the intensity of its central workaholic—even Jean-Ralphio pitches in, saving the day. 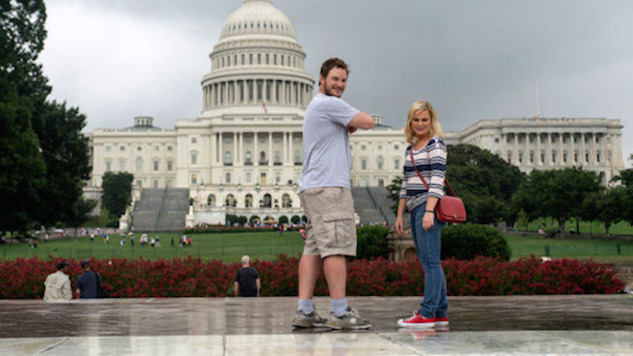 Whatever soul allowed Andy to go to D.C. is now responsible for Chris Pratt’s movie career. We wouldn’t have that scruffy velociraptor trainer heading up the Jurassic World sequels without the ultimate stupidity of Andy in the heart of American politics. The barbeque in this episode is also funny, but this is simply a great, cameo-heavy episode overshadowed by its side character’s future career. 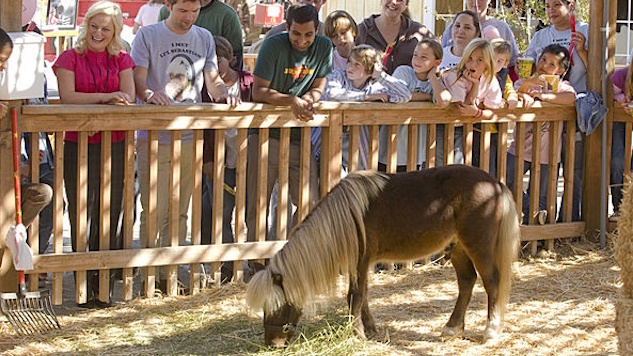 Bye bye, Li’l Sebastian. You’re the tiny horse at the center of all our hearts (expect Ben’s). Your passing is one of the two times Ron Swanson ever cried and forms the basis for the excellent song “5,000 Candles in the Wind.” But your panegyric episode also kickstarts Leslie’s political career and provides plenty of excellent jokes on top of the heart-rending death of Pawnee’s mascot. 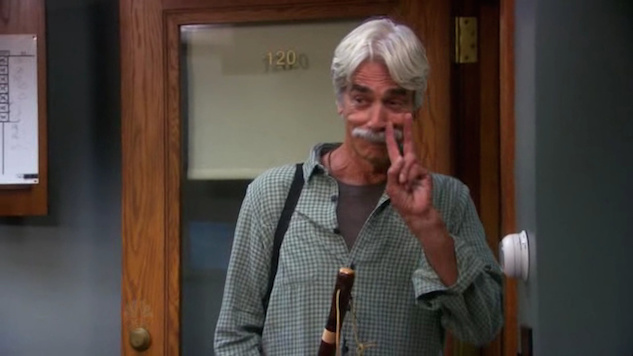 Episodes that play off of just how well we know the characters are inevitably going to feel good, even if they’re as gimmicky as introducing just-off mirror versions, because they make us feel attached show. Enjoying the contrasts and similarities between the Eagleton team and the Pawnee squad is clever, satisfying, and brief enough not to overstay its welcome. Besides, anything with Sam Elliott as a hippie is perfect in my book. 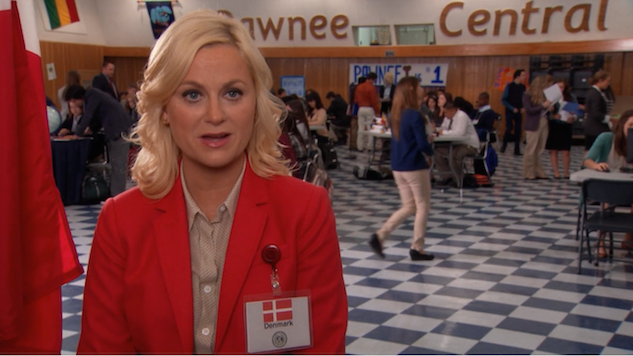 Model U.N.! Let pettiness reign in the best episode about Ben and Leslie’s break-up. The selfishness, anger, and raw honesty between two smart, hurt characters produces so much comedy that I feel a little guilty about it. There are crushing conversations and completely crushing geopolitical victories. The jokes are good, but the relationship commentary is even better, all with one of the most creative set pieces of any entry in the series. 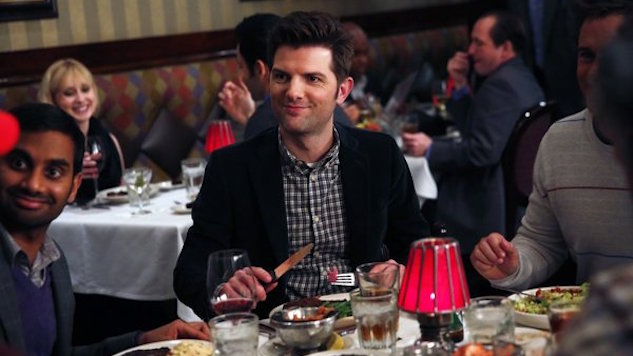 The pre-wedding parties, both bachelor(s) and bachelorette, see friendships expressed through indulgences. None of these boys really gives a damn about the others’ interests. But playing football with some Colts, Settlers of Catan with some nerds, and Chris’ emotions against his self-doubts creates one of the series’ sweetest episode-long montages. And Leslie spends her time celebrating pre-marital bliss the only way she knows how: dealing with zoning issues. Priceless. 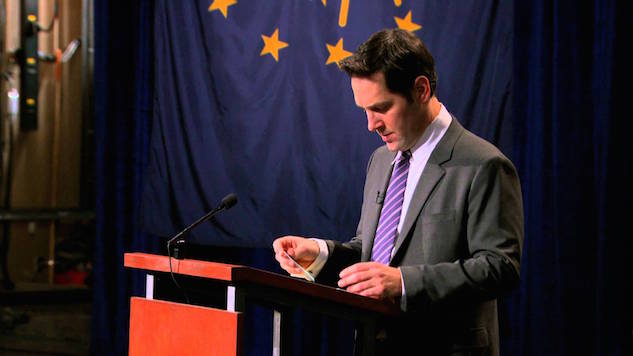 If you’re going to watch one episode featuring Paul Rudd’s Pawnee city council candidate Bobby Newport, make it this one. His lines are amazing, featuring the untoppable “I guess my thoughts on abortion are, you know, let’s just all have a good time.” The other candidates debating Leslie for the council seat are just as strong: Brandi Maxxxx, Fester Trim, and Manrico Della Rosa give Newport a run for his money, while Andy’s B-plot movie reenactments are almost as good as the political satire. 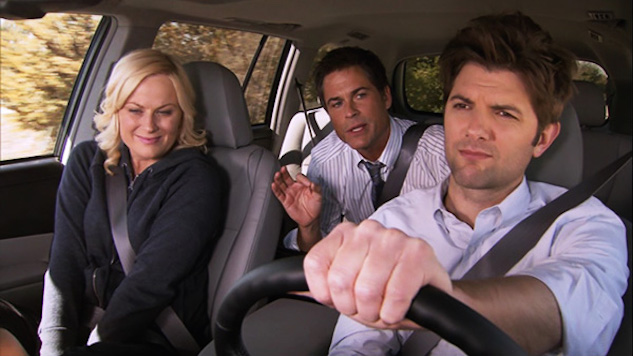 Many of the best Parks and Rec episodes are those that act as major milestones in the series’ core relationships, since those relationships form the loving pillars the jokes and references decorate. “Road Trip” features the Knope-Wyatt power couple’s first kiss. The back-and-forth cadence that the series would maintain until its finale here finds its solid first refrain. Also, Ron gives a child a land mine. 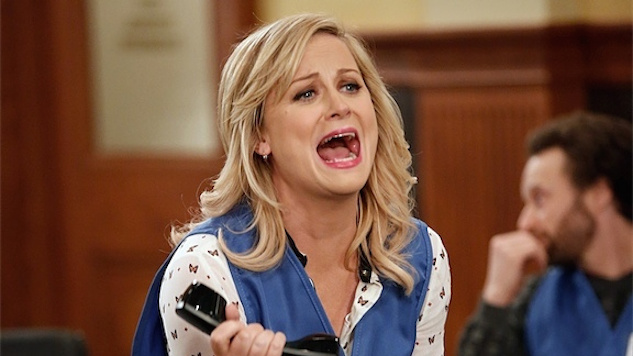 Another of the “silly government exercise allows for extrapolated soul-searching” episodes, “Emergency Response” makes disaster training into an exciting confrontation with the future. Hooray! Councilman Jeremy Jamm gets some primo antagonism, the boys in Animal Control show up (RIP Harris Wittels), and everyone has perhaps TOO good of a time considering the seriousness of the topic.

“The Fight,” a.k.a. “The Episode Where Everyone Gets Piss-Drunk” is one of the most quotable, GIF-able episodes in a series that rode the internet’s obsessive waves of quoting and GIF-ing at their crests. Coupled with some of the best drunk writing and over-the-top acting from cast and crew, and the ballad of Snake Juice becomes a legendary night. 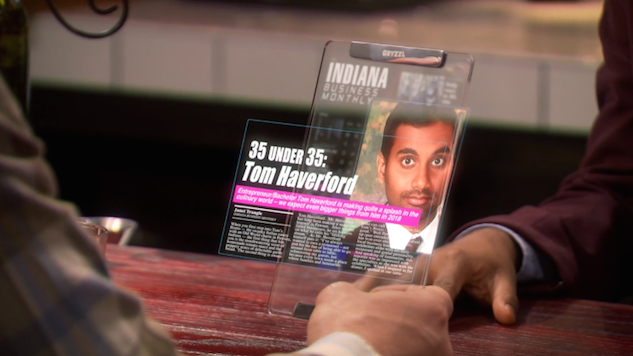 The premiere of the final season is a ballsy time hop in a series that really didn’t need to take any risks. Thankfully, it pays off. Putting so much faith in its audience’s dedication to its characters, the show pushed the “Where are they now?” credit sequence freeze-frames of the 1970s and beyond into a season-long epilogue with more complexity and effortless closure than anyone could have imagined. 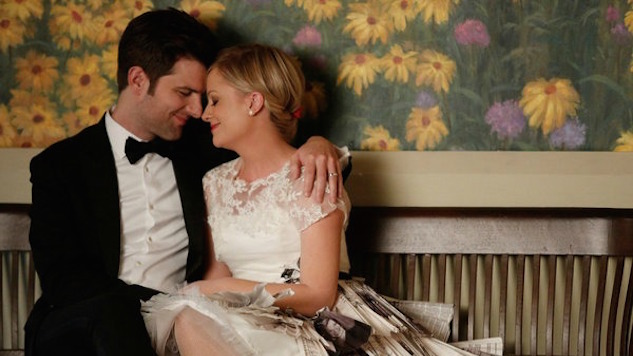 It’s the wedding. It’s perfect. That is all.

As much as I love Amy Poehler’s unstoppable workaholic, Parks and Recreation never fully found its footing until state auditors Ben (Adam Scott) and Chris (Rob Lowe) showed up in Season Two’s penultimate episode. Activating the untapped potential in the show’s seething bureaucratic core (like Knope’s desire for a tight, compact body), these auditors let the department bond over a charismatic pair of common enemies while introducing two of the best sitcom characters ever created. 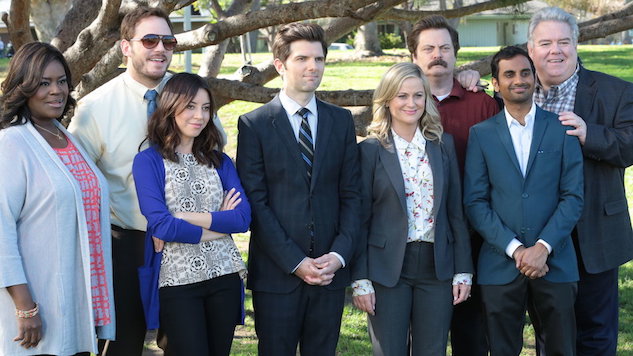 The series finale wrecked you. No matter how you look at it, something got you. It takes the season’s gimmick to even greater heights, luxuriating in futuristic speculation while writing out the entire lives of its characters like it was a twentysomething on Tumblr. Couching it all in the simplicity, honesty, and purity of fixing a park’s swing only made the tears flow faster. 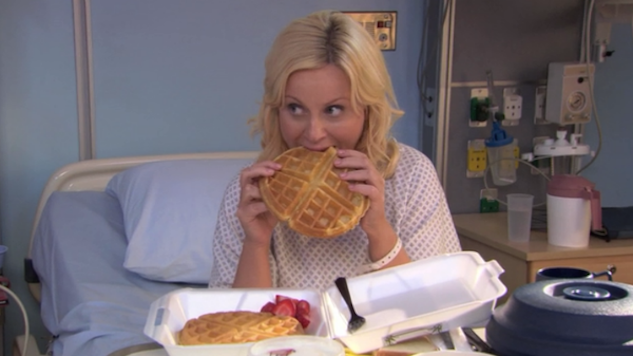 “Stop. Pooping.” With two words, Rob Lowe cemented himself as a comic wild card for the series. In one of the funniest episodes Parks and Rec ever aired, disease is the instigator that upends everyone’s preconceived notions. Chris becomes approachably imperfect, while Leslie shows off the never-say-die dedication that first attracts Ben to her. That everyone’s delirious the whole time only makes it more impressive that the writers managed to stuff so many relationship developments into a plot so hilarious. 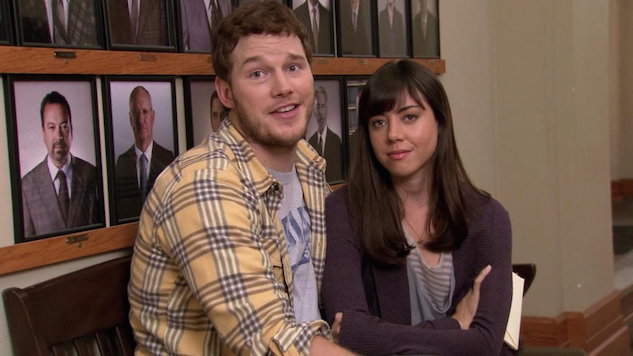 The best episode of Parks and Recreation has everything the series does well, packaged into a joyous piece of ridiculousness masquerading as a low-key affair. Ron bonds, April and Andy turn their impassioned recklessness into a lesson in spontaneity, Leslie’s stubbornness gives way to empathy, and Ann basks in Donna’s aggressive singleness. But apart from the one-liners (which are incredible) and the secondary character interactions (Jean-Ralphio!), the episode finds the tear-jerking heart in the show’s silliest couple—making the developments between Ben and Leslie feel all the more entwined and important.

Jacob Oller is a writer and film critic whose writing has appeared in The Guardian, Playboy, Roger Ebert, Film School Rejects, Chicagoist, Vague Visages, and other publications. He lives in Chicago, plays Dungeons and Dragons, and struggles not to kill his two cats daily. You can follow him on Twitter here: @jacoboller.
Tags

More from Parks and Recreation